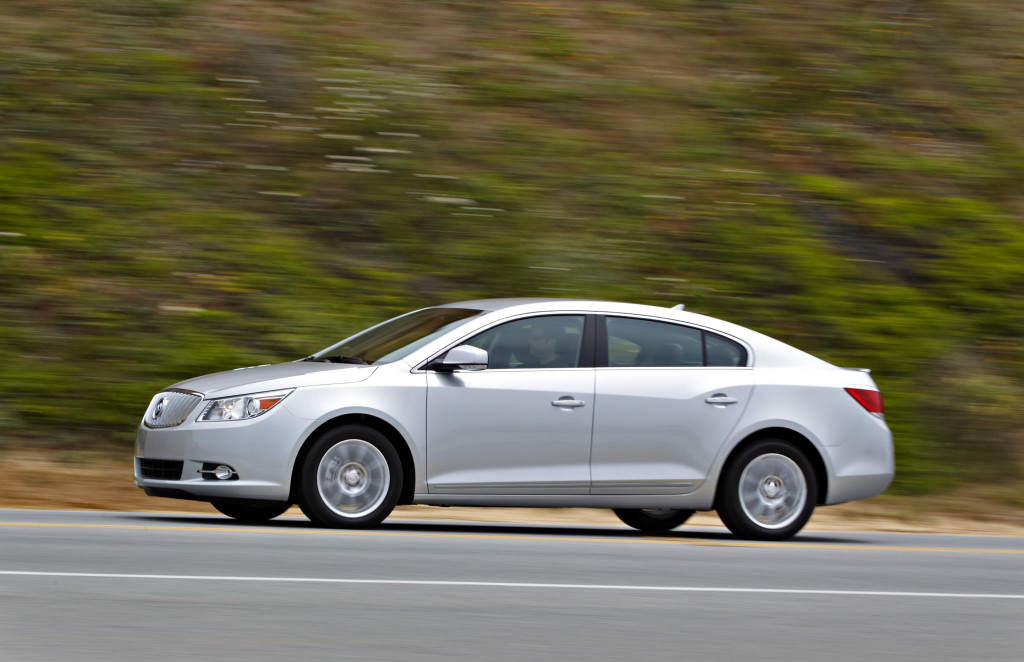 With the exception of the Chevrolet Volt and a few assorted hybrid cars, General Motors hasn’t dove into the hybrid game like cross-town competitor Ford or global rival Toyota. Enter eAssist, GM’s new hybrid drivetrain, which is standard on the Buick LaCrosse and an optional $2000 extra on the Buick Regal.
eAssist is what’s called a mild hybrid system. In a traditional hybrid, like the Toyota Prius, both the electric motor and gas engine drive the wheels, drawing power/fuel from an onboard battery pack and a tank of gas, respectively. In a mild hybrid like the LaCrosse or Regal eAssist, the electric motor is simply there to supplement the gas engine under hard acceleration or at high speeds.
The benefits of this approach are that mild hybrids are less complex, lighter, more affordable, and drive much more like a traditional car than a hybrid. The downside is that because the electric motor is only there to help out occasionally, fuel savings, while being a nice boost over the gas engine alone, aren’t as impressive as a full hybrid drivetrain.
Unlike hybrids from other brands, the Buicks are remarkable for their lack of fanfare. There is no exterior indication that you are driving a hybrid, except for the lack of engine noise at a standstill, thanks to the start-stop system. We have to applaud GM for not festooning the beautiful exteriors with tacky badges, graphics, or “aerodynamic” trim pieces. Both the Regal and LaCrosse are just as attractive as when they first debuted.
Inside, both eAssist cars have a few new features to monitor the extra systems. The obligatory Eco mode is available to get the most out of each gallon of fuel. The eAssist also boasts a power flow chart, similar to the one on the Chevrolet Volt, although less detailed in the amount of information conveyed. This one simply displays the ebb and flow of power between the gas engine, electric motor, batteries, and regenerative brakes. It is somewhat helpful if you are trying to maximize your economy, as it reacts quickly to the engine’s start-stop system, and lets you know exactly when you give it enough pedal for the electric motor to help out.
In terms of out-and-out performance, both cars’ four-cylinders generate the same 182 horsepower and 172 pound-feet of torque from before eAssist was fitted. The small electric motor generates a maximum of 15 horsepower and 79 pound-feet of torque. In a straight line, both the Regal and LaCrosse feel slightly faster than the 2.4-liter four-pot does on its own. The Regal eAssist is noticeably slower than the Regal Turbo, although not necessarily enough to dissuade us from picking up a hybrid. As for the LaCrosse, it’s considerably slower than the V-6 iteration, but the big boost in fuel economy is certainly appealing.
On the road, initial power is strong enough to chirp the front tires, thanks in no small part to the 79 pound-feet of instant-on torque provided by the electric motor. Mid-range grunt is quite brisk as well, although the whole setup tends to feel a bit tired by the time we reached the higher parts of the rev range. Neither car is blisteringly quick, but they can get up to speed easily, and there’s plenty of steam available for most driving situations. As for fuel economy, our 120-mile trip in the LaCrosse netted 31 miles per gallon in mixed driving. We spent more time in the Regal, covering around 250 miles, with our heavy right foot allowing us to hit 28.5 miles per gallon. Both are a bit lower than the combined average fuel economy of 30.5, but we suspect a bit more careful driving would have met or exceeded that number. Both the LaCrosse and Regal are listed as hitting 25 mpg in the city, and 36 mpg on the highway.
Power is delivered to the front wheels, not via a CVT, but a real, honest-to-goodness six-speed automatic (hooray!). This was a slick-shifting auto, delivering well-timed and quick upshifts, and downshifting appropriately. Mashing the throttle does tend to confuse the gearbox, though, as it spends a second hunting for gears under sudden heavy throttle. Drive civilly, though, and the six-speed box works fairly unobtrusively.
Where the eAssist system comes into its own is the way it handles, which is an advantage of the lighter mild-hybrid drivetrain. Despite the extra hardware, the eAssist Regal and LaCrosse weigh virtually the same as the standard versions (the Regal is 18 pounds more, while the LaCrosse is only about 6 pounds heavier). These cars handle almost as well as the standard versions, albeit with a bit less grip thanks to the low-rolling-resistance rubber. Body roll is neatly controlled, although the LaCrosse still tips a bit too much when really pushed. Diving under braking isn’t a huge problem, but it’s one we’d like to see addressed all the same. Overall, both cars are comfortable, if not overly dynamic, handlers.
Our two weeks of eAssist driving revealed a pair of cars that demonstrate a uniquely different approach to automotive hybridization. Both excelled at feeling ordinary, which, believe it or not, is a feat we almost always covet when driving eco-friendly hybrids. Well done, Buick.
2012 Buick LaCrosse
Engine: Four-cylinder with electric motor, 2.4 liters, 16v
Output: 182 hp/173 lb-ft
Weight: 3835 lb
Fuel Economy, City/Hwy: 25/36 mpg
Base Price: $29,960
On Sale: Now
2012 Buick Regal eAssist
Engine: Four-cylinder with electric motor, 2.4 liters, 16v
Output: 182 hp/173 lb-ft
Weight: 3618 lb
Fuel Economy, City/Hwy: 25/36 mpg
Base Price: $28,530
On Sale: Now
Tags:
BuickBuick Regalchevrolet volteAssistFordGeneral MotorsLaCrosseLaCrosse eAssistToyota