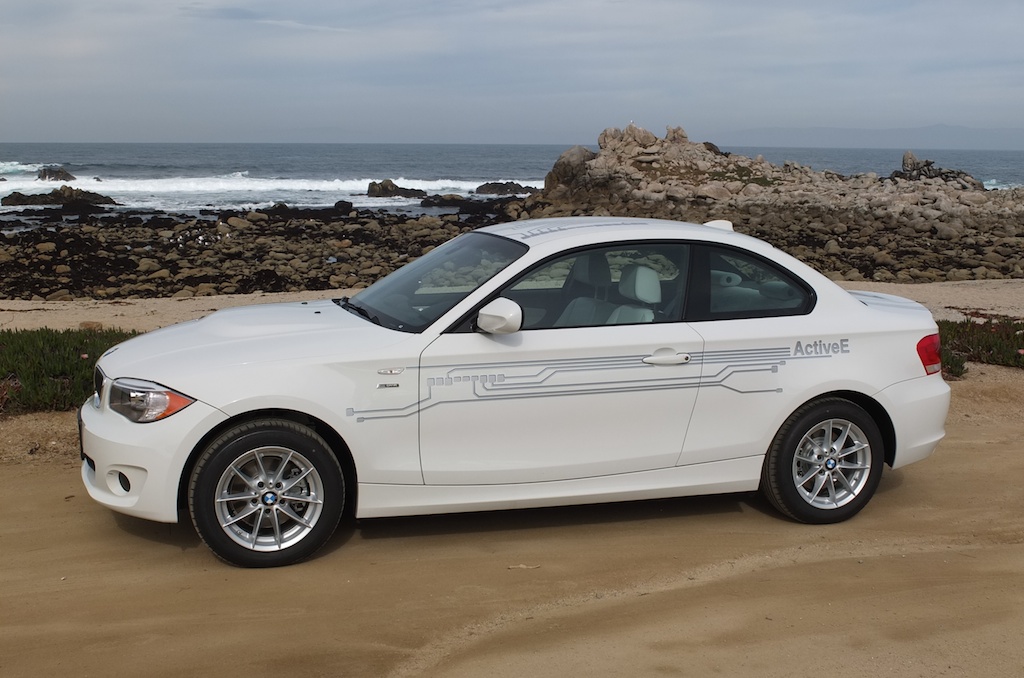 Last week, BMW began leasing its ActiveE, a pure EV based on the 1-Series platform. 700 ActiveE cars will be available to residents of Boston, Hartford, New York, Los Angeles, Sacramento, San Diego, and San Francisco. We recently had a chance to drive this test-market EV along 17 Mile Drive in Monterey, California.

Apart from the rolling-billboard paint scheme, the ActiveE appears on first inspection to be a normal, automatic transmission-equipped 1-Series. The body is essentially the same as a 128i, apart from a noticeably domed hood, and the interior is nearly identical as well, though the tachometer is replaced with a charge/discharge gauge. Further, iDrive has some views of charge data and energy utilization that don’t exist in the normal 1er.

Building the ActiveE on the 1-Series makes a lot of sense to us. The 1 is about as small and light as BMWs come, which serves to extend range and keep the price in check, while the chassis is one of our favorites in the BMW catalog. The wisdom of this choice is reinforced once underway, because the ActiveE feels agile and the sightlines are quite good—a real virtue in city driving. And, because the ActiveE has a range of about 100 miles on a full charge, an urban context is indeed the target usage pattern for this car.

[Click here to read our review of the 2012 Fisker Karma]

ActiveE handling is reminiscent of the 1-Series, as you might expect. If you’ve driven that car, the ActiveE is similar in handling feel to a 135i with the standard suspension and perhaps two passengers on board. Roll is well controlled, the ride is excellent, and the handling feels balanced at moderate speeds—although you definitely sense the mass of the car through the steering.

Most people expect the sound of an electric car to be different, and indeed it is, but we don’t think that’s primarily what the driver will notice. In part that’s because modern BMWs (and other premium cars) are pretty quiet to begin with, and in part because many of the noises that remain, in a gas or electric car, are tire noise, impact noise, and wind noise. So you don’t hear a muted-but-lovely six-cylinder engine when you drive the ActiveE, but you do hear a bit of electric motor whine. There’s a difference, but the difference doesn’t transform the driving experience.

The big difference between the ActiveE and the 1-Series, or almost any other car, comes when your roll into the throttle. The ActiveE’s electric motor produces 170 horsepower and 184 pound-feet of torque, significantly less than the 230 horses of the 128i. But hold your judgment until you read our comments on acceleration below.

An EV offers a different driving experience, in large measure through the responsiveness of the electric system. When you ask for more power, you get it pretty much immediately. We’ve remarked on this in our coverage of the Tesla: you don’t realize how much slack is in even a manual transmission performance car until you drive a good EV. And it means that comparing specs between EV and gasoline drivetrains is not a simple matter using specifications.

In the ActiveE, this responsiveness is fun because BMW has endowed the car with enough torque to make it feel fast. 0-60 miles per hour is quoted as arriving in just under 9 seconds, which is nothing special. But when you drive the ActiveE, it is the immediate availability of mid-throttle torque that you notice. Under part throttle, in town acceleration, the ActiveE reminds us of a Subaru WRX and certainly feels quicker in this scenario than a 128i. Now, to be clear, if you floor the throttle, the EV doesn’t seem so fast, which is what the 0-60 time shows. But if you step on the gas as you would in normal point-to-point driving, and the ActiveE feels quick.

As another point of comparison, the ActiveE has it all over the Nissan Leaf in fun-to-drive factor, and it clearly bests the Chevrolet Volt as well. In part that’s down to the better chassis, but a big chunk of the credit is due to putting enough torque on board to cross an emerging threshold of EV desirability.

The other economic element to consider, assuming an EV suits your driving regime, is operating cost. BMW says that the Active should use about 22 kWh per 100 miles. Electricity costs vary, but a typical 10,000-mile driving year should cost about $325 for electricity in the states where the ActiveE is offered. That compares with about $1500 per year for gasoline for a 128i. Not bad.

Let us be clear: this is an enjoyable car and, if you like the BMW brand, a good deal. The only restrictions are that you have to be a household in which a range-limited, two-door coupe works.