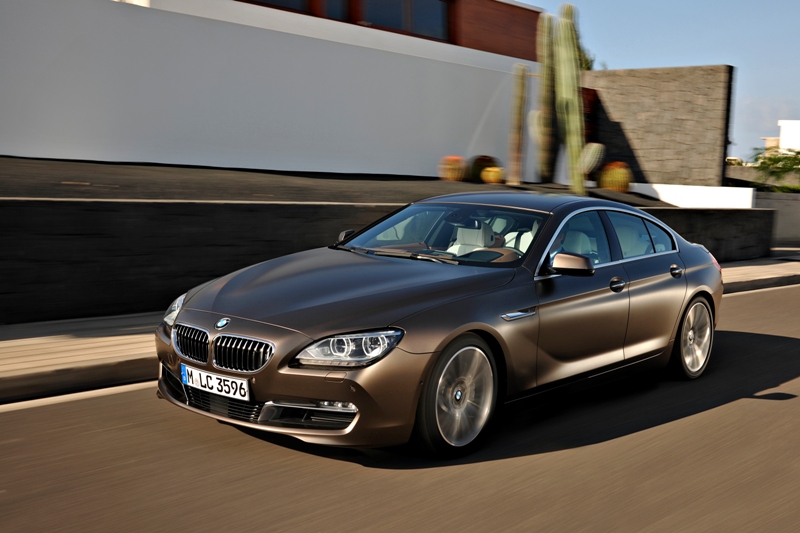 —Santa Barbara, California
Just forget about arguing against the purity of the “four-door coupe” concept. We curmudgeonly car folk do like to keep definitions straight, but the truth of the matter is that the normal car-buying public has long since spoken with their dollars in favor of these slinky not-sedans.
With the notable exception of the Volkswagen CC, most of these extraordinarily endowed coupes live in the high-middle of the premium segment. The Mercedes-Benz CLS is the poster child and progenitor here, and Audi’s A7 and Porsche’s Panamera also play in the space. (Aston Martin has a lovely four-door coupe in the Rapide, but at $200,000 or so, it hardly competes with the rest of this lot.)
[Click here to read our review of the 2013 BMW M6]
All of those German cars are pretty great to drive, ride in, and look at, so we knew going into our time with the all-new BMW 640i Gran Coupe that the bar set was a high one indeed.

Of course, knowing the track record of BMW, it’s no real surprise that the Gran Coupe lived up to the standard set by Mercedes, et al. in terms of ride quality and overall on-road poise.
We drove the Gran Coupe over some of the very same challenging roads that were chosen by BMW to show of its hyper-confident M6 convertible, and the big 6er acquitted itself admirably under the circumstances. With four-inches worth of extra wheelbase versus the 6-Series coupe, the Gran Coupe felt larger on the road, though mostly in a good way for the mission of the car. The ride was very stable at high speeds, with excellent cushioning in any but Sport+ of the available chassis settings (there’s even a very cushy “Comfort+” available now), and very good noise suppression.
The downside to the added length was found in slowed cornering response—the Gran Coupe just a takes a bit longer to rotate—though we’d hesitate to say that there was any other real tradeoff in terms of handling dynamism. What’s more, on very large bumps, potholes, road cracks, etc., the ride occasionally morphed from ultra-smooth to a bit choppy. (We only experienced this once or twice on the smooth byways of California, but fear that northern roads would call the 640 out more often—more data is needed.)
Steering feel is a tad wooly, as is the case with the whole of the non-M 6-Series lineup, though never so disconnected as to make the driver feel ill at ease. More to the point, the lack of feeling from the tiller (and to a lesser extent, the chassis) simply put us more in the mood to cruise, rather than try and kill every corner. Considering that all of the competition in the four-door coupe set–with the notable exclusion of the hard-core CLS63 AMG–is pretty laidback, we think this driving character will work very well for the target buyer.
BMW will eventually offer the Gran Coupe in 650i and 650i xDrive varieties, but the cars on hand for us to drive was the 3.0-liter, turbocharged, inline-six car, the 640i. In the new 6, this high-output version of the well-known engine makes 315 horsepower and 330 pound-feet of torque, and is good for an estimated highway fuel economy rating of around 30 mpg (which would make it the class leader). We think that the six-cylinder motor is the most interesting, relative to its primary competition, in part for the good fuel economy, but also because the 640 feels damn fast as-is.
Even after getting out of the M6, and into the 640, we never felt that the motor was anything other than perfectly suited to this application. Power off the line is impressive; the car feels every bit as quick (and perhaps quicker) than its mid-five-second 0-60 time would indicate. Look for acceleration from higher speed–we did–and you won’t be disappointed with the results either.
The eight-speed automatic transmission is a perfect fit, too. With spacing of the first three gears suited to heady, quick-start capability, and of course a tall eighth gear to help achieve that critical “30 mpg” on the window sticker. We enjoyed shifting around via the wheel-mounted paddles–which offer very quick changes, up and dow–but generally found the shift logic to do a fine job when we left the flipper gearlever in drive.
In most every way, the nonsensical part of the Gran Coupe proposition is identical to that of its chief rivals: the sedans on which all are based are simply more practical. Of course you know that a 535i feels largely the same to drive, costs a lot less (around twenty Gs), and has a more usable rear seating area. Chances are, if you’re the type to bitch about this whole segment’s existence, you’ll love to point out the logical faults of everyone plunking down money for a four-door coupe. And yet, the cars in this class continue to sell, and for a premium because they offer most of the practicality of their sedan counterparts, but look a lot cooler in the process.
You can make up your own mind about the attractiveness of the 640i Gran Coupe, but we urge you to do so in person, rather than from a picture. With an impossibly long hood, strong shoulders, and the sloping rear roofline, we found the car to be impressively better looking in real life than we’d found it in photos.
So–fast, handles really well, and looks fairly amazing–what’s not to like? Our primary complaint with the 640 isn’t related to the car itself, but rather to the available competition, which undercuts the value presented by BMW. The Gran Coupe starts at a steep $76,000, which places it more than $4000 above the $71,300 MSRP of the Mercedes-Benz CLS550. Yeah, that’s the 402-horsepower, V-8-engined CLS we’re talking about. Audi’s A7 meanwhile, more of a direct performance match with its 310-horsepower, supercharged V-6, can be had for a starting price of $59,250. The decked out A7 Prestige only asks $65,580. Even a base Porsche Panamera V-6 (which is admittedly slower than the 640i) undercuts the Gran Coupe by a few hundred bucks.
No one expects any BMW model to be inexpensive, but it is a bit strange for the German company to be so far off the mark set by its mainline competitors. Only time will reveal if the price delta between the 640i and the CLS, certainly, will really impact the sales figures of the new Bimmer.
In the meantime, and based solely on our lovely day of driving, we’re happy to report the Gran Coupe to be a lusciously appointed way to go motoring in style. With enough performance to keep most BMW enthusiasts satisfied, and a wealth of luxury features to cosset the rest of the interested shoppers, the 640i Gran Coupe will be tempting buyers of all orientations, no matter how many doors it has.
2013 BMW 640i Gran Coupe
Engine: Turbocharged inline-6, 3.0 liters, 24v
Output: 315 hp/330 lb-ft
0-60: 5.4 sec
Weight: 4190 lb
Fuel Economy, City/Hwy: 20/30 mpg
Base Price: $76,000
On Sale: June 2012
Tags:
6-series650iBMWgran coupePorsche