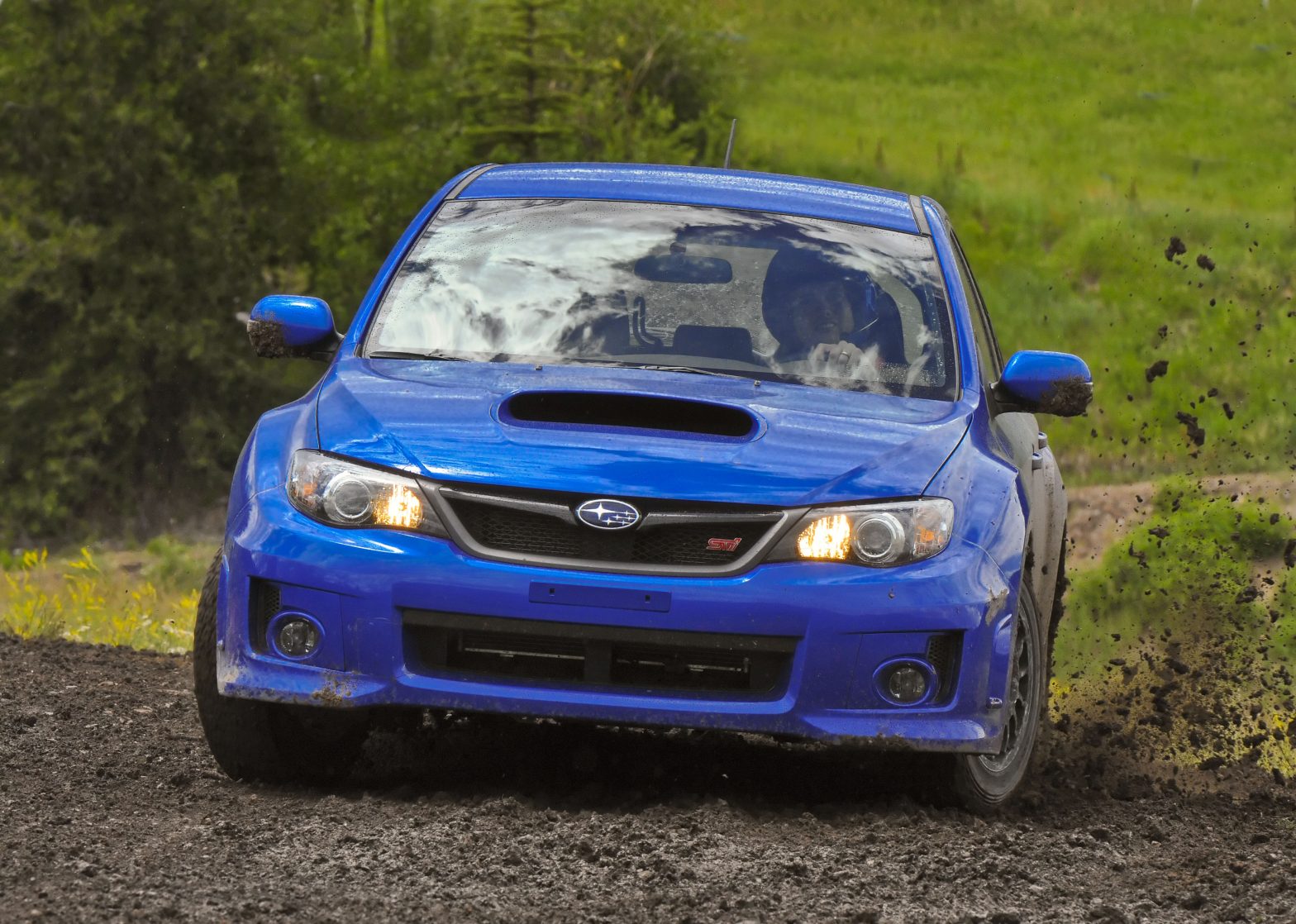 In the gorgeous heights of Aspen, Colorado, we listened as the Subaru folks dished the details on the 2011 Subaru Impreza WRX and WRX STI. Our introduction to the updated WRX and STI covered a lot of the improvements to the vehicles, both dynamic and aesthetic, many of which will not seem unfamiliar to you if you’ve been following headlines and auto show coverage. The big news, as we know, is that the WRX got wider, and in the process acquired lighter, wider, seventeen-inch wheels, adding an inch in width to each shoe. Wider fenders help keep the rubber from sticking out the sides. This also helps it achieve its more bulldogishly aggressive stance.

The STI, though, was our main focus, and it received its share of improvements for 2011, too. Its suspension has been stiffened and its ride height lowered. It suffers less body roll, and is capable of .93g on the skid pad. Aerodynamics have improved, offering an extra three miles per hour to the 2011 model’s top speed. Most notably, though, this year sees both hatchback and sedan versions of the STI, the latter with a really gruesome (we mean that in a good way) rear wing that looks as though it could have been developed by Lockheed-Martin. From what we were hearing and seeing, we were expecting a straightforward evolution of the car we already know: raw, visceral, and stupidly fast.

Both cars have grown up a bit, and besides sharing exterior looks, the interior of each has new, more mature touches. They share a new instrument cluster, with red lighting on the gauges. Both have darker interior trim, giving the cabin a more sophisticated feel. The sound system has been improved, and is USB-, auxiliary input-, and Bluetooth-capable. This new level of sophistication can also be felt in the driving dynamics. The quirkiness of models past is less apparent here, and the everyday driver will feel more at home in these performance Imprezas.

After our briefing, we drove to the track at the Aspen Sports Car Club—a 1.1-mile road course consisting of eight turns—where we met up with former rally racer John Haugland, who was on hand to give driving tips. After accompanying us for a few laps in the 2010 STI, we ventured solo in the 2011 sedan to suss out the differences, away from the prying (yet rather helpful) eyes of the professionals.

While we didn’t notice a difference in road feel coming through the suspension—the track surface was too smooth to really have much effect in that regard—we did notice a difference in handling and response. The 2011 version, even without the helpful guidance of Mr. Haugland, seemed more willing to cooperate. We felt less roll while turning, which allowed us to carry more speed through the corners. Setup for corners was a little better, too, as the brakes dragged us down to entry speed with ease. We also found the 2011 model to be especially forgiving, and our sloppier moments were easily corrected for quicker recovery of our line. The only thing we could have asked for would have been a bit more heft from the steering wheel in our hands. Impressive stuff, really, as while we didn’t notice a greater sense of feedback, there was definitely a noticeable amelioration of poise as we pushed the 2011 ever harder.

From the track, we set out through the mountain roads surrounding Aspen, and we followed a river uphill along curving roads. As we swept through the corners, we couldn’t help but wonder at the smoothness of the suspension. It was communicative enough, but it was really comfortable, quiet, and in no way harsh—a surprising notion from such a capable setup. Through some witchcraft (internally called “pillow ball bushings”), Subaru has really developed a suspension that doesn’t compromise ride quality for performance. And while we at Winding Road are even fond of the Mitsubishi Evo’s chatty suspension, we doubt new STI buyers will feel they’re missing out on any excitement when dashing comfortable across their own favorite back roads. Subaru loyalists will find it to be a more civilized (yet more capable) version of what they’re used to, for better or worse. Probably better.

Later, our route took us to the Buttermilk ski area (which half-explained the too-delicious-to-be-true “Buttermilk Powder Pandas” road signs we had been seeing along the highway), now serving as a short rally setup. While strewn with gravel, the course had been turned quite muddy after being sprayed down for dust and driven on throughout the day. As we arrived, a light rain added to the soup. Good times were sure to follow.

For this segment, the STI hatchback we were to drive was basically stock, besides tall rubber running on fifteen inch wheels, last-generation brakes to fit said wheels, and a harness setup to keep driver and passenger safe. The car was the same probably-too-low-for-this-type-of-thing stance as the one we had been driving around Aspen, and seeing the drivers ahead of us climb the bumpy hill had us expecting a rough ride.

We were mistaken. Yes, it was bumpy, but overly rough it was not. As we accelerated up the hill, the turbo spooled up, and as the tach needle swept past three grand, the STI slung us up the muddy slope. The bumps that seemed so harsh from our viewpoint outside the vehicle were absorbed quite well by the suspension, and the helmets we wore surely helped with the sound. Sweeping around the curve at the top of the hill, aiming for a late apex left us gliding into a downhill slalom. It was here that the STI felt the most natural, as the application of power helped build momentum in the direction we held the wheel, often a different direction than the grille faced. Even in the sloppy stuff, with just a little bit of forethought and a healthy dose of the right pedal, what looked like an impossible course to take at speed, the vehicle carved confidently. Here, the mild lightness in the steering felt far more natural than it did on the track.

Once our pulse returned to normal, we took the opportunity to drive the 2011 WRX up the narrow, winding road to the continental divide at Independence pass, at an altitude of over 12,000 feet above sea level. As with the STI, the WRX’s engine was very peaky, with a rush of boost propelling it up the mountainside once reaching about 3500 rpm; it seems the thin air was no match for the Subaru’s forced induction. At any elevation, the power delivery is pretty much as we remember it—slow at first, bound by turbo lag, then supremely rocket-like, then progressive up to the redline. In the more powerful STI, it all comes on in the same manner, only ratcheted up a few notches. We were really happy to play around in this already-familiar power curve.

It was a bit different in feel from the STI. The clutch was smoother, and shifts came easier (the STI’s third pedal asked for more precision and more leg muscle). The five-speed manual was good to use, even though we were using it less often than with the STI; we enjoyed exploring the tall gearing, and second gear, as with previous generations, gave a quirky whine and responded quickly to the accelerator. Though more so than before, the WRX still didn’t feel quite as refined as the STI, and a little bit of lash was palpable when getting into the throttle. Also, the suspension was looser, allowing for a lot more fore-and-aft bounce than in its hi-po sibling. The trek up and down the mountain was easily dispatched, despite the numerous cyclists, narrow lanes, and dinged-up guardrails just a bit too close to the road.

Later, at dinner, we had the chance to catch up with John Haugland again. When asked by Bengt Halvorson of High Gear Media (who was our exceedingly tall, yet good-humored driving partner for the day), what car he uses for a daily driver, the Norwegian rallyist told us he drives an Impreza diesel. This instilled in your author the kind of envy that only forbidden fruit can provide, and I savored the emotion, along with the thought of such a torque-laden Subaru and its potential for fun. While we will, of course, keep our fingers crossed that a similar setup will one day reach our shores, we’re pretty content with what’s in store for us in the upcoming year, as we undoubtedly have only begun to discover all the depths of the 2011 WRX and STI.