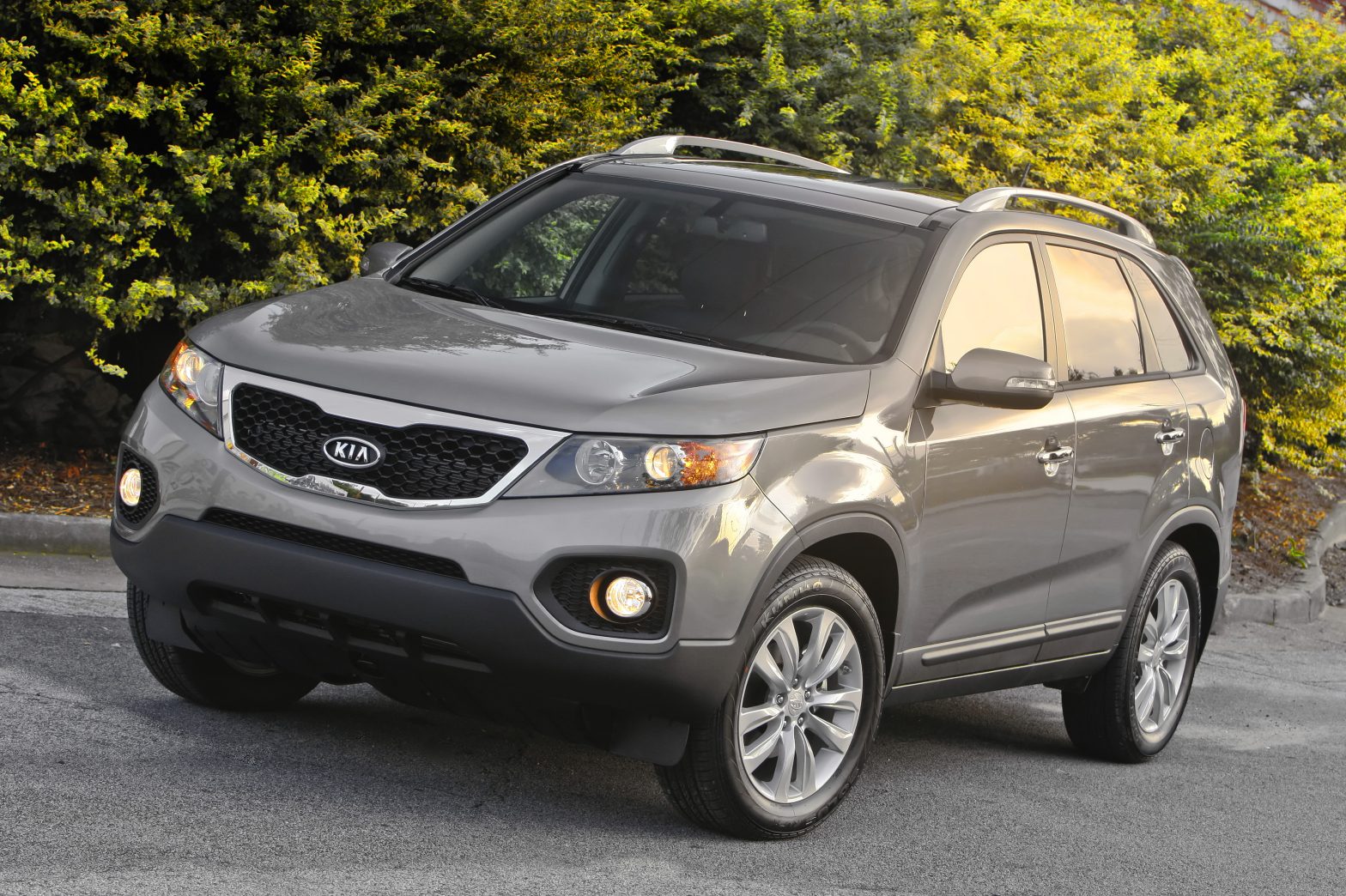 To say that Kia has made a lot of changes to the Sorento for the 2011 model year doesn’t quite capture the spirit of it. It’s roomier, lighter, more efficient, offers different powertrain options, and is built in the U.S. to boot. While it is by all means a crossover, Kia has tried to keep the new Sorento from falling in with the rest of the herd, and has created what promises to be a formidable competitor in the otherwise dreary and uninspired segment of affordable CUVs.

The 2011 Sorento, unlike the previous all-V-6 lineup, offers a four-cylinder engine. The 2.4-liter inline-four has two obvious advantages over the larger six-mills—price and fuel economy. While Kia has not yet released pricing for the 2011 Sorento, the base four-cylinder version should start under $20K. With front-wheel drive, it will get an estimated 21 miles per gallon in the city, and 28 on the highway, with the all-wheel-drive version suffering only one lost mpg in the city. That being said, its 172 horsepower is merely adequate for the front-drive Sorento. While it feels peppier than the overworked four-cylinder Chevrolet Equinox, it still sounds labored at cruising speed.

The 3.5-liter V-6 engine seems like a much better fit for the Sorento. It provides more than enough power to get it moving at a rapid clip, and with 273 horsepower, we always felt like we had plenty of power in reserve for passing maneuvers. The ride was quieter than in the four-cylinder, too, as the V-6 struggled a lot less to keep the vehicle in motion. Here’s the real kicker: it only suffers a loss of about one mpg over the smaller engine option.

For the quicker starts and more comfortable cruising, we would definitely pony up for the superior V-6 model. In the front-drive version, throttle response was sharp in the way you wouldn’t expect from a typical “value” CUV. While the all-wheel-drive model didn’t come to life with the same vim as the front-drive model, it certainly didn’t feel lazy. The application of power felt smoother, if less urgent, when directed to all four wheels. The front-drive Sorento is definitely more fun on dry pavement, but we could imagine settling on the all-wheel drive for year-round utility.

Getting behind the wheel of the 2011 Sorento, we admit to being a bit skeptical at first. That is not to say we haven’t been impressed by the automaker as of late. We just tend to notice that crossovers don’t usually offer much in terms of a good driving experience. More often than not, they feel bulky, numb, clumsy, and limited in how they respond to driver input.

This is not necessarily the case with the new Sorento. Like we said, the V-6 offers up a healthy shot of juice right off the bat. To our delight, we were also getting some feedback from the steering wheel, which vibrated just enough to give us a confidence-inspiring feel of the road passing underneath us. The sidewalls also conveyed this information, the smaller road irregularities transmitting through the suspension while the larger bumps were softened out of the equation. The result was a ride that didn’t feel robotic—one that inspired more confidence than a dull, doughy ride. And with a steering feel and response that falls somewhere close to the middle of the spectrum, the Sorento straddled the line between comfort and control. Not too shabby for a people-moving CUV.

The interior space, depending on the options, was quite varied. Big plastic panels surrounded our view, broken up by pieces of high-gloss wood trim (though a less glaring matte trim is available) in all versions we saw. The combination of cloth and what appeared to be vinyl on the seats seemed awkward. Moving up into the perforated leather was a small improvement, while the two-tone leather options offered the most perceived quality. If you’re at all picky about a vehicle’s interior, we recommend spending the extra bucks for something you can stand to live with.

The Sorento is available in five- or seven-passenger configurations. In the seven-passenger model, cargo space is severely limited with the seats up, and the third row should be reserved only for children. Headroom is in short supply, but the second-row seat backs can be adjusted to make room for knees. To be honest, the wise thing would be to opt for the five-seater over the barely-usable third row. Instead, spend the money on material and sound upgrades (an Infinity 7.1 surround system is available), or on the panoramic sunroof, for the comfort of five passengers.

Compared to the rest of the class, the new Sorento promises value and drivability. It sort of falls within a sweet spot for the crossover segment, as it will continue to appeal to Kia’s younger, more practical market without totally giving up a sense of driver involvement. Previous Sorento owners who are happy with the product will find the 2011 model to be an exciting improvement. It’s expected competitive pricing and image may win over buyers who are concerned about giving up identity and entertainment for utility and value. The 2011 Sorento, though still a crossover, allows people who still have a sense of adventure to get what they need without giving up too much of what they want.