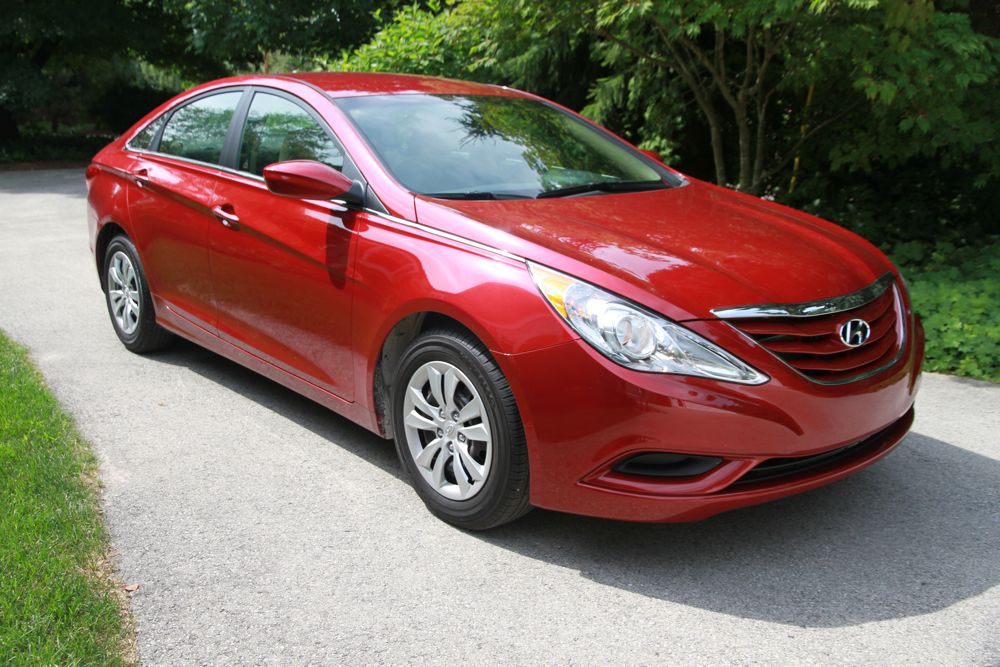 It’s no secret to those who have been paying attention that Hyundai is on something of a roll, as exemplified by the flagship Genesis sedan and coupe, but also continuing down to some of the more mundane sedans and SUVs in the line. So, we suppose we shouldn’t have been surprised that a short while after Hyundai handed us the keys to a base Sonata we were thinking “this is pretty nice”. The surprise continued through our week with the car, with the growing recognition that this is an all-around win, not just a good effort that falls short but is well priced to compensate the buyer for his trouble.

In the world of automotive journalism it is quite rare to get a tester that is a base car, the standard practice being to take the top trim level, add all the options, and hope to impress. This leads to $120,000 BMW 7-Series and $50,000 Audi A4s and the like. The features are interesting, we suppose, but we can’t help but wonder if the base car might be just as satisfying for tens of thousands less. Problem is, wondering is all we can do because bundled in with all those options are some performance items (adjustable suspension or torque vectoring or a different transmission) that only leave questions about how the base car drives.

In any event, the Sonata we got from the clever-as-a-fox Hyundai folks was the base car. The GLS is the most basic of three trim levels and our car had the manual transmission (naturally a six-speed automatic is available, for $1000). The only option on the window sticker was carpeted floor mats ($100). That means the MSRP of the Sonata here came in at $19,295.

At that price, we didn’t particularly notice items that are missing. The GLS includes conventional power goodies (a/c, power windows, front and side airbags, TPMS) as well as XM radio, Bluetooth, split folding rear seatbacks, lane change assist, iPod integration, and ten-year powertrain warranty – items that will cost you dearly if you shop at the premises of a European brand. About the only mainstream items that are obviously missing from the GLS are leather, navigation and a sunroof (all available on the SE or Limited trims).

A relevant comparison is with the Honda Accord LX, a solid and well-established player in this category. The Sonata is about $2000 less upfront, and offers a few more features as standard (XM, Bluetooth, warranty length). The Sonata also has about 10-percent more horsepower and torque, along with about 10-percent better EPA fuel economy, thanks to lighter weight and a direct-injected four-cylinder engine.

Still, our impression was really dominated by what happened when we got behind the wheel of the Sonata. To put it simply, the GLS delivers a really good all-around drive. The suspension is moderately firm, with good roll control so cornering is flat and pretty nicely balanced. Because the Sonata is rather light (a good thing) at 3161 pounds, we didn’t get the feeling that the car was fighting us in the turns. The steering offers up some feedback and most important has good on center response along with reasonable quickness.

Ride quality is good if not great. Our tests were conducted in suburban Chicago, about as pothole-laden and frost-heave blighted a place as you’ll ever go (we hope). The firmness that served us well as we scared grandmothers and farm hands during our cornering tests leads to the transmission of bumps into the cabin. The Sonata’s structure is stiff however, and the damping is well-judged, so the ride is never harsh or unpleasant. Still, those looking to float above the flotsam and jetsam of our modern (read: decrepit) road infrastructure may want to look elsewhere.

We also enjoyed this engine/transmission combination. The 198 horsepower four isn’t going to fling one’s toupee into the back seat, but the Sonata moves along well and never feels sluggish. This engine, like many fours, won’t win awards for sound, and the limited torque means some attention to clutch release is needed to be smooth. But over the week these quibbles faded and we were smitten by the ability to lay down the power precisely when coming out of corners or when passing. As good as automatics have become, there is nothing like the direct connection of engine to tire offered in a manually shifted car. We also were impressed when we saw 31 mpg in the suburbs and 37 mpg on the highway (EPA says 24/35), though you have to allow for the fact that Chicago is very flat and that we weren’t in stop and go traffic.

Frankly, we were also impressed by the packaging on offer here. The exterior and interior design has a bit of flair that seems an antidote to the institutional blandness that the major brands impose on buyers. Not only that, but Hyundai’s material quality seems a step above what the Honda and Toyota designers have in the parts bin, and the Sonata tastefully avoids Detroit’s obsession with cheapo chrome trim. Add to those aesthetic observations the fact that the rear seating is quite roomy (more 5-Series than 3-Series) and you have one well-executed all-around package.

We came away from our week in the Sonata with the strong feeling that the real competitor for this car is the VW CC. The CC is another strong all-around product. It costs quite a bit more, though for that extra cash you get more of everything the Sonata does well, along with a better brand and a sense of solidity that the Hyundai can’t quite pull off. But when you have to go from $19k to $29k to find a worthy competitor, well, that kind of makes the point, doesn’t it?