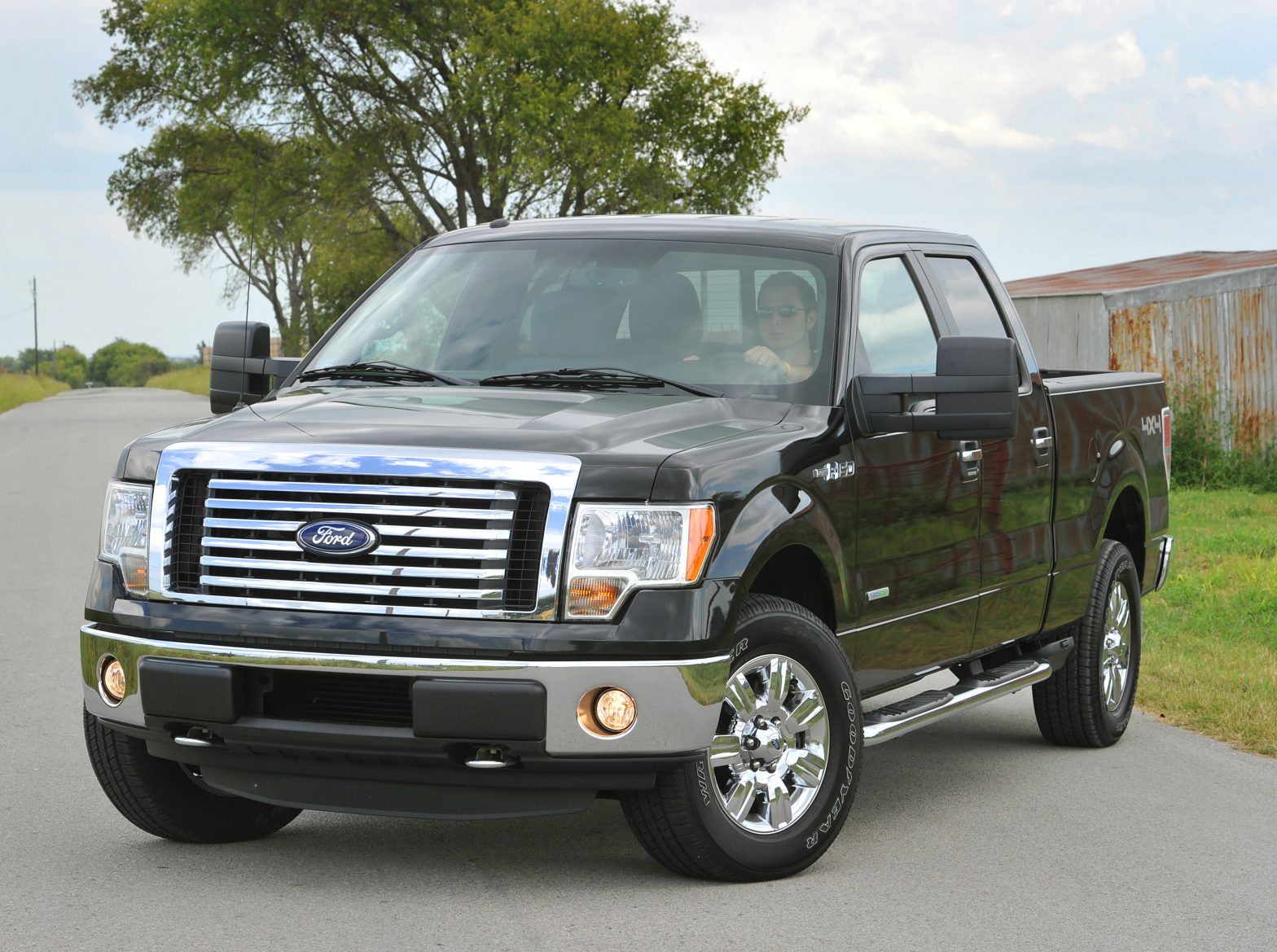 2011 marks the largest change of powetrains in the F-150’s 62-year history, so Ford decided to invite us to its sprawling Michigan Proving Grounds to try out the new motors. To make things a bit more interesting for us journos, Ford provided Chevrolet Silverados and Dodge Rams for back-to-back driving impressions.

While the new F-150 features a 5.0-liter, Mustang-derived V-8, the 6.2-liter V-8 from the SVT Raptor and Super Duty, and the 3.7-liter V-6 from the Mustang and Edge, the motor Ford is most proud of is its 3.5-liter EcoBoost. The blown V-6 produces 365 horsepower and 420 pound-feet of torque. This is the motor that we would spend the most time with, partaking in towing exercises, drag races, and an economy drive.

After a brief presentation, we were handed the keys to an EcoBoosted F-150 Lariat and tasked with hauling a 6500-pound trailer along a hilly road course. As we set off, our first shock came from the sheer power of the biturbocharged motor. Mash the gas from a standstill and the truck, despite the 6500 pounds attached to its backend, leapt forward with a surprising authority. Power was abundant, and had it not been for the sixteen-foot trailer bouncing around in our rear view, we would have never guessed we were hauling so much weight. We have absolutely no doubt that this truck could handle every pound of its 11,300-pound tow rating.

Much of the credit for the F-150’s excellent towing character goes to its six-speed automatic transmission. Upshifts and downshifts were quick and well executed, while still being smooth. The addition of Progressive Range Select allowed us to lock-in certain gears. On uphill sections, we could keep the motor right where we wanted it, preventing the truck from upshifting and possibly losing traction. While going downhill, we could switch to manual mode, and use the engine to slow down, easing the burden on the brakes

We repeated the hauling test behind the wheel of a Chevy Silverado equipped with a 5.3-liter V-8 and a Hemi-powered Dodge Ram. Despite the larger displacement and two extra cylinders, the Silverado couldn’t match up to the F-150. Off the line, the Chevy couldn’t replicate the F-150’s eager launch. Where you could really feel the Ford leaping forward, the Chevy wasn’t quite so energetic. The Silverado was down 82 pound-feet of torque, and it showed. Once we arrived at the hilly sections, the Silverado seemed downright unhappy, struggling to match the F-150’s speeds. The Chevy also required a much firmer right foot—where the F-150 simply needed a tap of the shoulder to accelerate, the Chevy needed a full on shove in the shoulder blades to get going.

While the performance of all three trucks was enlightening, we were even more surprised by the noise, vibration, and harshness control of each vehicle. While the smooth roads of the test track gave us a scale that was slightly skewed, we were able to discern that Ford has done a great job of NVH control. Just a hint of turbodiesel-like hiss made it into the cabin to let you know the engine was working. What was really surprising was how well the F-150 masked the trailer we were towing. We saw it bouncing and swaying behind us, but didn’t feel much of anything in the cabin.

The same couldn’t really be said for the Dodge, nor for the Chevy. The trailer exerted its will on the Dodge, and made it clear that we had 6500 pounds bouncing around behind us. Through the body and the steering wheel, the trailer caused us to make constant corrections, which was pretty disconcerting on a twisting, hilly road. The Dodge did feel pretty nice in regards to road noise though, and even at the higher reaches, it kept the engine vibration under control.
The Chevy, though, was a bit of a handful. As the oldest truck out there, we didn’t expect too much, which is good, because it didn’t deliver too much. As with the Ram, the Chevy was subject to the whims of the trailer, while the overworked motor shook about under the hood, transmitting its movements into the cabin. The Silverado’s package just didn’t feel as tightly wrapped as the other two trucks.

Our next stop was at an eighth-of-a-mile drag strip. Although hardly indicative of overall performance, Ford is well aware that auto journalists are, for the most part, children who are easily amused by simply mashing the throttle. Here’s a quick roundup of our overall times:

These times aren’t great representations of overall performance, but they give us an interesting scale to work from. We can report, that the 5.0-liter V-8 and 5.7-liter Hemi felt as neck-and-neck as the times that were posted. The 6.2-liter V-8 was a bit of a disappointment though, as it just didn’t have the urgency of the smaller V-8s. The big surprise, once again, was the EcoBoost—without a load to haul, it absolutely sprints. Unfortunately, Murphy’s Law was in effect, and a trap speed wasn’t printed with our time. Our gut feeling is that the EcoBoost was between 67.3 and 68 miles per hour. The fact that this motor kept so close to three very good V-8s is a shocker.

The bonus part of the drag races was hearing each vehicles unique soundtrack from inside and outside at wide-open throttle. The EcoBoost delivered a sweet, BMW-like howl, which upon first earful caused us to whip our heads around, not believing the sound could be from a truck. As expected, the 5.0-liter V-8 sounded great, especially at the higher reaches of the rev range. Unlike the 5.0, the 6.2 sounded like a truck, with a deeper rumble to it. The Chevy’s 5.3-liter was a disappointment, as it just didn’t sound as smooth or as muscular as the other V-8s that were available.

None of the trucks, however, could match the beautiful V-8 sound coming from the tailpipe of the Ram. This deep, muscular note sounded more like an old-school muscle car than a truck, which we are very okay with. It had a bass about it that we really enjoyed. Ford might have some great motors, but The Blue Oval could take some lessons from Chrysler about exhaust notes.

Our economy challenge was around another (different) hilly test track. The premise was simple, take an EcoBoosted F-150 and be as efficient as possible. We switched the fuel-sapping air conditioning off, rolled up the windows, and eased our way onto the track. While we expected the biturbocharged V-6 to perform well, we certainly didn’t expect it to return almost 27 miles per gallon, which it did.

We drove all of these vehicles in ideal conditions—no traffic, glass-smooth roads, and with very little to focus on anything other than the driving experience. Although we have little doubt that the F-150 (especially the EcoBoost model) will be successful, we will be reserving final judgment until we get some real-world seat time, which should be coming in the next few months. Check back soon.