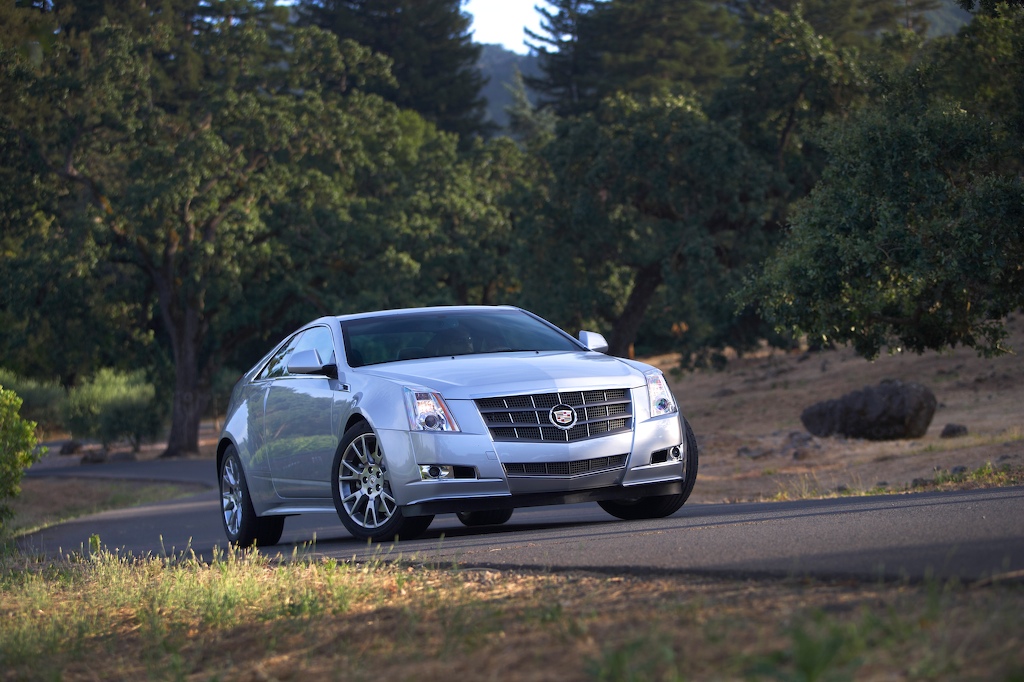 The Cadillac CTS line has been exceeding both customer and critical expectation since it first arrived on the scene for the 2003 model year. Reenergizing the rear wheel-drive DNA for the Cadillac brand, we’ve always found the CTS to be completely competent, if not always as decidedly inspired as its (mostly European) competition.

Part of the CTS advantage has always centered on the car’s hard-edged, yet fetching styling. Though the original sedan looks rather plain when compared with today’s CTS grouping, at the time it was rightly seen as an iconic shift for the General Motor’s dusty luxury brand. The second-generation CTS has been followed with the quite lovely and functional Sport Wagon, lent its vibe to the redesigned SRX crossover, and now appears in its most beautiful iteration with this stunning CTS Coupe.

We, along with many of you, have been hot to get behind the wheel of Cadillac’s two-door since the first moment we saw it at the 2008 North American International Auto Show in Detroit. Despite, perhaps, a certain reticence to believe that the Caddy coupe could transcend its softer stablemates and prove itself as a true enthusiast vehicle, the shape of the thing inevitably triggered feelings of unconditional lust. We wanted the CTS Coupe to be not only good, but damned good.

Suffice it to say that, heading for some of California’s most picturesque and palpitating roads around the Napa region, expectations were high.

We won’t belabor the description of the Coupe’s sexy shape much more; you can largely make up your mind for yourself based on the photographs, which do the car justice. But it is worthwhile to talk a little bit about how the car’s outward form influences the driving experience. One of the first things you’ll notice, from the inside and out, is the aggressively raked front windscreen, as well as the rather low glasshouse all the way around. Having driven similarly snug cars—GM’s own Camaro being a particularly notorious example—we were half afraid that overall visibility would be poor. Thankfully, that’s not really the case. The view forward is relatively good, with the Coupe’s high hood and front corners well marked for placing the large car on the road, and in a corner. The hard-sloping A-pillars interrupted our lateral front view a bit, but not so much that we ever felt particularly blind. Rear three-quarters visibility is more obscured—not a problem on the hilly roads around Napa, but less than ideal for swapping lanes during normal highway driving.

On the plus side (and the plus size), your 6’ 5” test driver didn’t lack for room in the head- or legroom departments. We’d happily take an inch or so more width where our knees inevitably fall against the center console, but we’d never describe the cockpit as feeling “cramped,” even for our XL size. What’s more, if coupes you happen to be cross-shopping include the likes of the BMW 335i or the Infiniti G37—cars that Cadillac see as being direct competitors—you’ll be happy with the larger accommodations for rear passengers in the admittedly larger CTS Coupe. We wouldn’t feel horrible about asking a couple of our adult-sized friends to ride in the backseats, at least not for shorter jaunts.

The controls and interior materials of the Coupe were more of a more of a mixed bag. No one who’s driven and likes any of the other CTS vehicles will be surprised by the cabin styling or layout, and no one who’s driven an Audi or BMW will be bowled over by the materials quality. We liked the seats for long-range comfort and soft leather, but the dash/console finishing still feels a little middle-of-the-road in this segment. The large, partially wood-rimmed steering wheel might be Cadillac-default stuff at this point, but it doesn’t add an iota of joy to the driving experience.

Which isn’t to say that the steering is vague or unsettling in some way—it’s not. We found it remarkably easy to balance the bulk of the CTS through the wheel, thanks largely to the directness of the steering rack. We wish that the engineers had gone a little lighter on the boosting of the power steering though, as the weight felt slightly unnatural.

In fact, there was a touch of “unnaturalness” to the drive character that we found during most of our test of the coupe, though much of that feeling was down to the kinds of roads that we were driving on—narrow, curving, hilly lanes that are simply very demanding to drive over at higher speeds. Carving roads, not cruising roads, if you will.

In that “carving” capacity, the CTS was good, but far from inspiring. With a wider-than-the-sedan stance and wide rubber on the road, there certainly didn’t seem to be grip issues, it’s true. But the car was too long and too heavy to rotate really quickly around a point, which is a quality that is utterly essential for technical driving like this. Don’t mistake us; we were certainly able to whip the Coupe around tight corners, and achieve slightly scary pace while careening down out of the hills and into the valley, we just weren’t having as much fun doing it as we had hoped. More like hanging on to the car than learning with it and letting it challenge us.

On the occasions when the road started to open up, breaking into long stretches of high-speed, gently curving stuff, the Caddy started to really come into its own. We were pleasantly surprised at how potent the 3.6-liter V-6 felt in this application, especially in the mid-range, and definitely when modulated by way of the steering wheel’s shift buttons. The six-speed automatic transmission felt really well matched to the powertrain, and responded quickly to the downshifts we asked for to make quick passing maneuvers, or gear down for a turn. Set to sport mode and left to shift for itself, the transmission tuning was found to be way more aggressive than we’d expected, often skipping down multiple gears when we started driving really hard. The first time we made the revs shoot up like this, we were rewarded with a sonic punch from the V-6 motor that was harder and throatier than we’d thought possible from an non-V Cadillac, too. This is the same motor found in the V-6 Chevrolet Camaro, and yet the Cadillac feels faster and sounds better—go figure.

Transitioning from long sweeping corners in to straights, we finally started to get a real sense of flow from the rigid, but softly sprung CTS. The Coupe might feel out of sorts on technical roads, but it is a beautifully judged GT car, for sure.

And that’s kind of the point. Looked at as some kind of luxury sports car, the CTS Coupe will always feel too heavy, or underpowered, or too soft. (The CTS-V Coupe is due out very soon too, don’t forget, and will almost certainly remedy all of those flaws.) When judged against its natural Grand Touring competition, and bearing in mind its remarkable starting price of under $40K, this newest CTS becomes compellingly good.