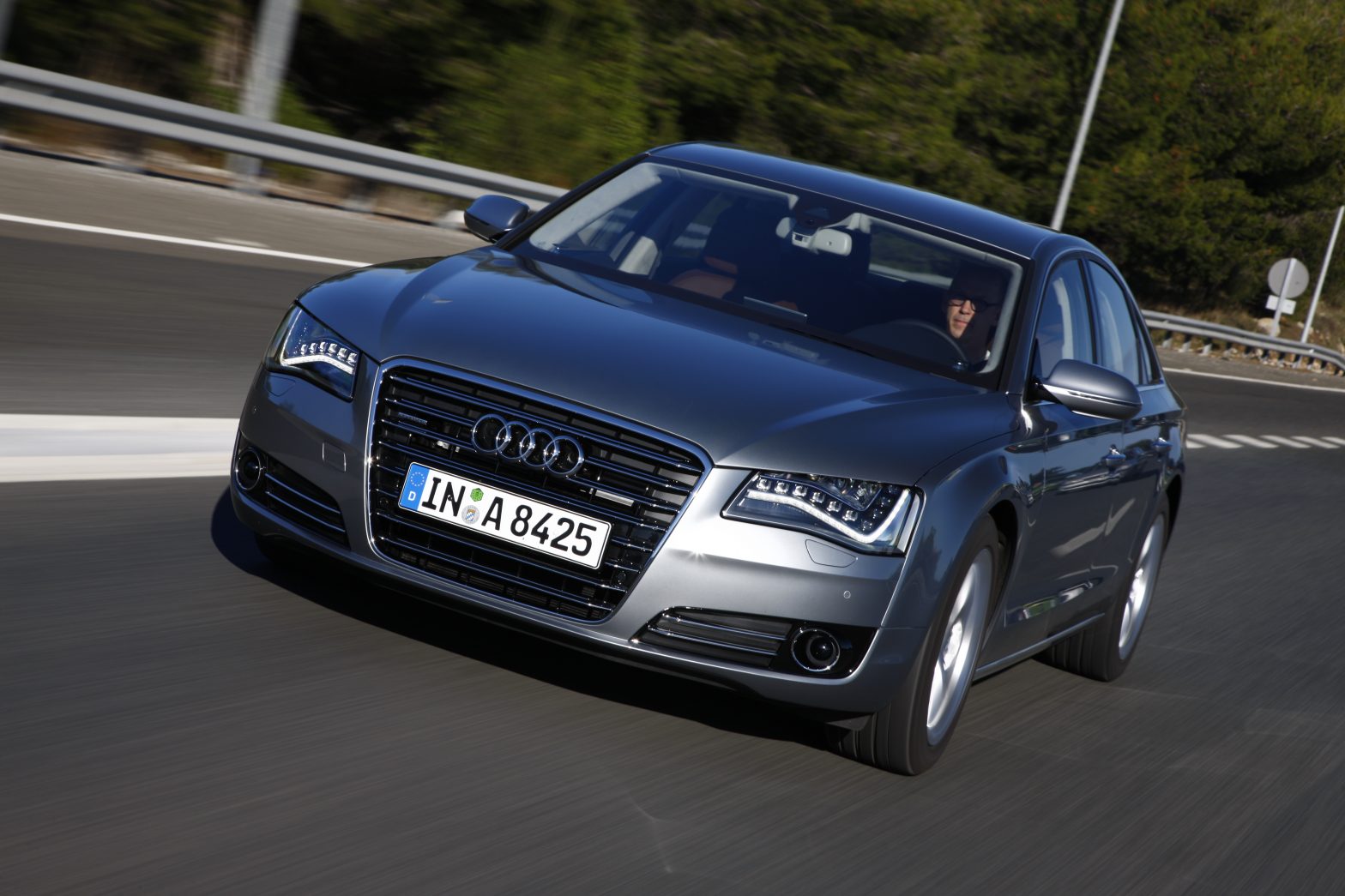 —Malaga, Spain
What is it that has kept the Audi A8 for North America in the deep, dark shadows cast by the BMW 7-Series and Mercedes S-Cass? The recently discontinued “D3” A8 in 2004, in its best year in the U.S., sold a pretty respectable 5,943 units. Well, 2009 was very hard on this luxury segment, and total D3 sales amounted to just 1,463 in the United States.
Whoa. That’s almost like selling zero cars, since your prospective clients will almost never see a new one on the road anywhere to help urge them to maybe aspire to go buy one.
Does Audi suffer hard in the U.S. because we see the cars too much as upgraded VWs, perhaps? There does seem to be a glass ceiling for the brand here, since the A4 sells briskly, while anything with a bigger number sells poorly versus even its rival Germans.
So, the battle is on. This new A8 needs to sell 4,500 units per year in our country to put a smile back on the faces of company management in Ingolstadt. Can she hack it?
From our drive just now we’d have to say a great big, “Yes.” But does the styling grab? Does it suffer a bit from the fact that the hot new A4 came out first, and now the A8 looks like a big A4 starting at $75,500? (i.e. Audi U.S. confirms that pricing will not go up on this much improved A8 4.2 FSI.) Are the wild LED headlights a little too out of sync with the conservative exterior as a whole?
We really like the car from all sides of the argument. As said, the thing is a real driver; it’s easily the lightest in this full-sized class at 4,045 pounds for the standard wheelbase version, thanks to Audi’s expert work with aluminum. (Actually, the A8 is in a dead heat with the new, aluminum-laden, rear-drive-only Jaguar XJ’s declared weight.)
Our A8 testers for the last two days have been equipped with the optional nineteen-inch wheelset—eighteen-inch is standard in North America—and a greatly improved standard air suspension re-engineered in-house to replace the less adaptive old version. Audi Drive Select monitors this suspension, plus throttle, shifts from the new eight-speed automatic, and steering input via playing with the new onboard MMI interface. All four aspects can be dialed in to your liking, too, using the Individual setting of ADS. A feature we proceeded to use, on and off, the entire time we had the cars.
Then, of course, besides the great new eight-speed transmission, we revel in the 40:60 torque-split version of Quattro all-wheel drive. The front-to-rear ratio can extend to as much as 20:80, making it pleasantly sporty when we like, and when there’s the optional ($1,100 as offered on the S4 and S5) sport rear differential rapidly monitoring spin between the two rear wheels, we feel very little understeer, and oversteer is very controllable with ESP fully off.
This new A8 is a success machine, but so are the BMW 750i xDrive, Mercedes S550 4Matic, Porsche Panamera 4S, Lexus LS460 AWD, etc. And the A8 is a tick slower off the line still versus a few others in this group at 5.6 seconds quoted to 60 mph. That pace from a 4.2-liter V-8 making 366-horsepower and 328 pound-feet of torque, thanks to lower frictional losses throughout the engine.
The major show piece, besides the extravagant new LED headlights that we grew used to quickly, is the look-at-me new MMI onboard information center that takes a very BMW iDrive-looking interface, reworks all the software in-house, and comes at us with a solution that certainly works well, feature-for-feature. Still, in our humble, first-contact opinion, it might just have too many features for its own good. It is an intuitive unit nonetheless.
Ours arrive in November of this year. What Audi wants for our continent is to keep the A8 at about 5 percent of total North American sales and rein in A4 sales to roughly 40 percent of the total. What is lost from fully optioned A4 types of sales should go to the A7 Sportback in 2011, and then the all-new A6 in 2012. Whatever, Audis are fine rides, and now the business side of the company needs to get its muck together and learn how to sell the way the brand sells in Germany and China. There’s no reason why it shouldn’t be able to pull it off with flagships like this D4 A8.
2011 Audi A8 4.2 FSI
Engine                             V-8, 4.2 liters, 32v
Output                             372 hp/328 lb-ft
0-60 MPH                        5.6 sec
Top Speed                      155 mph*
Weight                             4045 lb
Base Price                       $75,500
*electronically limited
Tags:
A4AudiMercedes-Benz