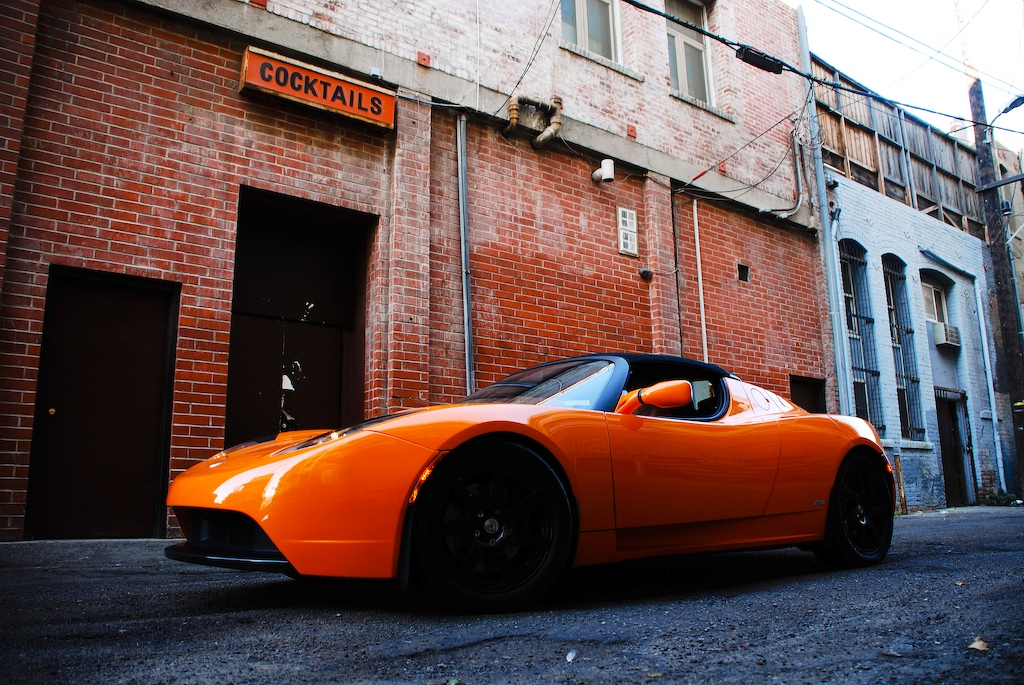 How many Elons do you have on your Rolodex or Blackberry, hmm? Elon Musk, chairman, product architect, and CEO of Tesla Motors is the only Elon we know. His name just gets cooler and rarer by adding the Musk.

He’s also as elusively super-wise as we would like to be in our dreams. Once what is known of the man is dug into, it becomes apparent that the whole endeavor of Tesla Motors and its ingenious electric-propulsion cars is just one of many high-level deals he pursues. Absolutely nothing happens half-baked on his curriculum vitae, so know that much right off the bat. Buying into the Tesla vision, you will not have any post-purchase regret over the company you’re dealing with.

And now Musk and his mates have a faster roadster for us, called Sport. A day spent driving the 2010 Tesla Roadster Sport is one never-ending hole shot through traffic. The motor in the Sport model is essentially the same as that in the base model, only that the stator coils that interact with the 14,000-rpm rotor are hand-wound more tightly, thereby resulting in greater torque produced through less resistance, plus greater kilowatt hours per amp, while using just a smidge more energy from the battery for the quicker go-pedal reactions. All of this in addition to the necessary reprogrammed “firmware” of the now smaller Power Electronics Module, or PEM, the brains of the operation. The total distance promised from a complete charge in the efficient Range mode drops from 244 miles in the 2010 base Tesla to 235 miles in the Sport model.

Whereas we can debate all day whether or not things like the Toyota Prius or VW Golf TDI are really green enough or not, there is no doubting that the Tesla is extreme green by its very nature. In a full electric, we never even weigh the green issue, thereby liberating ourselves instead to just play with the new Tesla. It makes us feel exhilarated more than planet-saving, which is just as it should be.

We could have zipped along in our “very orange” painted Sport through the zombies of Los Angeles County traffic all day, really. It’s those stealthy silent hole shots that we get better and better at as we trust the thrust, handling, and off-throttle braking that get so addictive in this package. The 295 pound-feet of torque now good up to 7100 rpm from the single motor (the base Roadster holds its 280 up to 5500 rpm) extends the duration of the throttle spurts.

The single-speed 8.27:1 transaxle on all Tesla cars now has a much cooler push-button interface that thinks almost as fast as our fingers can press the P, R, N, and D buttons. While this one ratio may lack the initial explosiveness, it’s a durable choice and makes the Tesla Sport a more civilized launcher. Get rolling to about 10 mph and the explosiveness kicks in. Acceleration to 60 mph with the 288-horsepower Sport takes only 3.7 seconds according to press materials, 3.5 seconds according to our guessing ability. Top speed remains limited to 125 mph since battery juice is sapped hard at the most illegal speeds anyway.

Filling up the lithium-ion stack at your back still takes just 3.5 hours with a beefed-up household 240-volt connection. The opening at the left rear pillar flashes through white light to blue as the charging system snaps in to action, then a flashing yellow for the duration of the charge cycle, and finally green when you’re topped off.

There are a lot of key touches to the 2010 Tesla Roadster – called “Darkstar 2.0” internally – that improve the driver experience and the Sport trim adds goodness of its own. The reason for many Sport upgrades is the inherent toy-car roughness of the Lotus Elise chassis, a thing we love when we’re toying around, but which we start to whine about during a typical 60-mile drive.

We now have four nitro-charged manually adjustable shocks that are central to the Sport package. There are ten possibilities from rock hard to only a little hard, and our tester was set all day on 5. It is a big and appreciated difference, but any time we ventured over expansion strips that had risen up between seasons, we were yanked back to Lotus Elise reality. This is a fine chassis on a smooth road, but over typical North American super slab it’s not so nice day after day. This will be a Tesla compromise until the four-door Model S arrives for the 2012 model year.

Beyond the dampers, there is now a bunch more noise insulation sprayed inside the carbon fiber composite body panels. The effect of rendering the Roadster a more mature feeling sports car is duly noted right away as many tinny sounds that formerly governed the very Elise-like experience are now no more. It feels good and more substantial, and is more Tesla.

One other bit that Tesla has to address in the not too distant future is the vintage thick steering feel of the unassisted rack. There are many electro-hydraulic and mechanical ways of assisting this action without going numb and this expensive eco-roadster deserves it. The muscle-bound challenge of parallel parking is made all the more tough given the small diameter of the steering wheel. Of course, the trade-off is that at both cruising and higher speeds the marked on-centeredness is quite pleasurable.

Steering is aided a bit on this Sport, however, as a consequence of the lighter black forged seven-spoke wheels – 16 x 6 inches front, 17 x 7.5 inches rear. Standard tires are Yokohama Advan UHP measuring 195/50 R16 in front and 225/45 R17 rear, just as on the Lotus Exige S260 Sport that stole our hearts. For stopping, given the regenerative deceleration’s effectiveness, we typically touch the brake pedal only for the final one hundred or so feet before full halt, so the AP Racing/Brembo calipers are more than up to the task.

For help in striking the performance pose all the more quickly, the traction control button that we used to have to hold down for five seconds to explore our oversteer chances is now instantaneous, and we can switch the motor to Performance mode from Range mode on the fly just by turning the key forward once instead of having to pull over and stop. Moving the small but very useful onboard computer screen from the Porsche key position left of the steering wheel to the low center dash also improves Tesla life.

In the end, the 2010 Tesla Roadster Sport is just as grip-point-and-go as the standard Roadster, simply doing it all faster, more quietly, and with more choices on comfort. Is it worth the $116,500 to $121,500 it costs depending on your state’s green incentives? Dunno, but we can say we enjoyed the hell out of it.

Silicon Valley building cars isn’t such a soulless idea after all.