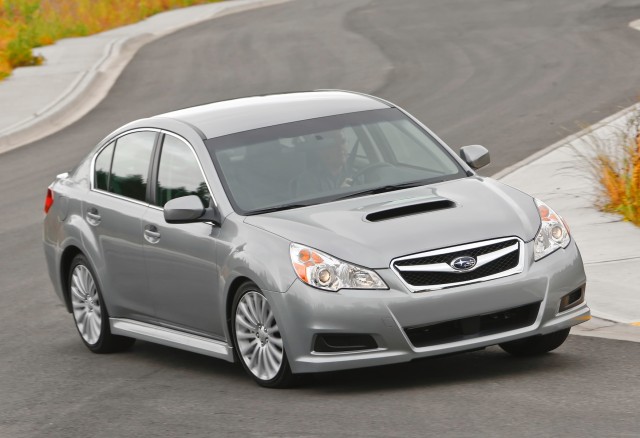 For a company as small and idiosyncratic as Subaru, launching a wholly new contender for the high stakes midsize market is a really big deal. The automaker is rightly aware that its 2010 Legacy won’t be overtaking the sales numbers of stalwarts Accord or Camry any time soon, but Subaru has high hopes and broad targets for the all-new sedan, nevertheless. The stated goal for the Legacy is to become the, “Driver’s car of the midsize segment.” Consider us intrigued.

That broad target part should make the new Subaru a rather intricate car to review, as the three different engines on offer, as well as the various transmission they come with, change the character of the Legacy as dramatically as we’ve seen for one vehicle model. Being as we’re primarily interested in the best variant for enthusiasts, we can make this rather brief. The 2.5GT is, hands down, the pick-of-the-litter for drivers.

Now, saying that isn’t the same as saying that the 2.5i and 3.6R models, in their various trims, are bad cars, far from it. Subaru is right to be proud of the EPA fuel economy figures that it has eked out with the Legacy 2.5i CVT—23 miles per gallon in the city and 31 on the highway—as that kind of frugalness in a car this practically packaged would seem to have a real home in the market. But, and we’re sure you saw this coming, the CVT doesn’t offer a very rich driving experience. The car is slower, louder, and less engaging than any other Legacy flavor.

That said, we have even bigger issues with the 3.6R model than we do with the fuel-sipping CVT. Consider this, for your extra liter or so of displacement over the turbocharged GT, buyers of the flat-six powertrain are rewarded with, less power and torque, slower acceleration, dead even fuel economy, and no available manual transmission (a paddle-shifting five-speed autobox is the only option). In it’s defense, the 3.6R is a little more than $2000 cheaper (depending on trim), than the $27,995 Legacy GT, and is able to burn regular fuel.

The good news is that, no matter which trim level you chose, Subaru has done a lot of work to make the Legacy roomier and more usable than ever before. By stretching the wheelbase by 3.2 inches—though increasing the overall length of the car just 1.4 inches—Legacy’s cabin has vaulted to the top of its class for interior volume. These backseats are seriously spacious, allowing a six-foot passenger to sit behind a six-foot driver with no trouble at all. Size of the trunk and the fuel tank (up to a whopping 18.5 gallons) have increased as well, but critically, Subaru claims a maximum curb weight increase of just 65 pounds over 2009 models.

Despite the stretched wheelbase, on road driving experience in the Legacy is very much like that for a much smaller sedan. The steering very much in line with what we’re used to via the Impreza WRX, great turn-in with a fast ratio, slightly lighter than expected without being disconcerting, and with better-than-average feel. We’d love for the wheel itself to be downsized in radius, and beefed up in thickness.

Unfortunately, our complaints about the new Legacy’s interior fitment didn’t end with the thickness of the steering wheel. The cabin shapes and surfaces actually come off better, to our eyes, in the lower cost trim levels, where the malignant addition of “wood” trim is kept down to a dull roar. As is the often the case with cheaper looking interior plastics, we’d advise sticking with black over the lighter colors. Functionally too, the Legacy cabin falls down a bit, most notably with the horrible placement of the electronic emergency brake; found right above one’s left knee, below and left of the steering wheel. Radio and HVAC controls seemed logical and simple however, and the optional Nav screen was both large, and bright.

Overall the Legacy felt quite athletic over the shore side route we drove, miles from Seattle’s city center. Subaru’s Symmetrical All-Wheel Drive, just seems to get better every time we have a chance to test it in a performance-oriented setting, as here. Our day of driving was speckled with rain, but even on newly damp asphalt we never lacked for grip. The Washington roads on offer were far too smooth (at least for a Michigan boy) to get a real sense of how the suspension dealt with bad surfacing, but our impression over the test was that of a well-controlled ride, leaning a bit to the soft-side. Still, Legacy felt rigid in the corners, perfectly happy to push through high-speed sweepers flatly. We even put a little bit of a scare into our Subaru PR ride-along on one of our more daring passing maneuvers—always the sign of an entertaining car.

We were also happy to note that the Legacy offered excellent visibility, allow drivers of all sizes to place the car as needed on the road. Too many sports sedans, in our estimation, offer scads of performance with no view, which naturally causes a driver to back off. It’s good to see where you’re going, especially when you’re going there fast.

And make no mistake; you’ll want to go fast if you spec your ’10 Legacy with the utterly lovely, turbocharged 2.5-liter boxer four. The engine boasts a larger intercooler and increased boost pressure versus the 2009 version of the powerplant, giving the car 265 horsepower and 258 pound-feet of torque (output gains of 22 and 17 respectively). The extra power is nice, but what we noticed the most was the serious decrease in the time it took to deliver boost from the turbo. Subaru has fiddled with its forced induction system, including mounting the turbocharger below the engine, to achieve what it claims to be 30 percent quicker spooling time to maximum boost pressure. These efforts really show on the road, where the power delivery is far more linear and strong from low revs than we’ve yet experienced with a turbocharged Subaru. Mid-range thrust is impressive and suitable for quick passing on two-lane roads. Acceleration should be in the sub six-second range, though the automaker has yet to release official performance data on that front.

The Legacy GT’s six-speed manual, the only transmission available for the GT, may have felt worlds better than the forgettable CVT and automatic trannies that we drove that day, but in and of itself it was pretty average. Throws of the shift lever were accurate, but too light, contrasting badly with the nice weight and travel of the clutch. Something slightly more mechanical, and shorter of throw from the aftermarket would likely work wonders here. Perhaps Subaru’s Tecnica International division (re: STI) has something up its sleeves?

As far as STI goes, we’d be slightly remiss if we didn’t mention how intentionally coy the Subaru PR folks were being on the topic of the ultimate performance treatment for their new Legacy. Stopping short of saying that a Legacy STI was upcoming, there were plenty of mentions of possible “future models.” We can’t help but think that the STI treatment, giant wing and whatnot, would do wonders for the Legacy visually, to say nothing of the added fun factor. It would also do wonders for Legacy’s pretensions as a class leading driver’s car…do it guys.

As it stands, we think that the 2010 Legacy GT will hold up very well against the mainline competition for buyers that are looking for something more performance oriented, and for those who aren’t afraid to stand out from the herd. Those bold consumers will find an excellent package of usability and pace—just the thing Subaru has become so adept at offering.