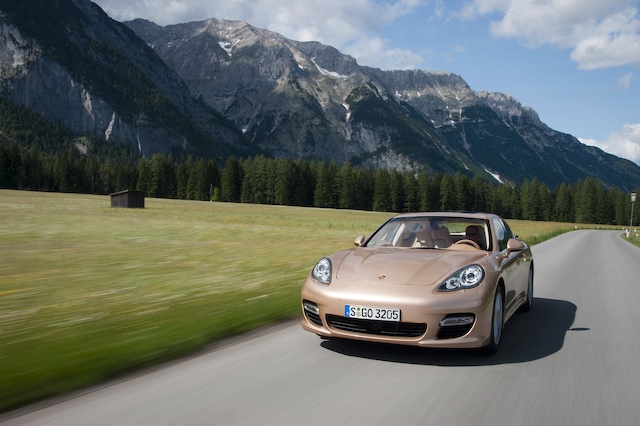 Not as controversial as the Cayenne was in 2003, the Porsche Panamera four-door sports car makes sense no matter what you are, we say. We’re hot from the driver’s seat and we like.

We’ve personally been present at all of the Panamera events leading up to today’s long awaited drive and we can say honestly that the Porsche luxury liner has looked better and better to us with each walk-around. Whether witnessing in the clouds above Shanghai, in the passenger seat at the company’s Weissach tech center, or driving it here in the Bavarian Alps, we are now certain that the Panamera is at the very least a trueblood modern day Porsche.

Whether one likes the packaging of the car is up to the individual but Porsche board members present at this event assure us that there are more than enough individuals out there worldwide who are putting in advance orders for the Panamera. The objective yearly for the big-hatch sedan is 20,000-plus deliveries to customers, upwards of 80 percent of these buyers being new to the brand. Basically, spot-on with the original sales goals of the Cayenne (which sold more like 40,000 units annually in the first couple of years).

These two days we’ve driven the bidgeezers out of a Panamera Turbo and a Panamera 4S, both with the “optional” seven-speed PDK automated manual dual-clutch gearbox. (Optional in quotes because every single Panamera shipping to North America comes thus equipped.) We also drove the base Panamera S with the Euro-only six-speed manual just as a curve ball exercise.

Factual stuff to know besides the volume goals for the grand tourer – one third of that 20,000-plus is still intended for North America – are prices. The Panamera S starts at $89,800, the 4S at $93,800 and the Turbo at a walloping $132,600 once U.S. deliveries begin in October. When we mentioned that those prices are all over 30 percent above what gets asked for the equivalent Cayenne using the exact same drive- and powertrains, one board member reminded us that Mercedes uses the same essential price difference between the ML63 and S63 AMG models. (He then also jokingly said that if we go by sheer cost per pound that the Panamera is actually over 50 percent more costly than the Cayenne.)

Once opening the driver’s door, sitting in the cockpit, touching everything, and driving over all kinds of road surfaces at all speeds, we cannot lament the substance of the Panamera nor the incredible build quality. These reactions certainly are not surprising and these aspects are exactly why Porsches of almost any sort will always find enough buyers. We anticipate an awful lot of fence-sitters warming up to the Panamera in the first couple of years.

This heavily adapted chassis-body from the Cayenne gets assembled at the same factory in Leipzig, Germany. The Panamera dimensions read 195.7 inches long, 76 inches wide, 55.8 inches high, and a wheelbase of 115 inches. That makes it 7 inches longer and 11 inches lower than Cayenne. Width is the same between the two and the Panamera wheelbase 2.5 inches longer. Quoting specs from the respective Turbo models, curb weight for the Panamera Turbo at 4,344 pounds is some 848 pounds less than its Cayenne counterpart.

Whether speaking of the naturally aspirated or biturbo version of the M48 4.8-liter V-8 engine, the much lighter and low Panamera drives every bit like a big four-door sports car should, eventually leaving way behind in the curves even the S 63 or CLS 63 AMG, but more obviously so when speaking of the 494-horsepower Panamera Turbo benefiting also from the 516 pound-feet of torque between 2250 and 4500 revs. And make that 567 lb-ft in Overeboost when you have the Sport Chrono Package and the suspension, transmission and throttle in Sport Plus mode. In the Turbo with this trim, it will take just 4.0 seconds to get to 60 mph from a stop, 4.2 seconds if you are without Sport Chrono.

We dug bigtime our Panamera S with six-speed manual as this really is a sports car with a little heft and four doors. Even with its 394 horses and 369 lb-ft of torque having to haul this biggie around, the manual action is that Porsche manual linkage that we always enjoy while hammering through curves and gears. Oh well, we no gettie, but the next best alternative is the full-optional Turbo with the PDK. Still not in love with the steering wheel toggle switches for the interface, but the Sport and Sport Plus modes make it supportable. With Porsche Active Suspension Management and Porsche Stability Management, too, there are several distinctly different good driving experiences in this one car.

One gotta-get item is the optional sport exhaust that also gets its own console button. This is essentially a Loud button as on most Aston Martins. People outside the car assure us we were loud when at full throttle, because the interior is so well insulated that we heard little of the sonic storm.

Our highest speed reached was just over 180 mph for a long stretch of no-limit autobahn and the stability was pretty terrific. Watching the variable-angle 2D+ rear wing of the Turbo trim deploy itself as we streaked past 56 mph and then 128 mph was a fun spectacle and the bigger wing do help matters.

But enough for now. There’s a bigger feature on this drive coming in the next issue of Winding Road, so stay tuned for more details and sensations.