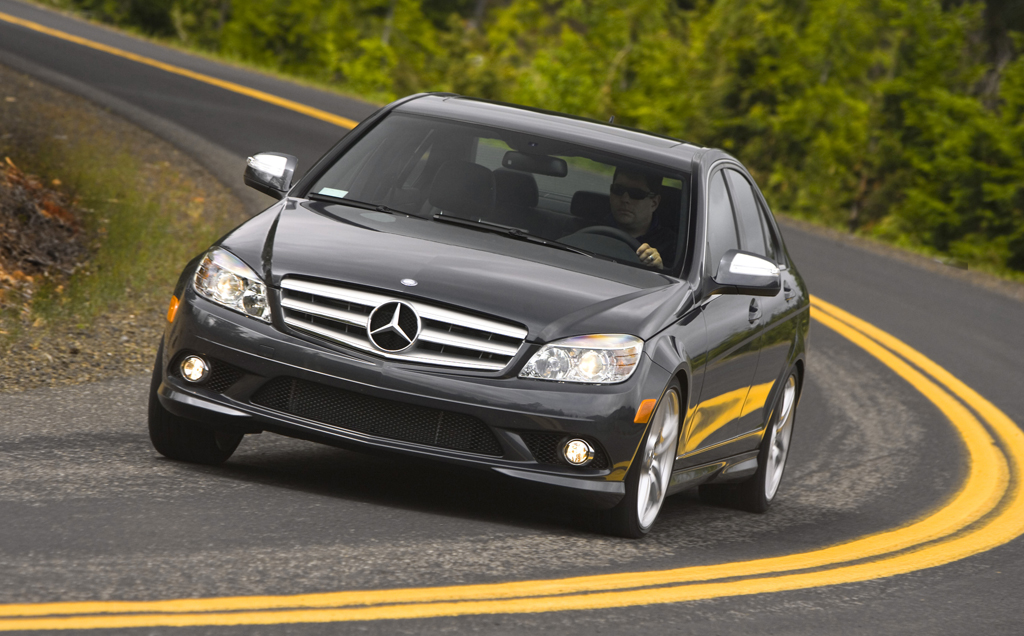 Mercedes-Benz was kind enough to give us a week in the not-quite-AMG-spec C350 Sport Sedan. This competitor to the BMW 335i and Audi A4 S-Line, came lightly equipped with the Multimedia Package and the Advanced Agility Package. We had one week with the C350, and here is what we thought.

Our tester’s 268 horsepower and 258 pound-feet of torque is generated by a 3.5-liter V-6. Mated to a seven-speed automatic gearbox, the V-6 sends all of its power to the rear wheels. All-wheel drive is available, but only on C300 models. We thought that the engine/transmission pairing was a good setup.

We found throttle tip-in to be smooth, while the twin exhaust tips expel a nice noise as the engine revs build. The engine note isn’t as maniacal as BMW’s straight-six or as buzzy as Audi’s 2.0-liter turbo. It produces a bit of a mellow howl. As the engine gets moving though, the power rises in concert with the revs, connecting the sound to the motive experience. There isn’t, it’s fair to say, the kind of dramatic power delivery that can be found with the competitive set’s blown motors, but the naturally aspirated V-6 makes up for that dynamic lack with smoothness. It didn’t offer the same visceral punch as what you would get in a BMW though, nor the Audi, for that matter. While it certainly wasn’t wholly emotionless, the motor was lacking the sonic character and depth to be truly exciting, most of the time.

Unlike a lot of new cars today, the C350 still soldiers on with a traditional automatic gearbox, as opposed to the new generation of dual-clutch transmissions. The seven-speed affair in our tester has a manual mode that can be activated via paddles behind the steering wheel or at the gear lever on the center console.

Left in full-automatic mode, the gearbox goes about its business, trying not to be noticed by the driver. Shifts are surprisingly seamless, and it happens at the right time. Run the car up to redline, and there will be no early shift. The transmission will hit redline and then slam into the next gear, ready to go again. Switching to manual mode doesn’t produce noticeably faster shifts, but it can make you feel more involved in the drive. While not as quick as a DCT, Mercedes has still produced a great automatic.

The C-Class definitely leans towards the comfortable side of the handling equation. That being said, the C350 will dance if you tempt it. The steering has a nice weight to it, but you don’t really get much information from it. You don’t feel bumps, or changes in grip from the road surface through the steering. It may be good for a highway, but it isn’t communicative enough to inspire confidence on a twisty road.

The only outright bad thing about the C350’s handling is that the competition is noticeably better. A 335i or an A4 simply feels more tied in, and more talkative than the Benz. Communication takes place through the seat of your pants in the Mercedes, with little being discernable through the steering. Grip levels are telegraphed through the suspension, but it would be nice to have a better idea of what the road surface was like. The body rolls a bit too much when being pushed, but otherwise the C-Class would be a totally acceptable highway cruiser.

The cabin of our tester was decked out in a business-like black leather, with black plastic and splashes of wood trim. While not the most beautiful interior ever designed, it did present an air of understated luxury. The ten-way adjustable, heated leather seats proved to be supportive, while the leather-wrapped steering wheel was large, and felt rather unwieldy, especially if you favor a seating position close to the steering wheel. The C-Class gets bonus points for the Command navigation screen that pops out of a cubby on the dash.

Dynamically, the C350 doesn’t quite match up with the competition. It just doesn’t fit the bill as a proper sports sedan like the 3-Series or A4. What it does do (which its Germanic cousins can’t pull off to save their lives) is really coddle its passengers. It is much more comfortable than a 3-Series or A4, which makes it a much more livable car day-to-day. This is especially true with the winter-worn roads that we, and our fellow snow belters, have to drive on each day.