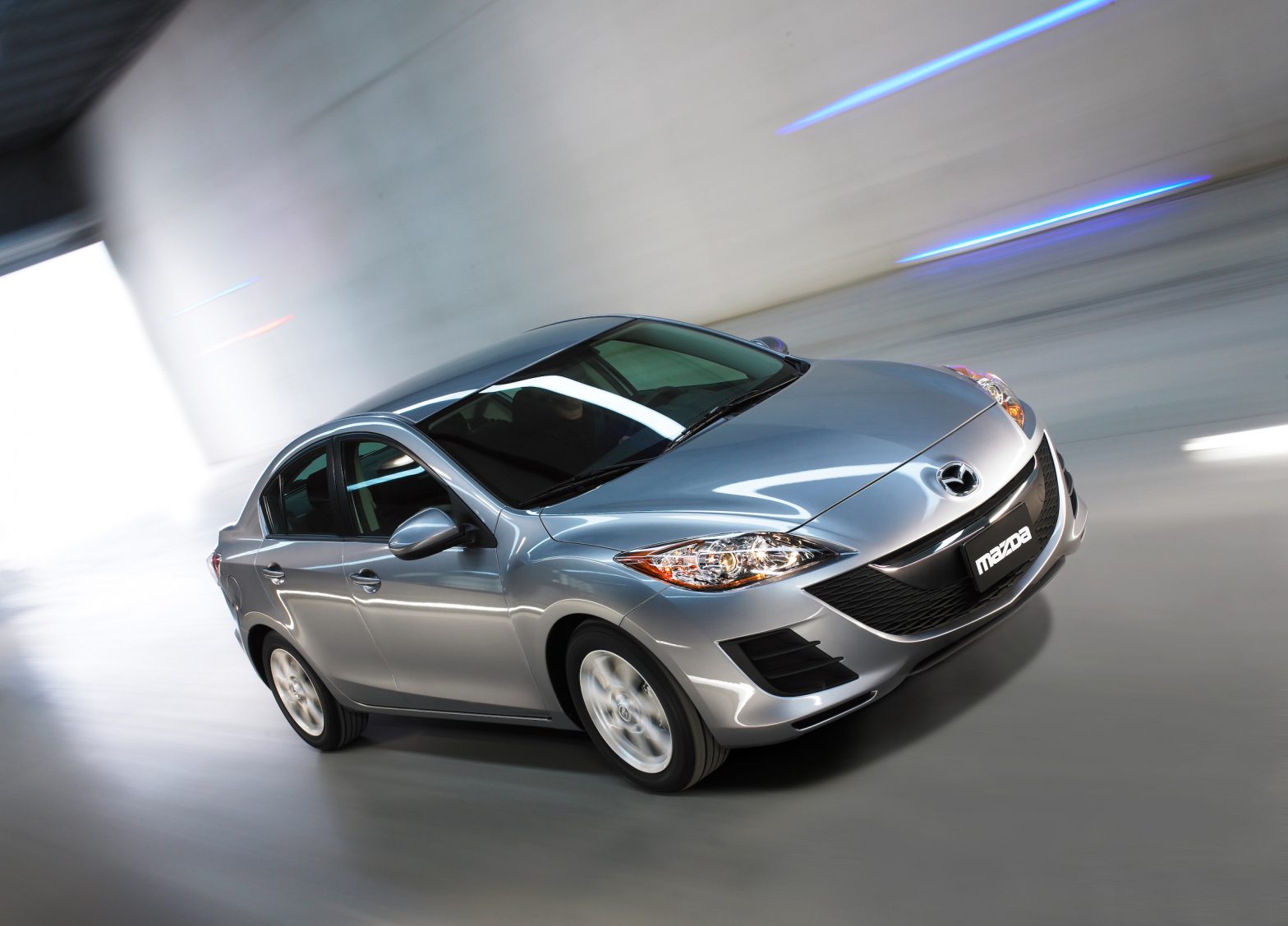 Having already familiarized ourselves with the Mazda3 s (not to mention the devilishly fun Mazdaspeed3), we got the chance to get behind the wheel of the 2010 Mazda3 i Touring. Of course, we were interested to see how the small-displacement engine, only available in the four-door version, contributed to the overall driving experience of the beloved 3.

The Mazda3 i’s 2.0-liter inline four-cylinder engine provides 148 horsepower and 135 pound-feet of torque. It’s the sort of power that makes the car very capable under most situations. Especially in normal city driving, the engine feels like it is up to the task at hand. At other times, though, it definitely feels like it is lacking. When entering the highway, the engine feels out of shape, and has trouble getting the car up to speed briskly. Unlike the 2.5-liter mill in the Mazda3 s, really hammering the throttle offers only mild acceleration for passing maneuvers. Once up to speed, though, it doesn’t take much effort to keep the car moving, and lifting one’s foot for a little while won’t lead to a huge and immediate deceleration that requires a lot of effort to recover from. Just don’t expect a sense of urgency from under the hood when you put the pedal to the floor.
The suspension is a double-edged sword. We like a communicative ride that conveys information about the road surface and grip, and the Mazda3 has that on offer. Often times, however, the ride felt bouncy. Slight dips and crests in the road are magnified, particularly up front. This actually seemed to decrease the degree to which we could feel the road through our seats, as the swelling up and down movements drown out the smaller bumps and pings that provide us a good sense of the ground passing by underneath us. Not to mention the discomfort involved with a bouncy car. While many drivers will overcome, or not even notice the motion in the suspension, more sensitive occupants may complain about the ride. Honestly, we haven’t noticed it on previous short drives. It was only after spending a lot of miles with the 3 that we began to take note of it.
The controls of the Mazda3 are good for the most part. There’s no dissonance between driver input and automobile reaction. Even though steering feels a little dead on center, as soon as we put it hard into a corner, the steering tightened up, allowing us to really toss it around in the bends. While that initial feeling of play in the wheel doesn’t inspire much confidence at first, we liked the way the car happily changed direction with a modest flick. Shifting into manual mode, often a futile gesture in exercising more control over the car, actually provided some rewarding shifts. However, we would have preferred some sort of paddle mechanism to keep our hands close to the helm, and, of course, nothing would have beat the standard five-speed manual gearbox, a feature that Mazda always seems to do very well.
Over the course of our time with the Mazda3 i Touring sedan, we encountered a range of conditions. In the wintry Michigan clime, the Mazda had no trouble in soft snow, or on a mixture of dry pavement and ice. As long as there was some normal surface available, the 3 happily and steadily motored along. The only issues we found with stability were on icy roads. While any car can get squirrely when roads get slick, the 3, on its all-season rubber, had trouble keeping up with the rest of traffic when the mercury dropped. As other vehicles sped by us, we cursed the traction control light blinking at us from the instrument cluster as the nose kept pulling toward the side of the road. We rejoiced when the salt truck got far enough in front of us that we could finally keep up with other drivers.
Ok. Enough nitpicking. To be honest, we only nitpick a car like this because we expect so much from it. The Mazda3, at its core, is meant for the driving enthusiast on a budget. While the 2.0-liter mill might be a bit asthmatic for those of us with a heavy right foot, the design language that speaks to drivers is there. If someone is looking for a car that is fun to drive, responds well to driver input, and costs well under $20,000, look no further than the Mazda3 i. If you need that extra pep, though, we definitely suggest springing for the 2.5-liter, 167-horsepower engine found in the Mazda3 s. You’ll be much happier when you take to your favorite winding roads, you can still stay under $20K, and the six-speed manual comes standard.
Even if you’re not in need of a drivers’ car, the Mazda3 i Touring is a good buy. It has a great interior, sharp looks (though we do prefer the more muscular profile of the utile five-door version, but that puts the price tag above the $20K mark), and 25/33 mile per gallon fuel economy. While it may not “zoom-zoom” quite as eagerly is its close relatives, it will get the job done, and in a way that offers a rewarding driving experience.
Tags:
2.0-literall-season rubbercar movingfour-doorJohn Beltz SnyderMazdamazda3mazda3 i touringMichiganSedanUSD