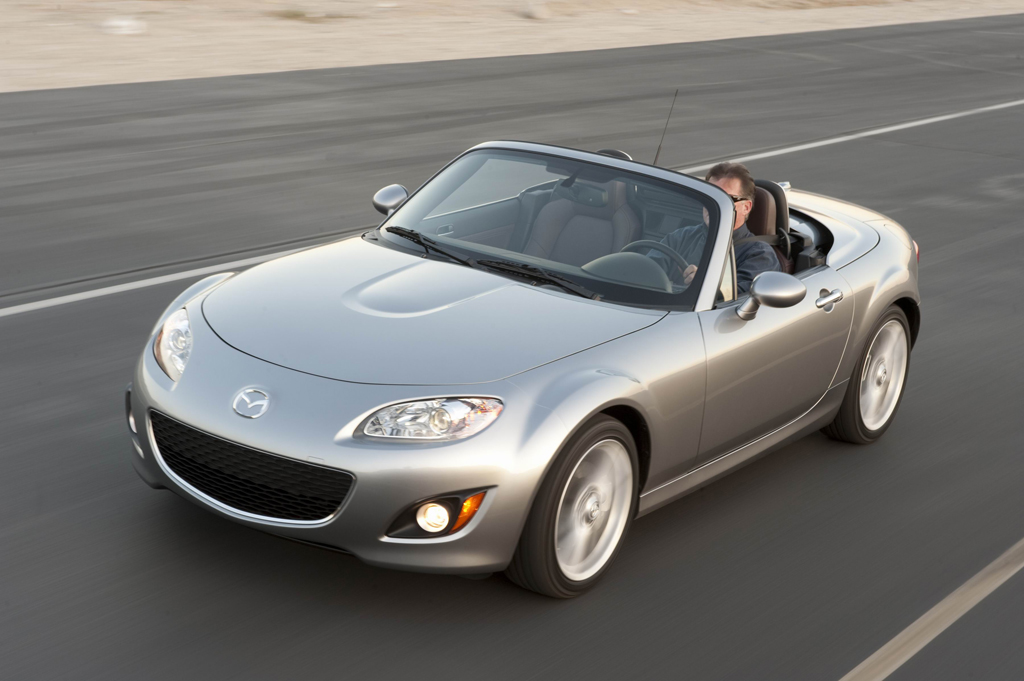 The Mazda MX-5 (it isn’t a Miata anymore) has grown up. What started as a simple revival of the classic British roadster has blossomed into a usable, everyday car. Our tester is the Grand Touring trim with the optional Power Retractable Hard Top (PRHT). Not exactly traditional MX-5, but we won’t complain about the all-weather ability of the tin top, or the heated leather seats (it may be July, but those seats would really extend convertible season). Other toys include a Bose stereo, Bluetooth, Mazda Advanced Key, xenon headlights, and Sirius satellite radio. All said and done, our little Mazda would require a check for $31,300 to take home.

This is the third-generation of the MX-5, and has been a bit of a design departure from the previous models. It is visibly larger, but it doesn’t drive larger than older Miatas. Its flared wheel arches, hood bulge, and slightly angled headlights present a more aggressive look, while its Cheshire Cat smile is arguably the best looking iteration of Mazda’s Nagare design language. In back, the elliptical taillights, shark-fin antenna, and dual exhaust present a similar level of aggression. The real question of convertible attractiveness is how it looks with the top up and with the top down. In the case of the MX-5 PRHT, it looks great with top down, but it looks just as natural with the top up.

The only engine available on the MX-5 is a 2.0-liter I-4, which produces 167 horsepower and 140 pound-feet of torque. It may not sound like much, but this engine does a good job of hauling around almost 2600 pounds of Japanese roadster. Despite the lack of torque, going flat-out from first gear offers brisk acceleration. You won’t be chasing supercars anytime soon, but the shove is more than adequate. Pushing this motor is a joy, with its raucous engine note, and abundant power between 3000 and 6000 rpm.

As we said, the MX-5 likes to rev. Keeping the engine in its happy place is as simple as a flick of the wrist, and the excellent six-speed manual transmission reins the angry little motor in. The gearbox isn’t as smooth as a Honda or BMW, but the slight notchiness is easily tolerable. The throws are short, making a run through the gears quick and enjoyable. The clutch is on the light side, but is very easy to modulate, with pedals that are perfectly spaced for some heel-toe antics. Don’t be surprised to find yourself downshifting, accelerating, and then upshifting for no apparent reason. This is arguably one of the best engine and transmission combinations available in this price range.

The MX-5 tries hard to be comfortable on the long drive, but it just can’t get over its sports car roots. We had an almost 550-mile road trip to explore the comfort of our Mazda, as we got a call to rescue some friends who lost their car keys in a river near Boyne, Michigan. Our tester was optioned with the $500 Suspension Package, which equips the roadster with a sport-tuned suspension and Bilstein shocks. Combine the aggressive suspension with a short wheelbase and seventeen-inch wheels on relatively low-profile tires and you get a recipe for a rough ride. On surface streets, the MX-5 bounced and crashed, with its short-travel suspension transmitting all but the most minor imperfections into the cabin. On the bright side, playing “Dodge the Pothole” makes up for the mainly straight roads of the area. Things were somewhat better on the smoother freeways of Metro Detroit. Bumps and breaks were still felt, but the added speed and lower frequency of imperfections made for a slightly better ride. A plus of the PRHT is the added rigidity severely limits cowl shake.

Ignore the rough ride, find the right road, and the MX-5 performs with verve, effortlessly zipping around turns. The bonus to our forced road trip was the super smooth and twisting roads of northern Michigan. This car talks to you through every medium; the front end communicating what the road surface is like, with the rear end subtly dancing around and relating what levels of grip are available from the Bridgestone tires. Steering feel is top notch, allowing you to make slight changes with big results. The combination of the steering and the front suspension means you are never left guessing as to what the front tires are doing. Oversteer only rears its head when you ask for it, and is easily controllable after that, thanks to the limited-slip differential (also part of the Suspension Package). The MX-5 is easily accessible to drivers of various skill levels; keep the Dynamic Stability Control on, and the car allows just enough tail-out shenanigans that about ninety percent of drivers will be happy. Switching the DSC off allows more experienced drivers to explore the limits of the little roadster. Regardless of skill level, the MX-5 will put a smile on its driver’s face as wide as the one on the car’s front end.