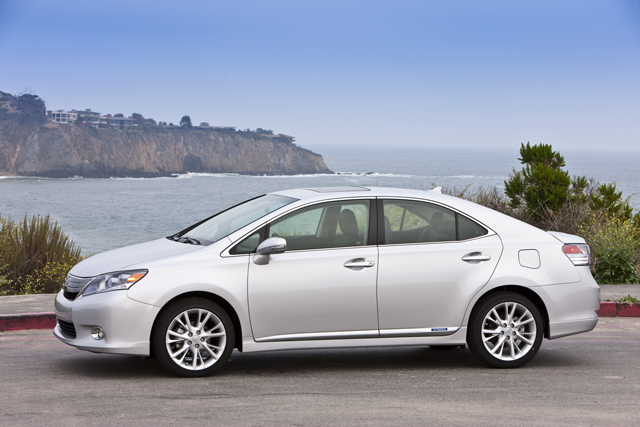 Don’t call it a Prius. First of all, the Lexus HS250h only gets a combined fuel economy average of 35 miles per gallon, compared to the Prius’s 50. They appeal to separate segments, have different engines, and the HS has many features unavailable to the Prius. The two cars even look totally different. The HS has had enough of being compared to its downmarket Toyota cousin.

If it weren’t for the badging on the bottom of the rear door to tell you that this car is, indeed, a hybrid vehicle, the HS would be able to pass as a plain old luxury sedan. Despite being designed to have a miniscule drag coefficient of 0.27, the profile doesn’t resemble the telltale bullet shape of vehicle platforms dedicated to housing a hybrid drivetrain. The HS looks classy, refined, and boring the way any luxury sedan should.

As for the drivability, the HS provides an isolated experience. Through insulation and aerodynamics, wind noise is basically nonexistent, and engine noise is reduced to a barely-audible, sad whine. The suspension gives a super smooth ride, and aimed totally at comfort. It’s still firm, and though it doesn’t give feedback from the road, is not floaty or springy. The steering wheel is simply an instrument to tell the car which direction to go. It seems that Lexus engineers wanted to remove the outside environment from invading the “driving experience.” Even the regenerative brakes, which are notorious among hybrids for having a distracting sticky feel, were butter-smooth.

Driver involvement comes in part from the hybrid system itself. In lieu of a tachometer, a needle points to various shades of green, which tell the driver how much power is being used, and whether the battery is charging. It encourages the driver to ease off the throttle to maintain fuel economy. Buttons on the dash select Normal, Power, Eco, and EV modes. The different modes, for the most part, simply alter the throttle response. EV mode, which is only available up to 20 miles per hour, keeps the engine from firing, and the HS cruises stealthily on battery power alone. In this mode, we were able to quietly sneak up behind joggers, which left us tempted to lay on the horn and see how high they could jump. We’re not that mean, but our mischievous side inevitably pondered all the possibilities of EV mode, which, when you think about it, are mostly limited driving quietly to avoid waking people up. Maybe it’s not the most practical feature, but it’s available.

It is a little off-putting to think that the HS, when equipped with the technology package, is smarter than many of the drivers on the road. It’s packed with enough technology to sate the geeky cravings of even the most fervent Sharper Image shopaholics. The first noticeable feature is the remote touch interface, which resembles a computer mouse, and gives the driver an intuitive way to navigate the complicated on-board computer. Through this device, the driver controls the navigation, climate, audio, and a slew of vehicle settings. Drivers, with a little exploration of the menus, get a car that is customizable in a different and more complete way than was previously available.

If one finds the remote touch to be too distracting while driving, the HS also includes a thorough voice recognition system that can do most of the things the remote touch can do. Press a button on the steering wheel, and one can vocally navigate the XM radio stations, make phone calls from a Bluetooth cell phone, change the temperature, or choose a different destination for the navigation system. Honestly, we spent a lot of time giving the car different vocal commands just for fun. Yes, it did feel a bit like being on the set of Knight Rider.

The Lane Keep Assist feature adds to the feeling that the HS is eerily intelligent. A camera in the headliner finds and reads the lines on the road, and calculates the vehicle’s position between them. It the car drifts toward the edge of the lane, it gives a friendly beep before steering the vehicle back into the lane. Theoretically, a driver wouldn’t even have to be conscious to keep the HS aimed down the highway.

The cherry on top, as if the rest of the quirky tech isn’t enough, is the heads-up display that appears to float about five feet beyond the windshield. The HUD simply displays your speed and, with a destination programmed into the navigation system, turn-by-turn directions. No, it’s not distracting, and yes, it did help us keep our eyes on the road instead of darting back and forth between the speedometer on the dash and the LCD screen displaying the navigation. The HUD can be turned off, dimmed, and adjusted within the field-of-view.

For somebody looking for an eco-friendly luxury sedan, the Lexus HS250h is a perfect fit, and it has the potential to be a huge success for Lexus. The HS is, however, not a car that speaks to the soul of a driver. It lacks the performance and involvement necessary to provide the thrills motorists like us live for. While we found ourselves entertained and impressed by the HS250h, we prefer a car we can drive, rather than a car that merely gets us from point A to point B in comfort. We don’t need all the bells and whistles the HS offers, but we’re sure there are plenty of consumers out there who think they do.

Click through the gallery above to see the 2010 Lexus HS250h.