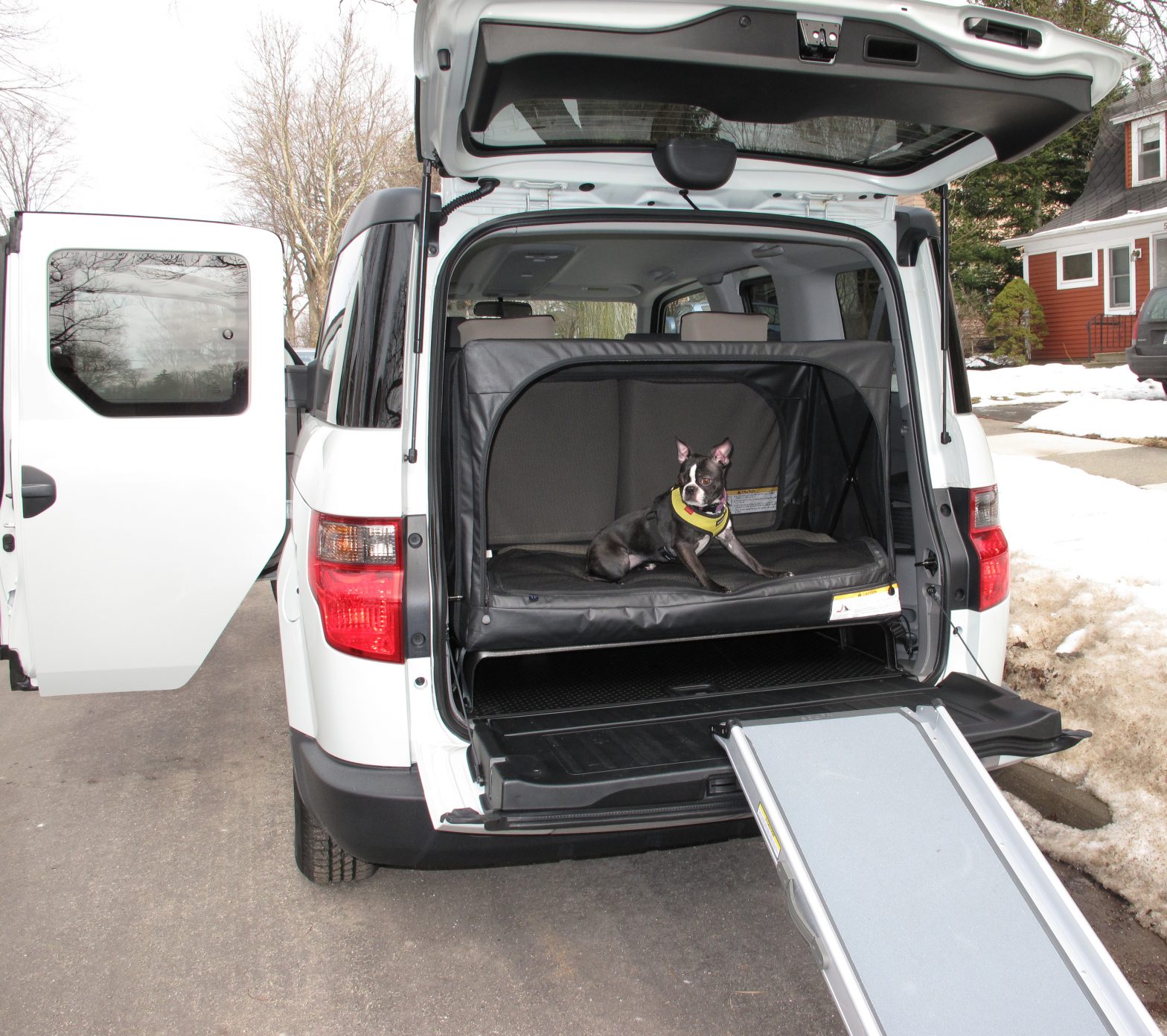 We’ve said it before: we love dogs. And, although the Honda Element isn’t necessarily an enthusiasts’ vehicle, we were enthusiastic about getting a chance to test the Dog Friendly edition (only available on the Element EX). We were eagerly hoping Buster and Magnolia, our test dogs, would enjoy it, too.

Before introducing the Element to the pups, we took note of its features. On the outside, It gets a couple unique badges—the words “Dog Friendly” on the back of the car, and a small, understated paw emblem on each side. Nothing flashy here. Opening the door we noticed a thick, black, rubber floor mat that extended throughout both rows of seating. They were covered in an obvious dog bone pattern. Cute enough. Custom fitted seat covers made of a thick, spandex-like material protected the rear seats. Taking up most of the cargo area was a large zip-open dog kennel with an integrated water dish. There was also a small fan in the rear, to help keep dogs cool during the ride.

Once we started driving, we noticed something banging around in the rear of the car. Upon inspection, we found a small ramp stowed underneath the kennel. With no way to properly secure it, we packed it back up in the cargo area, and tried to ignore the rattling and clunking the loose ramp made during turning, acceleration, and braking.

When we brought the dogs to the vehicle, they eagerly hopped in the back seat. They seemed at home on the seat covers, and it made us think of all the times in our own vehicles when it would have been nice to have seat covers like these. After taking the dogs to a wooded park, it would be nice to simply remove the seat covers, along with any dirt or slobber, and wash them. No need to lay down blankets or steam clean the upholstery. The rubber floor mats were also a good addition.

The trouble came when we tried to get the dogs in the kennel. First, the ramp is a bit awkward to remove and set up. With some fuss, it slides out from under the kennel, slides to nearly double in length, then rests precariously on the tailgate. Buster, a stubborn fellow, didn’t like the look of the ramp, itself sturdy, but unattached to the vehicle. Magnolia, too, was unwilling to climb the ramp. As she is a smaller dog, we think the height of the ramp intimidated her.

As Buster again climbed into the back seat, and kept his sniffer pointed at the vented window (another dog friendly feature that happens to be standard on the Honda Element). We lifted Magnolia into the kennel where she remained content, yet confused. When ready, she reluctantly used the ramp to exit the kennel, but it seemed she was starting to get used to the idea. We still think a wider, more secure ramp would have made a big difference for both dogs.

After a bit of testing, we dropped the somewhat annoyed dogs back at home, and later took the four-wheel-drive Element for another spin. We were blessed with another Michigan winter snow dump, making the roads quite treacherous. The Honda Element handled wonderfully, communicating (in the way Hondas are known to do) the road conditions through steering wheel and seat. Despite the rattling of the ramp in the back, we could feel the road beneath us, and the amount of grip it provided, inspiring some much-needed confidence on the sloppy highway surface. This, we thought, should be the selling point of a Honda Element—not some rather gimmicky option package.

For someone who takes their dogs everywhere, some aspects of the dog friendly package could be hard to live without after trying them—particularly the additions meant to keep the vehicle clean. Many vehicles could benefit from optional well-fitting all-season floor mats and dog- (or child-) proof seat covers, though one could provide this oneself with little effort and money. The ramp, while an excellent concept, is executed poorly. It needs to be easier to use, and more secure, both when stowed or in use. The dog friendly package would benefit greatly by simply better integrating the ramp into the cargo space.

In general, though, we think the Honda Element is already a dog friendly vehicle compared to most, even without the option package. For someone who absolutely must have everything for their dog, though, the Dog Friendly package adds a bit of canine charm to the car, despite only modest improvements in functionality. For everyone else, we say buy the Element if you like it, but save the $995, and do the dog friendly upgrades yourself.