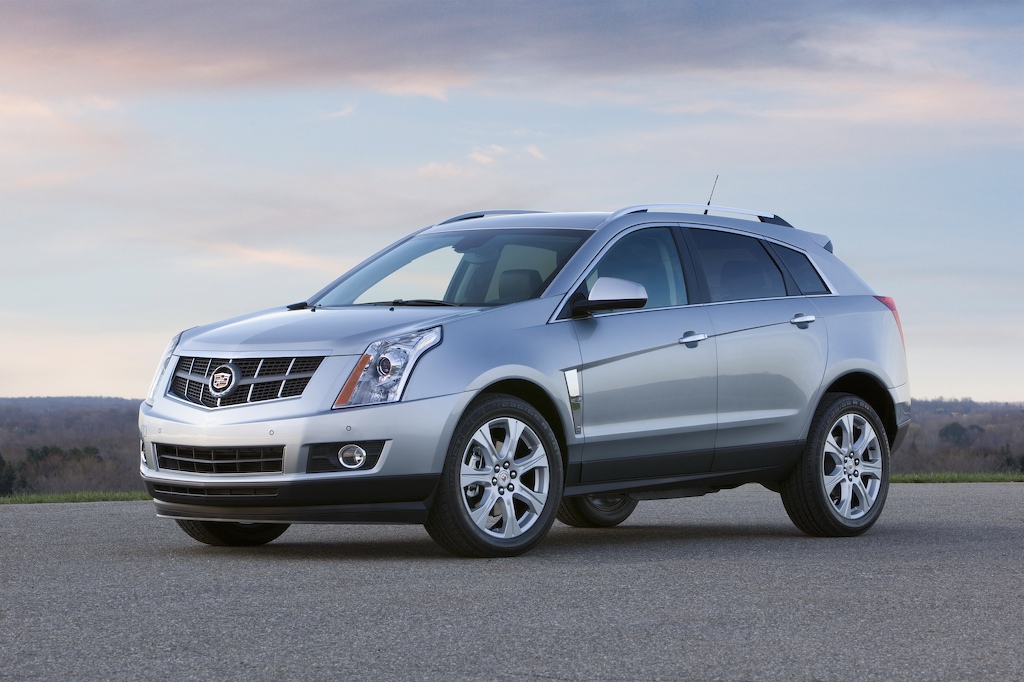 With no V-8 engine option for the all-new, 2010 model year Cadillac SRX, the top-of-the line powertrain becomes the turbocharged, 2.8-liter, 300-horsepower V-6 engine. That in and of itself is a relatively significant sign of the times for General Motors’ flagship division, as performance-tuned V-8s have usually held down the fort for speedy Cadillacs up to this point.

When we recently revisited the base SRX, it of the 3.0-liter, 265-horsepower, naturally aspirated V-6, we found the powertrain to be potent enough, but a little out of character for the marque. The V-6 makes its power in a relatively rev-happy, noisy way, and while we aren’t normally opposed to those characteristics in an engine, the raucousness felt a bit untoward in the SRX. (Plus, all that noise didn’t do that much. We don’t mind the CTS-V’s manly engine howl, but since we’re usually doubling the speed limit when we hear it, the sound makes a bit more sense in its environment.)

Putting the turbo motor in the SRX makes the crossover almost immediately feel more in line with the badge it wears on that big, grinning grille. The 2.8 has got 295 pound-feet of torque (compared with 223 for the 3.0-liter), allowing it to offer a lot more shove with a lot less struggle, especially from low speeds. The quieter running, at lower revs, with more power certainly allows for much more of a “wafting” sensation at normal cruising velocities. We think that, old or young (and the SRX styling would seem to lean toward the young), this is a core quality sought out by Caddy shoppers. It’s a feeling of power that would normally require that traditional V-8 to achieve, with the added bonus of fuel economy that is exactly equal to that of the un-blown V-6 (17/23 miles per gallon city and highway). Have we mentioned how much we love turbos lately?

From the standpoint of overall handing characteristics, and in the AWD trim we sampled with the 2.8-liter turbo, we think it’s fair to rate the SRX as a little better than average as far as mid-size crossovers go, but not great. We found the chassis to be pretty lively and tossable, aided a great deal by a very responsive, if numb, steering wheel—at least when traveling at sort of normal speeds. Dive too hard into a sharp bend, or push a bit through multiple corners, and the SRX front end will start to feel pretty ponderous. We coaxed a lot of understeer out of the Cadillac on several occasions over our test drive. Again, that’s not terribly unexpected for a vehicle of this weight and class, but it’s clear that the SRX is not a hidden gem of a “driver’s” crossover. Those looking for the dynamic equivalent of a CTS would be better served by the CTS Sport Wagon, for sure.

Visually and ergonomically, the new SRX is pretty delightful, and worth the money spent for the premium badge. Cadillac may not have completely recovered the fit-and-finish vis-à-vis the European competition that once made its cars the “standard of the world,” but it is closing the gap. Our tester’s interior seemed well made, while being pleasant to the hand and eye, controls were easy to use, and features were technologically rich. Cadillac might be going a tiny bit overboard, if anything, on the technology (there’s a Cadillac logo that fades into view on the digital speedo when you start the car that we found a tad gimmicky), but we can fully accept that a lot of customers will be wowed here.

You can judge for yourself the success of the crisply bent exterior lines, but we have heard more positive feedback than negative. Our only gripe with the curbside view is the chromed slash behind the front wheel well.

Premium crossover shoppers will likely be pretty tickled overall if they opt in to this new generation Cadillac SRX, as long as they’ve left room in the budget for the turbo engine option. Trust us, it’s worth it.

First Look: 2011 Hyundai Azera Is More Of The Same