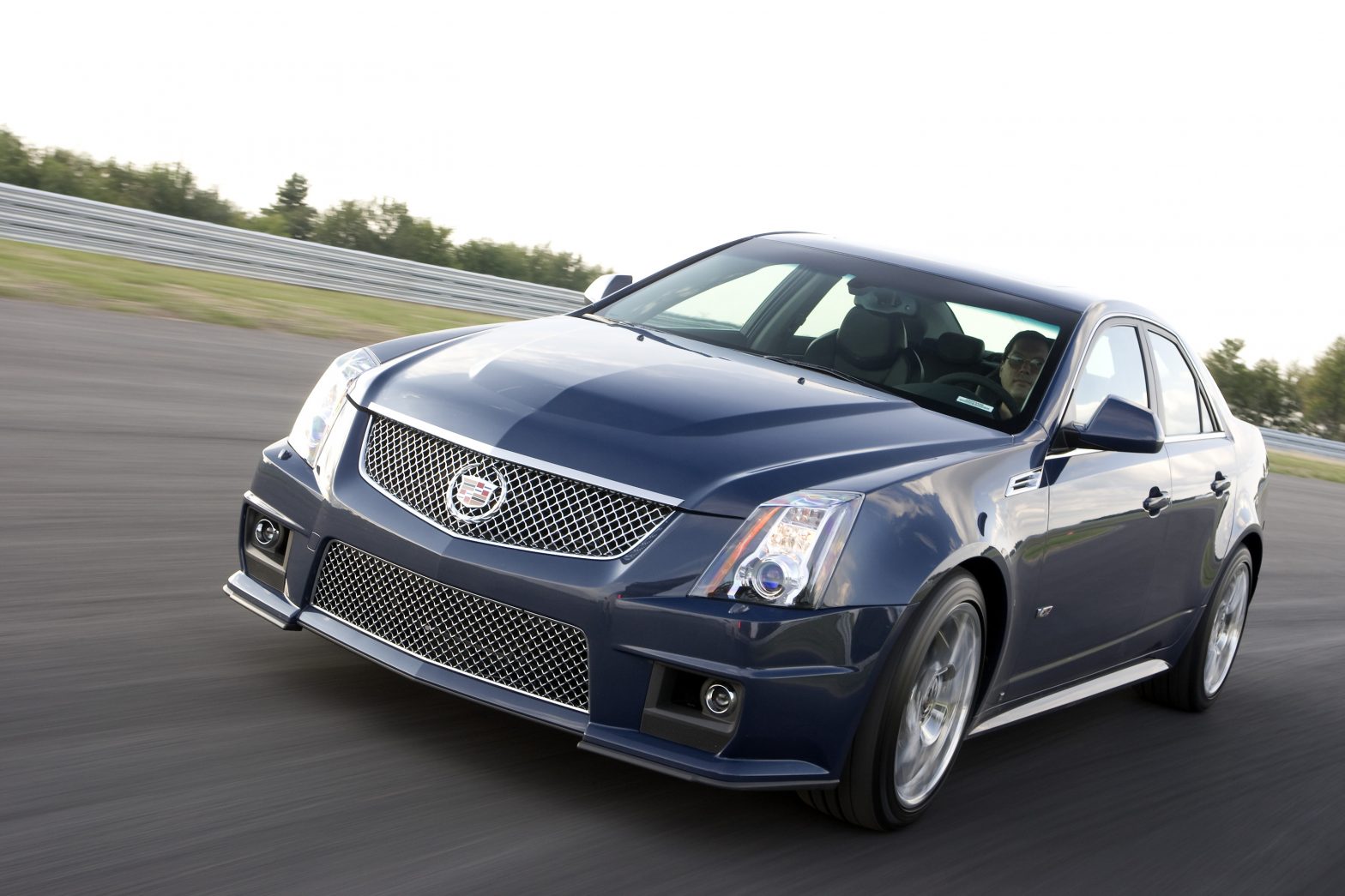 The cabin of the 2010 Cadillac CTS-V spoke to the nature of the car. The gear selector and steering wheel were clad in suede, begging to be held. The instrument panel shone brightly, with the small boost gauge in particular catching our eye with a promise of some supercharged fun. Prominent contrasting stitching on the dash looked classy and bold. The Recaro seats, though totally adjustable, held us firmly in a position of attention, the bolsters prodding us into alertness. The V-badged Caddy reminded us a bit of the Concorde jet—sleek, luxurious, supremely fast, yet odd to behold. There is no question, even before firing up the CTS-V, that this is a driver’s car.

Power delivery in the CTS-V is pretty much what one would expect from a supercharged 6.2-liter V-8 in a Cadillac. It’s strong, smoothly rising, and absolutely wonderful. The same amount of power in other rear-drive sedans would be a lot more hairy, but the CTS handles it well, putting it to the ground evenly, and without too much noise. While we could make the case that the sound of the engine and exhaust could stand to reflect the brawn under the hood a little more, we understand why Cadillac would want to cater to buyers who may not fall into the if-it’s-too-loud-you’re-too-old camp. Regardless of how it sounds, with the pedal down, you’ll be handily aware of the ample power on offer.

It was rainy here in southeastern Michigan for the days we had the keys to the CTS-V, and dry patches of road were few and far between. We sought them out and made use of them when we could. We discovered, in the CTS-V, a sedan that walked the line between sporty and luxury with aptitude. On straight roads, whether smooth or bumpy, it felt neither stiff nor soft. Irregularities were communicated to the driver, but in a subtle way, mostly through sound and seat, and never jarring. Hitting the curves, the suspension rose to the occasion, and adapted quickly and appropriately to whatever we threw at it. It remained poised and in control.

On loose or wet surfaces, the CTS-V took on a slightly different character. When driven hard, it still really wanted to give the appearance of great power being handled with ease. Without the advantage of all-wheel grip, however, the rear end floated from side to side behind us, within the limits of the electronic nannies. Despite losing traction, the car was determined to deliver the power to the ground, and took on a feeling of hovering down the road at the very brink of peril. It never lost its composure, however, which spoke volumes about how finely tuned the traction and stability control are in a vehicle that refuses to give up the dual role of performance and luxury.

Regardless of surface, we got loads of enjoyment just from getting that big, angular rear end out around corners. It was something the V did happily over and over, and with a confident amount of control and communication. With traction and stability set to Competition mode, the possibilities for fun grew even greater, and the car seemed like it would have felt truly at home on some dry, twisty track.

We’ve often praised the virtues of having a do-it-yourself gearbox in most drivers’ cars we have reviewed, probably to the point of tedium. But not without powerful justification. This was our first time trying out the six-speed automatic transmission with which our test car was fitted, and it only reinforced the nearly universal rule.

The setup was familiar stuff; the transmission had the standard “D” mode, and by pushing the gear selector to the right, it would shift into Sport mode. While in Sport, a manual shift input, whether from lever or wheel, would leave the gear selection up to the driver until put back in “D.”

On the back of the wheel, rather than actual paddles available to shift gears, are two small buttons, similar in feel to those in other General Motors products we have tested, such as the Chevrolet Camaro (in whose case at least an attempt was made to simulate the shape of a paddle). In those other instances, while we would have preferred proper paddles, we didn’t think much of the buttons. In the Cadillac CTS-V, however, they felt truly out-of-place, and not just in the sense of an expected level of brand quality—the buttons were literally placed nearly out-of-reach for even our comically large hands. With hands at a relaxed ten-and-two, reaching for the button with the pinky required loosing grip of the steering wheel. With our usual east-west grip, buttons were just within reach of our longest digits. Folks with normal- to smaller-sized hands may need to either lift to shift, or have hands placed awkwardly below the spokes of the steering wheel to easily reach the buttons (not a position we recommend). Alternately, full-time use of the gear lever is an option for drivers fed up with the buttons.

But, that’s a small quibble in the grand scheme of things, particularly when the grand scheme happens to be a 556-horsepower luxury sports sedan with good looks and a great ride. Small only until one begins to explore the capabilities of the transmission. After managing to hit the button to upshift, the driver can expect to wait to the count of “one Mississippi” for the gears to swap. By that time, thanks in no small part to the curtness with which the engine revs through the low gears, one may often find the tach needle bouncing off the 6200-rpm limit. After some time, we found ourselves getting used to the predictable nature of the power delivery, and were able to click to shift in advance of actually wanting to shift, allowing us to minimize such frustrations. Still, the lag is more than one should expect to get used to in an otherwise outstanding performer like the CTS-V. Our advice: put the lever into sport mode, then leave the shifting up to the machine, particularly if trying to reproduce Cadillac’s claimed 3.9-second 0-60 time.

Or, simply opt for the six-speed manual.

Despite our gripes about the automatic transmission, from our experience with the 2010 CTS-V, we had trouble prying our hands from the steering wheel. This is one driver’s car we would definitely include in our dream garage—that is, until we get some seat time in the market-bound CTS-V coupe.