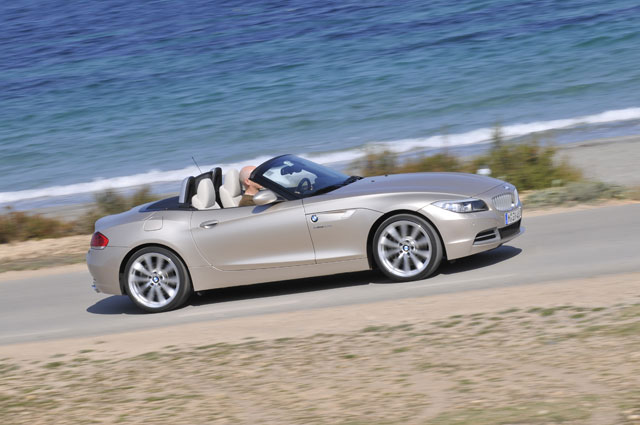 Two market segments in particular have been decimated by the Great Recession. First, the Bentley-Ferrari-Porsche 911 area has effectively been castrated in the past six months. Second, there are the smaller two-seater premium Euro roadsters we all love so well in the best of times: Porsche Boxster, Mercedes SLK, Audi TT Roadster, and BMW Z4. For these little guys, emasculation similes do not suffice.

BMW has slightly merciful timing on this new Z4. The last-generation coupe and roadster stopped production in Spartanburg right as the collapse was preparing to crush us all in July 2008. Now the new generation Z4 is cranking up in Regensburg, Germany, for a May 9th worldwide launch of deliveries just as a few signs are popping up that the start of the long bottoming-out could be upon us, bolstering at least a little confidence.

And we can all say bye-bye to the costly soft top and fixed top versions approach, since Munich decided a while ago that a folding hardtop covers all needs in this minor profit center segment. For this quickie drive review prior to the full story in next month’s Winding Road, we’ll focus on the key driving points and personality of the third-generation Z4 — called the E89 internally by BMW.

Seeing the previous two Z4 roadsters sitting beside this new one pretty much tells the full story on how the car has altered its persona. In a modern way, the profile of the new Z4 is as beautiful to our eyes as that of the classic 507 or short-lived Z8. The proportions are classic rakish Euro roadster with a clamshell-opening aluminum hood that is 5.5 inches longer than that on the last-gen Z4s. To the eye, this positions the two occupants much more to the rear axle though the wheelbase remains the same. Then, given the packaging needs of the two-piece aluminum folding top, the shape of the rear end is raised a bit and it’s this line that ties it so closely to those classic proportions.

Then the front and rear ends are wider with light elements that emphasize this added width, a visual trick that is all the rage these days at every German builder. Thus, stared at from above, the footprint of the latest Z4 is basically rectangular as on most of the roadster bodies we lust after.

Inside, the form language carries over and everything is a little more generous and elegant than on the previous cars. Cockpit shoulder room is up almost an inch, elbow room by almost two inches, and these touches resolve one of the Z4’s old troubles: we felt hemmed in before and so the Z4 was never the choice for a longer distance drive. This one stretches out a bit and matures up, thus attracting a different, possibly older, customer with more cash to play with. (The sDrive30i starts at $46,575 pre-tax with standard six-speed manual, the sDrive35i at $52,475.)

The only testers available in our Spanish try-out were top-of-the-line sDrive35i models with the new seven-speed dual-clutch Sport Auto transmission, though we did manage a quick try in a manually equipped 35i for you. Both are terrific to be sure, but with the seven-speed we are miffed by the automated upshifts close to the 7000-rpm redline even in the Sport+ mode of the Drive Dynamic Control and kickdowns whenever we jam on it for overtaking. This is a safety choice by BMW and it states clearly that this Z4 even at the top end is now meant for average drivers. Still, if you don’t mind anticipating the ECU police by 100 rpm or so, the shifting is swell and the exhaust sound is burly without being brash.

Playing with the new DDC — normal, sport, sport+ — also modifies the suspension and steering and the differences are more subtle than any previous mode system, but Sport+ is our overall choice especially if we find ourselves on these sensational roads above the Andalusian coast.

Our other favorite mode is roof down. The two-piece hardtop weighs 66 pounds more than the old ragtop, takes twenty seconds to open or close, and thankfully looks really good either open or shut.

Now, stay tuned for the full Z4 test report in the next issue of Winding Road.