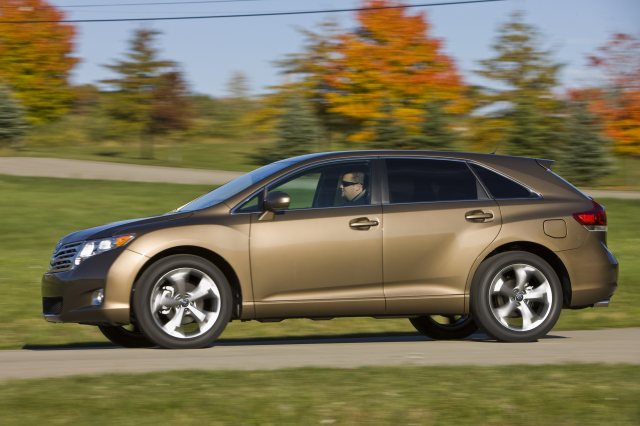 When any manufacturer, but particularly an industry titan like Toyota, rolls out a new vehicle that they say is “in a new class”, well, the hairs on any journalist’s neck stand up a bit. That was certainly the case as we listened to Toyota’s executives and engineers roll out the new Venza.  But after a couple of days of driving it, talking to Toyota about it, and reviewing the data, we think they have a point. It’s a subtle point, but a point nonetheless.

You’ll notice that so far we haven’t said what the Venza “is”.  We haven’t put it in a category. Before we discuss the category the vehicle belongs in, we invite you to do the same experiment we performed with some of our colleagues at the launch.  Take a good look at the pictures of the Venza. What would you say this is?  Just for fun, make a mental note of that, so you can compare your reaction to what a group of journalists said in response to the same question.

Of course, at some level it really doesn’t matter how the Venza (or any other vehicle) is categorized. The problem with categorization is that is makes it hard to see new things. If the iPhone is just a “cell phone” then it is hard to understand how different it is. A rational person might note that the world hardly needs its 829th cell phone and move on. But if you have an iPhone or have played with one, you know how vastly different it is and you know it isn’t just a cell phone. The category no longer matters when you’ve experienced reality.

And the reality of this Toyota is rather appealing, if you’re in the target market, because the Venza actually breaks with Toyota tradition in some fairly important ways.

Not Your Mother’s Toyota

Let’s start with driving dynamics. Just let that phrase wash over you for a moment. We’re at the start of a Toyota road test and we’re talking driving dynamics, rather than leaving it ‘til the end where hopefully no one will notice. At the opening launch dinner, Toyota execs brought up the need for good steering feel—without prompting. We almost passed out. Always a serious and sincere company, Toyota has made a serious and sincere effort to make the Venza fun to drive.

We took a V6 Venza AWD around a 20-mile loop of Pennsylvania mountain twisties at pretty close to full chat and came away impressed.  First off, roll control is quite good. Actually, a lot of taller vehicles have some pretty hefty anti-roll bars attached so that may not seem exceptional, but there are several things to like about the Venza in this department.  Unlike many SUVs, the Venza stays fairly flat as you push it (in contrast to, say, a Range Rover which initially resists roll, but as the cornering forces rise can’t resist tilting more and more). To maintain a decent ride, we noticed that the Toyota has only moderate roll damping (the BMW M3 takes a similar approach) but switchbacks are handled well, with minimal sloppiness.

The Venza’s handling is also nicely balanced front to rear—though it does tend towards understeer—and it feels happy carving through curves. Since the Toyota is lower and lighter than most SUVs or crossovers, you can feel physics helping (or at least not hurting). Let’s be clear though, the overall sense given by the Venza is that it is well-mannered, not that it is exciting or involving.

We also drove FWD Venzas, with both the I-4 and V-6 engines, which handle in much the same way as the AWD model. The I-4 feels a little lighter, affecting the ride quality more than handling, with the V-6s being a little smoother. The FWD vehicles want to understeer just a tad more than the AWD, but one would have to drive them back-to-back to notice.

Venza’s ride quality is pleasantly firm, with large swoops and bumps being tracked very well. If Michigan or New York residents ever find out how smooth southwestern Pennsylvania roads are, there will be a riot. As a result, we can’t be sure about how the Venza handles the tragedy of typical urban roads. We did run two of our testers onto the shoulder multiple times in search of fragmented pavement and noticed very little ride harshness, which bodes well for commuter use on patchier pavement.

Performance is more than acceptable as well. The 268 hp V-6 feels strong and unstressed even in low-altitude mountains with a couple of passengers on board. Toyota has done some fine work on the six-speed transmission to make its shift points different for uphill or downhill runs, and we liked the relative lack of hunting for gears.

But Will It Do the MPG Dance?

The Venza’s V-6 is a fine engine, but with fuel economy on everyone’s mind, the I-4 is the big news. This new four cylinder is the key to Toyota’s intent of creating a vehicle that breaks with SUV and crossover tradition in fuel mileage. And, it does deliver better fuel mileage, as you would expect. Toyota estimates that EPA ratings for the I-4 will be 21 city and 29 highway in FWD form (take off 1 mpg for AWD), and the V-6 should come in at 19/26.

Whether 21/29 is enough better to capture buyer’s attention will remain to be seen. In all the hysteria of $4 gasoline consumer expectations about gas mileage have skyrocketed. While 24-25 mpg combined is actually a pretty good number, we suspect it will only inspire folks who are actually in showrooms or on the web comparing what is possible. Breaking through the 30 mpg barrier will await a possible hybrid version. Toyota won’t say a hybrid is coming, but the Venza is derived from the same architecture as the Camry, and there is a Camry hybrid, so it isn’t hard to imagine a Venza hybrid in a few years.

The second area where the Venza departs from Toyota tradition is in its design. Before our drive we grabbed a cup of coffee in a vain attempt to overcome a time zone shift, and stumbled, half-asleep, over to the technical presentation. On the way, Toyota had set up a Venza, and it was our first sight of the vehicle. Honestly, our first thought was “what the heck is some new Infiniti doing here?”  Somewhere in our intuition, the Venza clearly registers differently than Toyotas of the past.

Our second thought was “that looks pretty sharp.” Beauty is in the eye of the beholder of course, but we’d say the majority opinion at the launch was that the exterior of the Venza was very well executed.  Almost every angle of the vehicle looks carefully shaped.

Interior materials are similarly attractive and definitely not grabbed at random from the Toyota parts bin. We think this is a big step forward, as Japanese interiors over the past years have slipped behind not only the European but often the Americans.

More important than how the design looks though, is how it “reads”.” Is the Venza big or small? Rugged or stylish? Youthful or conservative? In these times of shifting automotive priorities and tastes, these factors will probably have a lot to do with whether the Toyota succeeds and whether it appeals to you.

And that read is pretty hard to tell from pictures, one has to see it in person. We noticed that the Venza doesn’t come off as an SUV, being a bit too low and sleek. It could almost pass for a station wagon, except that it seems more stylish and muscular than most sedan-derived wagons. It doesn’t look tall, like some crossovers, despite having 8 inches of ground clearance.  It is basically the same length as a Camry, so it doesn’t seem small, but it isn’t big either. Frankly, if you want a true four-passenger vehicle that’s practical and looks politically correct, but not so boring, conservative, or downscale as a sedan or hatchback, we think the Venza will seem “just right” (apologies to Goldilocks).

Of course, for all the talk of the Venza being different from past products, we shouldn’t forget that it is in fact a Toyota. That means that some serious thought has been put into passenger comfort, ergonomics and features.

Seat comfort in the Venza is very good, with nicely firm, reasonably cosseting cushions.  The fabric is attractive and substantial enough that one doesn’t have to opt for leather to get a decent seat.

Toyota’s engineers have put an impressive effort into the ingress and egress aspects of the Venza. The seat height has been optimized to use minimum force from your legs. Engineers put force sensors on real human legs and found the height that minimized muscular output. Any higher or lower seat and it would take more effort to get in or out. No kidding. We tried it and it seemed to work. They also worked on the sill shape to make entry/exit easier and cleaner.
This seat height, coupled with ample glass area, makes sightlines pretty good. The A-pillar intrudes a bit in the front, and some will want an even taller vehicle, but the Venza will suit many drivers who place a premium on visibility.

The rear seat is also well done, placed farther rearward than in a sedan like a Camry, and giving the Venza excellent rear legroom. The slight higher than normal roof, along with a flat roofline, allows for excellent headroom. The two-panel sunroof also increases rear headroom with the sunshade open, because there is no headliner in the second row.

Available option packages deliver most modern gizmos. Two newish options on offer are automatic high beam headlights and Bluetooth music streaming. Even one doesn’t get the rather mediocre JBL Synthesis surround sound system with Bluetooth streaming, there is an auxiliary in jack for your iPod or other music player (but no interface that integrates with the in-dash display).

Pricing for the Venza starts at $25,975 for the four-cylinder FWD version. At the other end of the spectrum, the V-6 AWD has an MSRP of $29,250. See the NextAutos Buyer’s Guide for more details on options and pricing.

So What the Heck Is It?

By now you may think we’ve forgotten our little experiment (what do you think the Venza is?); we haven’t. Here’s what our informal poll of journalists at the Venza launch said:

We think it doesn’t really matter. One guy summed it well: “This is a vehicle I could actually see myself buying”.  We can see a lot of people saying that.

The V-6 comes out in December, followed by the four cylinder in January.