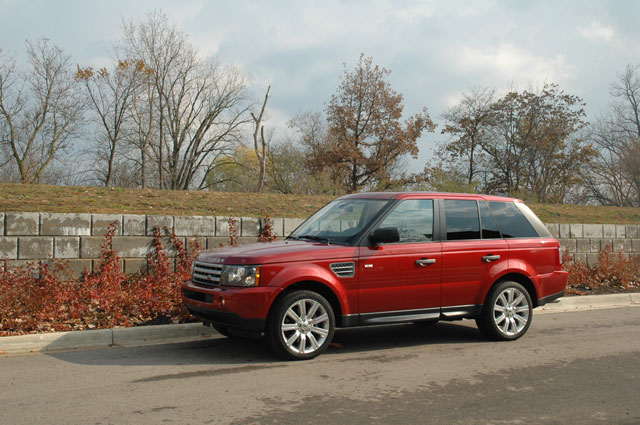 The Range Rover Sport is a vehicle that can go anywhere, do anything, and look trendy in the process. No, it’s not going to win any awards in within the Green crowd, but for the consumers who actually pay out for one of these (especially in Supercharged trim), it won’t matter. In our week with the Range Rover Sport, we found it to have more than ample performance, relatively good handling (for an SUV), and a pretty luxurious interior.

Our Range Rover Sport was my motor voter carriage for this year’s election. As I didn’t receive my Ohio absentee ballot as requested weeks prior, I faced a 170+ mile drive or risking disenfranchisement. I chose the former, and the Land Rover helped make it an easy decision to live with.

I have an irrational love for several Landie products, and this Sport is one of them. I think their rectilinear styling still looks sensational, and having taken-in a couple of Land Rover schools, their off-road prowess is remarkable stuff, even with the Sport’s big, low-profile tires that would seem to indicate otherwise.

I like the pace and noise of the supercharged model, but handling and mid-range quickness probably isn’t as special as it ought to be for something called “Sport.” Although I have trouble stomaching the idea of a road-biased Land Rover, I could see something like a luxury pre-runner rally truck holding great appeal. As it is, the only reason I called upon the various off-road gubbins was to dial up the air suspension to max height so that I could see over other cars in a dead-stop two hour traffic jam.

If the Sport hasn’t dated on the outside, it’s starting to get on a bit inside. The center stack is a tangle of too many buttons, the nav system feels a couple of generations behind, and the separate audio controls feel antiquated because of the too-small and pixilated display. It’s all easy enough to use when you get a few miles under your belt, but it would be nice to have a cleaner layout, crisper switchgear and a better looking nav interface.

All-in, the Sport is still a very attractive package, but newer generations of its more tarmac-oriented competition are starting to make this Landie a tough sell, soft spot or no.

Generalization or not (mostly it’s not): This is the thing you see most often in Southern California, or in the well-heeled ‘burbs of many an American metropolis. It’s become something of a uniform for an entire aggregate of the upper class. We admit that we look longingly at each when they zoom past. There’s something incredibly special about that Land Rover shape in a sportier example.

While the RRS might look the part of a fast, low-to-the-ground SUV, it’s really not all that you’d hope for as driving tool. Since it’s LR3-based, it comes equipped with the sort of mountain-managing software and hardware that gives it the classic (and some might say unnecessary in this example) groans and friction of a Land Rover. We appreciate the abilities built within, but we still feel they’re immaterial here. Who wouldn’t opt for a 500-pound (just a guess, mind you) savings in weight to make way for some serious on-road refinement?

Land Rover doesn’t happen to have a hard time selling these, but we wonder how much better off they’d be if they truly made a performance on-roader. It might not be worth it today but we can imagine it would create a more rewarding experience for owners, which could increase future sales. The reality of the RRS today is that it’s outclassed by BMW’s X5 and X6 in terms of refinement when, in promise, it shouldn’t be.

The Range Rover Sport has to be my favorite Land Rover. The fact that a vehicle this size can obtain 0-60 times around seven seconds is quite impressive, though not all SUVs have supercharged V-8 engines which produce 390 horsepower and 410 pound-feet of torque. Digging into the gas pedal allows the supercharger to do its dirty work with a slight whine coming from the engine, and no matter what gear you’re in, there’s never a lack in available power.

An unsettling bit of my drive came when I decided to try out the Rover’s manu-matic transmission setting. Moving the shifter from “D” to “+/-” felt very stiff backed up by an awful “CLUNK” sound no matter how many times I shifted between the do-it-yourself and fully automatic modes. Another staff member alerted me to some sticky goo that seemed to have worked its way into the shift gate, so I’m hoping that’s the only reason why such an unpleasant sound would be made. Once in manu-matic, though, the shifts were executed rather quickly, especially under harder driving situations. It’s an interesting feeling to have crisp DIY shifts in a 5764-pound SUV – pretty cool stuff.

The Range Rover Sport is indeed a niche vehicle, since the high price tag and poor fuel economy don’t sit well with most consumers. Still, I’m always surprised at how many of these I see on the road.

It feels weird to be in something so massive that’s so quick and handles so well. You can rattle off 90mph in this thing and it feels like nothing. All around visibility leaves me with no major complaints, but there was always a sense that there’s something hiding in an undiscovered blind spot. To that end, high speeds on crowded highways left me a bit uneasy. The interior is comfortable and functional, and the barrage of LCD lights and buttons on the center console has kind of grown on me. Girlfriends also have some inexplicable affinity for Range Rovers, which can be useful knowledge. All this said, the only thing that made the Range Rover Sport truly enjoyable for me was that this was a test car. With Consumer Reports ratings near rock bottom for reliability and at the cost of some homes, I wouldn’t put any of my own money behind it.