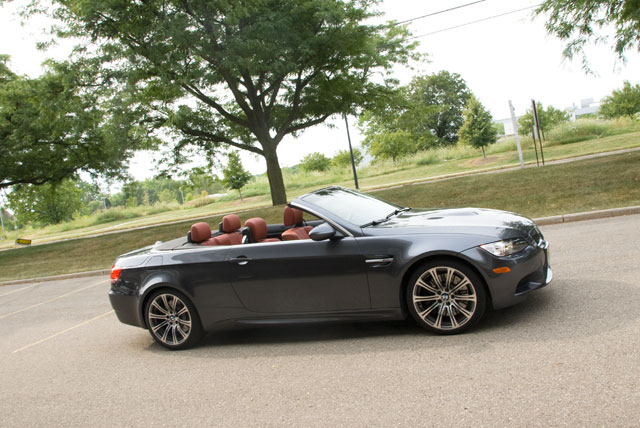 Now that we’ve tested the BMW M3 Coupe and Sedan, it’s time to round off the M3 lineup with the hardtop convertible. While we were quick to proclaim the Coupe and Sedan as fantastic automobiles, we’re having second thoughts about the cabriolet. Many of us have qualms with the folding hardtop and even though BMW has re-engineered their dual-clutch setup, some of us would still prefer the straight-up six-speed manual gearbox. All in, the M3 Convertible proved to be good fun for top-down driving, but we’re not sure if our M3 love stands true to this model.

Plop, plop, fizz, fizz. So says the age-old Alka-Seltzer advertisement that—if you don’t recall—is easily found on YouTube. Can we change that to pop, pop, rage, rage? It might just describe my experience with the BMW M3 convertible we had in our office, too.

Despite the on-paper advantages of BMW’s old SMG gearbox, I never found it smooth enough for everyday driving. The new dual-clutch, seven-speed in this new M3 is simply called a Dual Clutch Transmission (note how BMW had shed the SMG name, which should go some way toward convincing buyers that it’s completely different from the old unit) and it is a revelation. The beauty of dual-clutch (the SMG was and is not a dual-clutch unit, but rather an “automated” manual) transmissions is that you have two clutches and two sets of gears working together. Essentially one clutch engages 1, 3, 5, and 7 while the other clutch works the even numbers. This creates super smooth transitions between gears, leaving no torque loss between shifts. Just plant your foot and rip through the gears.

Which gets me back to pop, pop. It’s just plain impossible to drive the BMW M3 without shift saturating yourself (or your companion). All you want to do is run up the gears, run down the gears, and generally speaking, shift way more often than is necessary. Why? Because you want to hear it. Pop down a gear. The V-8 is revved and matched to exactly where you need to be. You get that metallic rattling sound that BMW M3 drivers will remember (and naysayers will continue to discount), although we wish we’d hear it a little more. Even in this convertible with the folding metal top stowed we only had about two-thirds of the exhaust note we crave in our everyday lives.

I had cylinder count shock when BMW announced the M3 would have a V-8. M3s are supposed to have inline six-cylinders, right? Previously that was the case, but there’s very little in the way of traditional V-8 “feel” to the M3’s 4.0-liter unit. If you were expecting at-idle rumbling, Chevy small-block sounds, and the type of wide-mouthed roar you might find at a Hot Rod event, guess again. For all points along the M3’s torque curve, you’re going to feel like you’re driving an inline six—albeit a 400 horsepower one.

Overall there is a feeling about this M3 which might leave the E46 (the previous generation 3-series) lover a bit jaded. Road noise, exhaust noise, and overall connectivity to the world around you is kept at bay—perhaps to soothe those buyers who simply wanted a more expensive 3-series, not a racing car. But I, for one, would prefer to have my M without the Alka-Seltzer effect. Maybe a lightweight version of the M3 will do the trick?

I could just cut to the chase by saying that the M3 Convertible is the best BMW I’ve ever driven and leave it at that—but I can’t simply sit on such strong emotions. Everyone has read reviews of the sedan and coupe, and everyone already knows how utterly great both are. Logically, our enjoyment of any half-decent drive is upped exponentially by dropping the top, and the M3 is an exception only in that this sensation is magnified.

With the top down, every visceral treat that the regular M3 has to offer becomes that much more intense. Waiting at stoplights, the manic din emitting from the engine bay kind of envelops you, almost poisoning your thoughts and encouraging you to do things you normally wouldn’t. One green light, three right-finger flicks and five seconds later, and you’re cruising at freeway speeds. Above the 70 mile-per-hour mark, a few flicks of the left fingertips will catapult you well beyond the boundaries of sanity and, despite the wind noise, the engine is still plainly audible. In fact, you can almost sense its delight in hitting the far reaches of the rev band.

On a curvy interchange ramp, I threw the M3 into a twist at upwards of 60mph. Two seconds in, I found myself questioning my better judgment, worried that I’d shatter my pristine press-fleet record and wind up on the grass somewhere in the distance. Thankfully—but not surprisingly—the M3 handled this tire-screecher with the perfect balance of composure and reckless abandon. Enough to make it a thrill, but not so thrilling that you wouldn’t want to do it again.

The seven-speed DCT is one of the first paddle-shifting systems that I truly love and, were I in the market, might actually consider over the standard six-speed manual. Acceleration is uninterrupted and virtually seamless, and though my left foot got a bit bored, the added oomph more than makes up for it. That said, seventh gear is almost unnecessary in this vehicle – unless, for some reason, you care about fuel economy at cruising speeds.

The folding hardtop works fast and, best of all, the pillars create no extra-large blind spots. Visibility is far better than average with the top up, and top down everything is perfect. Nothing about the car gets in the way of our making perfectly calculated lane-changes.

German cars are sometimes characterized as being robotic, overly-precise and unemotional—but the M3 stands in sharp contrast to that stereotype. It’s a profoundly confidence-inspiring drive and an absolute blast that appeals to all five senses. Maybe even a sixth, if you’ve got one.

On the contrary from Nate, I’d have to say this is my least-favorite of the M3 roundup—and I’m always a sucker for a convertible. The coupe and sedan just feel more powerful and generally quicker than this droptop, probably because of the added weight from the retractable roof. Also, while I would only own this car with a proper manual gearbox, the revised dual-clutch setup is quite good and a huge step above the SMGs from previous-generation BMWs, especially the first one that made its way into the E46 M3. Shifts are surprisingly crisp, and the noise that is emitted from the exhaust during aggressive downshifts will make your heart melt. It’s great stuff, but nothing to trump having a third pedal and a stick to stir the gears.

I wish BMW wouldn’t have fitted a retractable hardtop to this M3 because when the top is up (admittedly a rare occasion when I’m behind the wheel), the car just doesn’t look right. If I own a convertible, I want people to know it’s a convertible, even with the roof on. This hardtop business ruins the coupe’s fantastic lines and I’d rather just have a black soft-top.

Another reason why I’d rather have the coupe or sedan? Our M3 Convertible carries a nearly $80,000 price tag simply for the ability to take the roof off. (Yes, there are other useless options added on, too, but that’s beside the point.) I’d gladly pay $20k less, get a sedan, and put all four windows down. It’s that simple. An M3 Touring, though—now that’d be something.