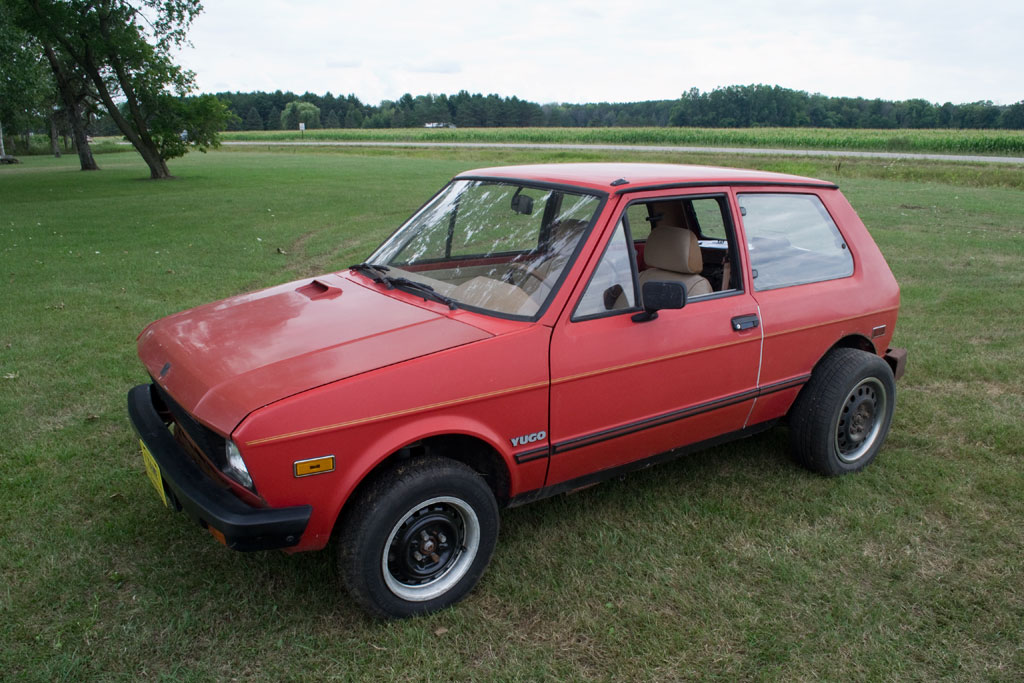 —Applegate, Michigan
This…this is a very, very bad idea. The thing about bad ideas, though, is that more often than not, they are a lot more fun than “good” or “safe” ideas. Bad ideas result in great things like spud guns, human-powered flying machines, flaming tequila shots, and this, a 1988 Yugo GV with a mid-mounted Oldsmobile Rocket 455 V-8.
You may have first laid eyes on this masterpiece a few days back, when a vigilant editor noticed it while slacking off perusing Craigslist. We wrote a quick piece about it, and then thought that’d be the end of it. That is until we realized it was located in Applegate, Michigan, a mere 90-minute drive from your author’s home office. Game on.
[Click here to read our review of the 1974 Triumph TR6.]
We got in touch with Kevin Martin, of Applegate, Michigan, the owner and maniac behind the Craigslist post. Kevin didn’t build it, but he knew a good thing when he first laid eyes on it. It spent some time after its initial build sitting in the woods, but has been since restored to working order under Kevin’s care. Kevin originally bought it for parades, car cruises, and burnout contests. Unfortunately, and despite its small size, he just no longer has the room or the time to devote to it. Even though it’s being sold, we still managed to finagle some time behind the wheel.

Before we get into the drive, a little background. The infamous Malcolm Bricklin introduced Yugos to the United States at the 1984 Los Angeles Auto Show. Sales started in 1985 and lasted until 1991, with a total of 141,000 units sold. Despite this reasonable success, Yugos had a sort of stigma about them that’s lasted until this day. Of course, that stigma doesn’t apply to examples holding Oldsmobile V-8s between their rear wheels.
And what a V-8 it is. Sourced from an Oldsmobile Toronado, it’s a 455-cubic-inch Rocket V-8. In maxed-out W34 trim, it produced 400 horsepower. Standard first-gen, 455 Toronados pumped out 375 ponies, while the early second gens (which we’re guessing this engine is from) generated 350 horsepower. That number gels well with Kevin’s 325-plus-horsepower estimate.
Now, automotive history buffs might be shouting about the Toronado being front-wheel-drive, and this Yugo clearly (look at the rear track) being a rear-drive car. The solution was snatching up the Toronado donor car’s entire driveline, and plopping it in back of the Yugo, transmission (a three-speed auto in this case) and all. The result is a front-drive drivetrain, sitting where the rear wheels of another front-drive car should be. Yes, we’ve just gone cross-eyed as well.
As for the build itself, to call it crude would be a massive compliment. The rear track is actually the front track from the Toronado. The gas tank has been relocated to where the Yugo’s original engine should be. There’s also a radiator up front, which, through witchcraft, manages to cool the engine.
Open the rear hatch, look down, and you’ll see the ground. The size of the engine dictated that there would be no floor. There’s also no separation between engine and driver, and there’s no visible tweaks to the suspension. When we say that someone popped the engine in the back and called it day, we really aren’t exaggerating.
What is it like to drive, though? Loud, hot, terrifying, uncomfortable, and dangerous. Umm, yeah, that covers it. We slotted the automatic transmission all the way back, not knowing where Drive was. There was really no sensation of having ratios on this three-speed slusher, so we can’t even be sure what gear we were really in. The important thing is that the V-8-powered Yugo began to crawl forward.
The steering was powered, but the brakes, oddly, were not. Combine this with a strong idle and it becomes difficult just to keep the car from creeping ahead. Multimedia Editor Chris Amos, easily the smallest member of the Winding Road office, had to use both feet to keep the car still.

Before we crept out onto the main road, Kevin explained that the car becomes rather unstable at around 40 miles per hour. That’s fine, except the speedometer wasn’t working, so we had no clue when we actually hit 40 mph. The other issue was the rubber. In this case, it was a set of well-worn Bridgestone Turanzas. Set up for a burnout contest, grip would be at a premium. That’s not a desirable trait in a 900-pound car that produces well over 300 horsepower. If you plan on buying this thing, invest in a set of good rubber, and budget for more.
At first, the gas pedal offered a lot of resistance, and there was a noticeable hesitation before the engine responded to our commands. Kevin chalked this up to a dirty carburetor. Once we became comfortable with laying into the car a bit more, our courage built. We gave it some more gas and were treated to the sound of an unmuffled, 455-cubic-inch V-8, sitting right behind our right shoulder. We’ve often heard racecar drivers talk about how loud it gets in their cars, and how it’s one of the things you learn to live with. After our short stint in the Yugo, we really know what they mean.
While we could have plodded along, terrified, at 25 miles per hour all day long, we sadly had to return the Yugo. After all, Kevin’s trying to sell this thing, and every moment we spent behind the wheel increased our chance of fiery death exponentially. If you have $2000 laying around, are looking for a way to significantly shorten your life all while having a great time, then we’d strongly recommend you make a trip to Applegate and try this thing out. If you’re interested, get in touch with Kevin, here.
1988 Yugo GV
Engine: V-8, 7.5 liters, 16v
Output: “325+ hp/”
Top Speed: 40 mph (fear limited)
Weight: 900 lb (est)
Fuel Economy: Really?
Base Price: $2000