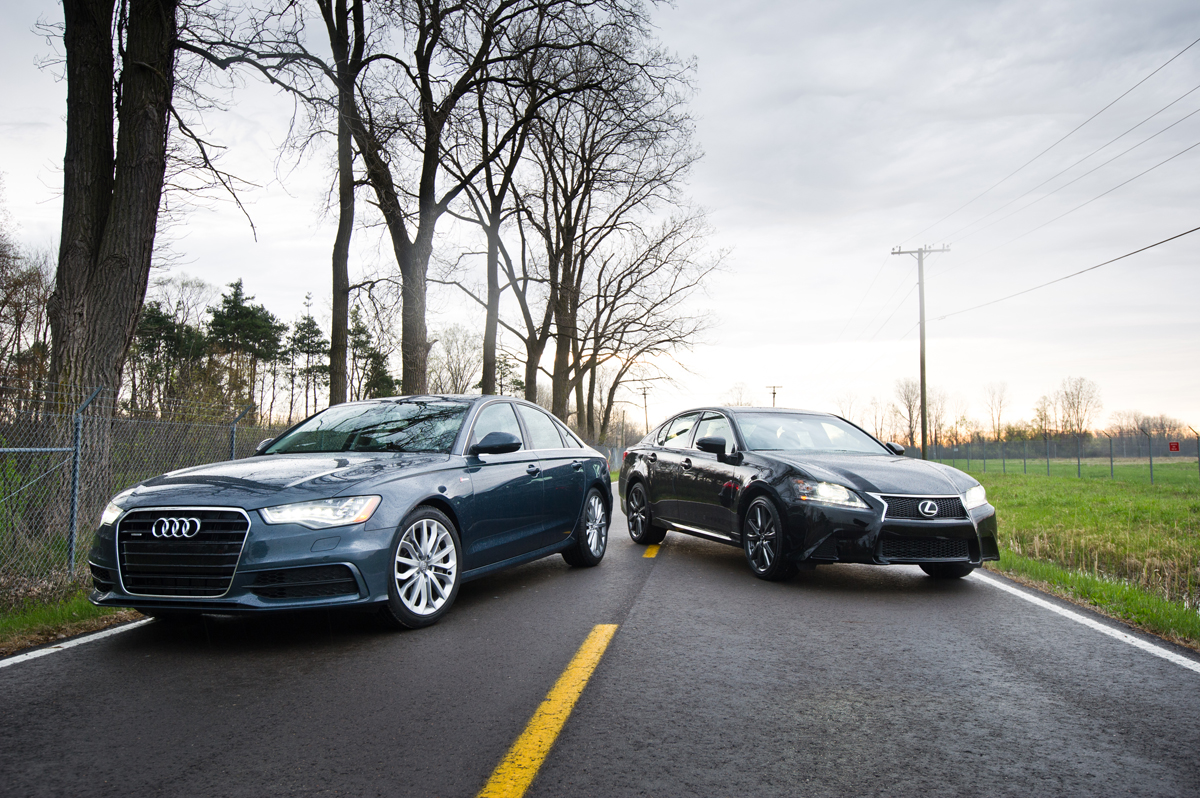 (photo credit: Chris Amos)
—Ypsilanti, Michigan
Take a good long look at the photos accompanying this article. Go ahead, these words will still be here when you get back. There’s a lot to take in, visually, when seeing the 2012 Audi A6 and 2013 Lexus GS paired up with one another. It’s clear immediately that these aren’t boring cars, gods be praised. These are extraordinary sedans. You can see it.
These two cars are worlds apart in terms of appearance. The Audi is stunning. The GS looks great, too, but where the A6 is graceful, sleek, and easy, the Lexus looks focused, hard, and serious. The German is more of a traditional crowd-pleaser, while the Japanese offering is going to attract a driver who means business, and wants to look the part. We’ll let you decide which is more favorable, while noting that we wouldn’t kick either of these babies out of bed.
Inside, the cars both smack of sporting luxury, but in very different ways. The Audi feels more traditional, with a grey and brown interior, with use of wood grain on the dash, doors, and tunnel. It has a country lounge feel to it and is quite a relaxed and homey space. Our tester featured the touch pad next to the gear selector, where we could actually write letters with our fingers to spell out our destination in the navigation system. The multimedia screen rising from the dash when we started the car, along with the two Bang & Olufsen speakers up front, felt particularly special.
The GS’s interior was mostly black, with brushed metal trim where the A6 had wood. It feels a bit more sporting, especially with the shine of the metal pedals. Instead of a touchscreen, the Lexus offered a version of the brand’s computer-mouse-like interface, offering feedback and resistance corresponding to what the display was showing and how it was divided. In all, it requires fewer physical buttons that you can accidentally hit with your elbow than the Audi, with most of these controls behind the gear lever. Really, deciding which is superior is a subjective matter; we’ll just say that the Audi offers a richer interface, while that of the Lexus feels more streamlined. Onward to the good part.
[Click here to read our comparison between the 2012 Audi A8L 4.2 and 2012 BMW 750Li xDrive]

Rumors: Industry Report—TVR To Return With A Diesel Supercar?