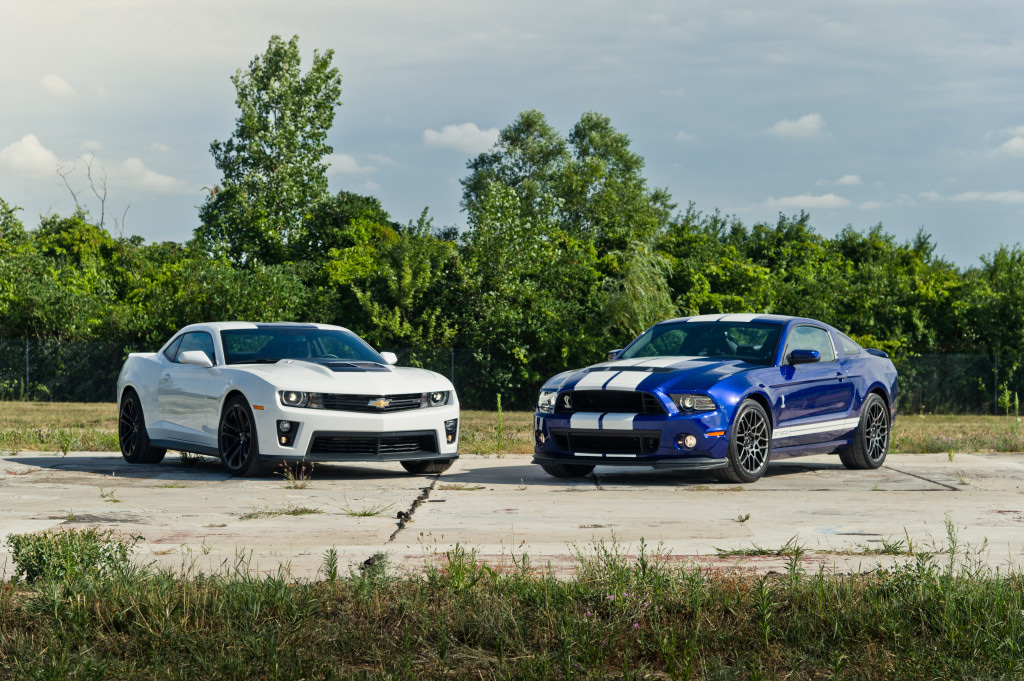 (photo credit: Chris Amos)
—Dexter, Michigan
Building brutally fast cars has never been a problem for Detroit automakers. Since the very earliest days of Motown—hitting its stride in the muscle-car-laden 1960s—the capitol of American iron has churned out pavement burners with clock-like regularity.
Now, building actual sports cars, the sort that play nicely with corners and let their drivers really enjoy the process of piloting them, is a different story. Certainly, those sorts of machines have existed, too, and today’s era of fine car-building by the domestics sees more hits than misses in the sports-car category, but not everything with a big motor fills the bill.
Chevrolet’s Camaro and Ford’s Mustang have, at various times, in many different iterations, fallen into both of these camps. The pony car champs have existed as straight-line monsters, and canyon-carving beasts, though the models do have a richer history of the former.
[Click here to read our review of the 2013 Ford Mustang Boss 302]
What then of these newest, most powerful, and most promising brace of ponies: the Shelby GT500 and the Camaro ZL1? Where do they fit in the pantheon of great Detroiters, of muscle cars, and of driver’s machines?

The truth is, Winding Road readers being savvier at this guessing game than your average automotive-interwebs reader, that you probably already know the answer. In their current generations both Mustang and Camaro are far from the badly braked, wooden-steering-equipped rocket sleds of yore—considerably better even than the models that immediately preceded both of them. Neither is a pure driver’s car, in any form (though the Boss 302 comes very close, we’ll admit), but both cars, at their core, are better equipped for winding roads than their antecedents could have hoped for.
What’s more, it’s fair to ask, in light of the massive engineering muscle that has gone into both of these halo models, if either are worthy of being held up to the standards of the sports car world. Sure, you can always make an argument—with MSRPs that start at under $60,000, and more than 1200 horsepower combined—that there’s performance bargain enough here to do without the nitpicking over the finer points of feedback and involvement. But, we’d like to take the position that cars as fast and capable as this Chevy/Ford tandem, had better offer pretty great controls and handling, at least, lest their unsuspecting pilots drive them where they shouldn’t go (like off at the hairpin).
Diving in to the tale of the tape (which many of you can repeat from heart by now), it’s clear that the Shelby should be the winning car, right off the bat. Chevy offers a 6.2-liter pushrod V-8 with a supercharger, 580 horsepower, and 556 pound-feet of torque; Ford counters with a 5.8-liter V-8 with dual overhead cams and 32 valves (shock, horror, delight!), adds a supercharger of its own, and trumps with 662 horsepower and 631 pound-feet of gut-busting torque. Both cars are about the same size (the ZL1 is a tad lower, wider, and longer), but the GT500 is almost 300 pounds lighter than its rival. The Ford stickers for about $1300 less than the Chevy—finishing off the on-paper smack-down that should shut up your Silverado-driving buddy at the bar, and his Calvin-on-Ford-logo window sticker.

Paper arguments work well in the face of zero experience, which is why they let us drive the cars, we suppose. And it’s in the drive that the Camaro ZL1 starts to quickly make up for ground lost to the spec sheet.
Now, we’re not going to do much more than point out the fact that the Camaro is working with an independently suspended rear end, while the Shelby makes do with a live axle—our experience with loads of good-handling Mustangs tells us that the farm-age technology out back can still proffer fine handling. But there’s no getting around the fact that the ZL1 is a much tighter handling car than is the GT500.
Around our favorite test loop, with its ultra-tight-radius corners, broken asphalt, and elevation changes, the Camaro routinely proved both more agile and better riding than the other car. The more softly sprung Ford moved around too much at the apex of corners with a full load of gees in its side pocket, with the same kind of float at the top of the suspension travel that we’ve been bemoaning in V-8 Mustangs for years now. Pushing its advantage, the Camaro wanted to turn-in faster than did the duller Mustang, while simultaneously offering a far higher sense of balance mid-corner. In the ZL1 we felt far better able to maintain a fluid, natural line from corner to corner as we strung the turns together. Not only was the ZL1 better at this exercise than its comparo partner, it was just very good at cornering on an absolute scale.
Compounding this experience is the fact that the Camaro has a good deal more tactility via its steering wheel than does the Mustang. Neither cars are what we would call “telepathic” in terms of feedback, but the ZL1 is better enough that the GT500 feels quite filtered by way of comparison. The Shelby’s tires are plenty communicative when we mash the throttle from a standstill (when they scream like a Soundgarden outtake), but don’t like to telegraph a message to our fingertips when we’re rounding a quick left-hander.

Now, driven on its own, we would never go so far as to call the GT500 a “bad handling” or “disconnected” vehicle. Whether on a track or on a riverside road, the Shelby offers a ton of fun when the going gets curvy. But driven back-to-back with the Chevy, it felt kind of nose-heavy, and awkward, and wooly on our route—to say it plainly.
You, car-genius reader, may have guessed all of that already, right? You expected us to tell you that the Camaro is the better handling car, and then strike a blow for the Blue Oval when it came time to discuss powertrains, and Shelby’s hellfire motor. And, naturally, the Ford feels quicker a lot of the time than does the Chevy—packing as much power as the total output of our Evo vs. STI comparison tends to do that for a car.
But the real truth is that, at least on public roads instead of your local track or drag strip, the ZL1 feels just about a quick as the GT500 does. The Shelby will get up and move faster from a standstill—a feeling which is borne out by the GT500’s 3.8-second 0-60 time versus the ZL1’s 4.3-second sprint—and definitely pushed us back in our seats harder when we dropped the hammer from freeway speeds to triple digits. But again, when we were focused and really trying to lay down power out of corners, or in the stretches of straight road that tend to be fewer and farther between on good driving roads, the extra power of the Shelby was all but mitigated by the sweeter moves of its primary competitor.
Use of the primary controls for each powertrain—accelerator, clutch pedal, and shifter—was slightly more intuitive in the Camaro, as well, though this point was more hotly debated than the rest by our team. The ZL1’s gearbox was easier to modulate confidently, for sure, but some absolutely preferred the heavy-duty feeling of the Ford’s robust clutch and bolt-action shift lever. We’ll offer that the Ford’s transmission felt better suited to the duty of managing heroic levels of power.

Cleaning up the other clear driving impressions: The Shelby had much better visibility than the ZL1. The GT500 also had, pretty definitively, a better (or at least louder) sound system, on the rare occasions when we turned down the orchestral exhaust note, by way of lightening up with our right foot, for a minute or two. (The engine note comparison, for the record, was an argument that stalemated the Winding Road staff, we suggest listening closely to the comparison video we made, and offering your verdict in the comments section. Turn the volume all the way up, thanks.)
And the rest of it, folks, is a big bag of “you buy what you like.” Styling, interior fit and finish, comfort (heh), everyday practicality (heheh); all are matters of taste as far as we’re concerned, and not facts that we can help you with. Add to that the standard boilerplate of “these are both wonderful cars that owners will love completely,” and you’ll get the picture. Frankly, if your biggest dilemma in life is to choose between buying a 580-horsepower Camaro or a 662-horsepower Mustang, we don’t exactly feel your pain.
We’ll just offer you this, as a parting note: The Camaro ZL1 is a better overall car, soup-to-nuts, than the Shelby GT500.
We sure do like driving muscle cars like these, though, way better than we like driving the historic, valuable, stunningly beautiful antiques that lead the way, bad brakes and all, to this great place in pony car history. Now, top off the tank and thank your lucky stars that you were born after your Grandpa.
2012 Chevrolet Camaro ZL1 Coupe
Engine: Supercharged V-8, 6.2 liters, 32v
Output: 580 hp/556 lb-ft
0-60 MPH: 4.0 sec
Top Speed: 184 mph
Weight: 4100 lb (est)
Base Price: $54,095
2013 Ford Mustang Shelby GT500 Coupe
Engine: Supercharged V-8, 5.8 liters, 32v
Output: 662 hp/631 lb-ft
0-60 MPH: 3.8 sec
Top Speed: 200 mph (est)
Weight: 3852 lb
Base Price: $54,200
Tags:
CamaroCamaro ZL1ChevroletFordMustangShelby GT500

Rumors: Model News—Chevrolet Camaro Z28 All But A Sure Thing