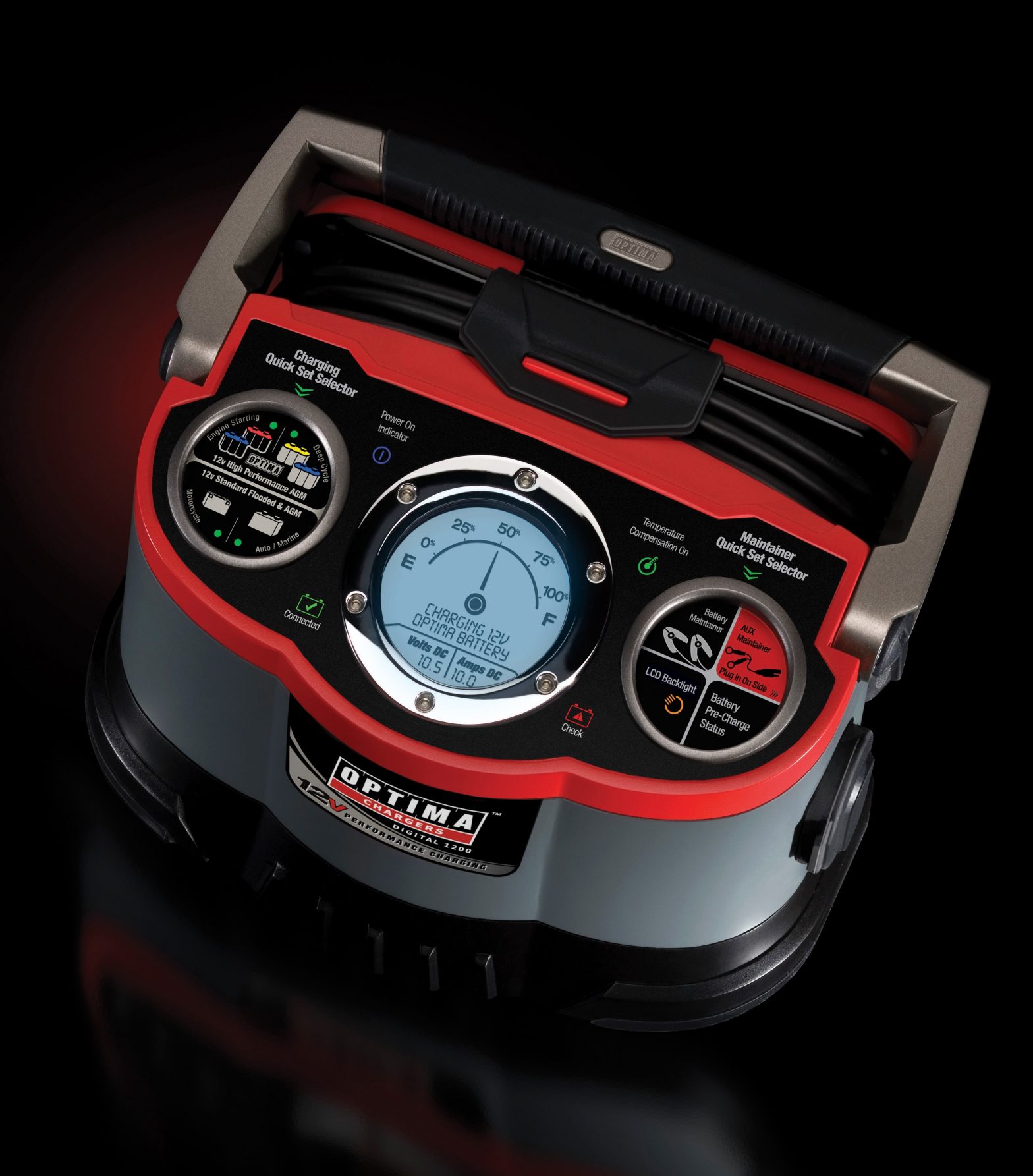 We were recently given the opportunity to test Optima’s new Digital 1200 12V Performance Charger. The Digital 1200 is significant as it’s Optima’s first crack at a battery charger and it has some impressive features and specs. As a division within the world’s largest battery manufacturer, Johnson Controls, Optima has been given access to the resources needed to produce a charger that’s twice as fast as anything else of similar size, or price. The “Performance Charger” name is for serious, folks.

There’s quite a bit of technology packed into the Digital 1200, the charging process is regulated through microprocessors with advanced software unique to Optima, it has reverse polarity protection, spark-free connections, over-temperature protection, and the ability to diagnose battery faults and failures to diagnose and prevent overcharging. The Digital 1200 is capable of fully automatic, multi-stage performance charging, with different modes for conditioning, maintaining, and storage reconditioning. It’s probably not obvious to the average man on the street, but to anyone who knows anything about battery chargers, this thing is the absolute business.

The charger itself isn’t much bigger than a typical car battery and it bears a slight resemblance to Optima’s own RedTop unit. The large, circular LCD display on top of the Digital 1200 shows the battery’s current state of charge and fill rate. It’s easy to read and understand even for the technology illiterate. It’s not difficult to set up, just select the type of battery that needs charging and which set of cords you prefer to use, the buttons are large and clearly marked.

The Digital 1200 is designed to handle charging all the battery types one would expect; cars, motorcycles, boats, snowmobiles, jet skis, and with its auxiliary USB port on the side it will even charge your iPad if needs be. Right next to the USB port is an auxiliary port for vehicles with pre-wired battery maintainer installations, making it possible to charge the battery without even opening the hood of the car. Apparently the Digital 1200 is even capable of charging batteries discharged as low as 1.25 volts—one of the many reasons Optima cites when it claims this is a best-in-class product.

To test at least some of Optima’s claims for the Digital 1200, we threw the world’s most high-tech battery charger at a decidedly low-tech problem: a very old battery powering a much-loved-but-musty 1974 Triumph TR6. (The car is the quasi-property of your writer’s father, and what he doesn’t know about testing won’t hurt him.)

First we tested the Optima’s ability to maintain a charge. We left the charged hooked up to the TR6 for three days, starting with a fully charged battery. At the end of three days the battery was still fully charged, a great start.

To test the Optima’s charging time, we left the TR6’s high beams on for the night to kill the battery. We hooked up the Optima at 8:40AM the next morning and the display indicated the battery had fully discharged. We checked the charge state at 1:30 that afternoon, by then the Optima’s LCD needle had made its way around to 100 percent. The Triumph’s sweet old six-pot came to life on the first crank.

The fact that the Optima can charge a battery didn’t take us by surprise, but the fantastic user interface did; as mentioned above, the LCD screen is large and easy to read, and the unit is so easy to set up it can be done in minutes if not only seconds. We really appreciated the inclusion of integrated LED work lights on the Digital 1200’s clamps, it’s the type of clever design that anyone can appreciate. All of that, coupled with what does seem to be remarkably fast charging times, make Optima’s first-ever batter charger and easy one to recommend.

Optima’s Digital 1200 battery charger is available now for $199.99 and can be purchased through the Winding Road Showroom, or Optima’s own website.