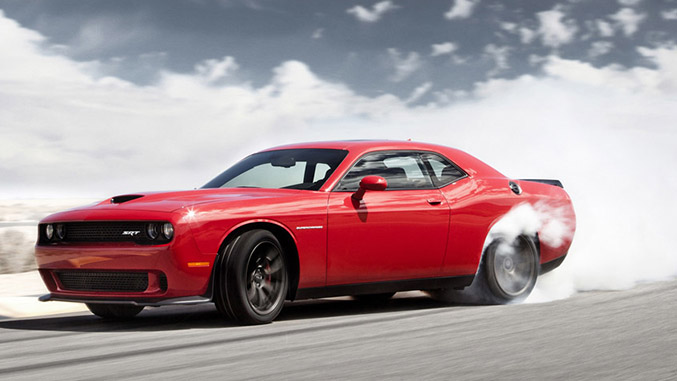 Dodge caused quite a stir among muscle car enthusiasts when they took the wraps off the Challenger SRT Hellcat, the new top-spec offering of the brawny coupe. While the Hellcat boasts massive six-piston Brembo brakes, uprated suspension, a new optional 8-speed gearbox (a six speed manual is standard), and a host of aero tweaks to go along with its refreshed styling, the centerpiece of the model is the all-new, 6.2-liter supercharged V8 engine. But they remained vague about horsepower specifics, only offering "over 600 horsepower" as any indicator of what to expect. Turns out Dodge was being rather coy.

Back when the car was first announced, we mentioned that Ralph Gilles, the center of all things SRT within Chrysler, had alluded to the fact that the Hellcat might spawn an "internal horsepower war", indicating that the horsepower figures might in fact eclipse the 640 on offer from the 8.4-liter V10 installed in the Viper. It seemed implausible, but that’s just what they’ve done:

That figure not only bests the Viper, it also trumps the last-gen Ford Mustang Shelby GT500, the Chevrolet Camaro ZL1 (by more than 120hp), and even the new Corvette Z06, which GM recently boasted as being the most powerful production car in GM’s history.

Of course as we all know, horsepower is only part of the equation when it comes to performance, but if 707 horsepower and 650lb-ft of torque off the showroom floor with a factory warranty isn’t enough to stir some emotion, we don’t know what is. That said, with 275mm wide tires being the maximum (and optional) width of the rear tires, we’re hoping Chrysler also offers a discount for bulk orders of those P-Zeros.

The final piece of the puzzle – the price – still remains a mystery, but Chrysler promises that all will be revealed "over the next month or so". Check out the video and press release below for details on what’s shaping up to be a genuine monster of a muscle car, and don’t forget to keep an eye on the 2015 Dodge Challenger SRT Hellcat overview page for updates as we have them.

Dodge Challenger SRT Hellcat Is The Most Powerful Muscle Car Ever — 707 hp!

The Challenger’s new 6.2-liter Supercharged Hellcat engine is also the first factory supercharged HEMI, as well as Dodge and SRT’s first application of V-8 supercharger technology. For the first time in Chrysler Group history, the all-new 2015 Dodge Challenger SRT with a Hellcat engine comes standard with two key fobs — red and black. The red key fob is the only key that can unlock the full 707 horsepower and torque potential of the Challenger SRT Hellcat engine; while the black key fob limits the driver to a reduced engine output of 500 horsepower.

In addition to the awe-inspiring 707 horsepower of the new Hellcat HEMI, the new 2015 Dodge Challenger SRT Hellcat has been redesigned and totally re-engineered to be the most true-to-form muscle coupe on the market with performance-enhancing technologies inside and out, including the new TorqueFlite eight-speed automatic transmission and an all-new interior inspired by the classic 1971 Challenger.

The 2015 Dodge Challenger and Challenger SRTs are built at the , Assembly Plant and will start arriving in Dodge dealerships in the third quarter of 2014.

The Dodge brand is tearing into its centennial year as ‘s mainstream performance brand, celebrating its 100th anniversary on July 1, 2014. With the purification of the brand and consolidation with SRT, Dodge is getting back to its performance roots with every single model it offers. The consolidated Dodge and SRT brands will offer a complete lineup of performance vehicles that stand out within their own segments. Dodge will be the "mainstream performance" brand within the Chrysler showroom. SRT will be positioned as the "ultimate performance" halo of the Dodge brand, together creating a complete and balanced performance brand with one vision and one voice.