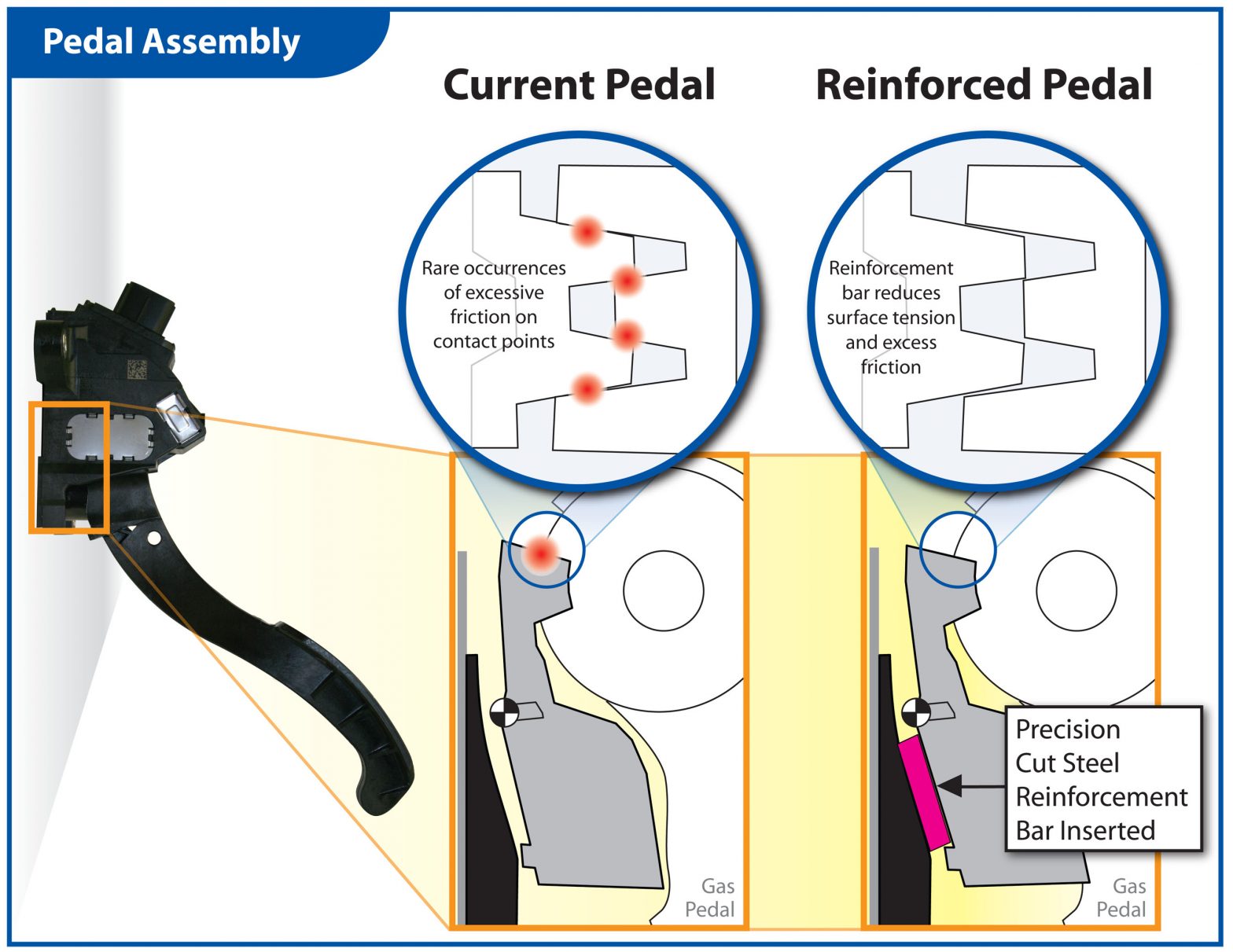 Toyota commented today on the accelerator recall affection eight of its models. The automaker says it has come up with a plan to fix the potentially deadly problem by installing a steel reinforcement bar to reduce friction within the accelerator pedal assembly.

For those Toyota drivers who may experience a sticky pedal between now and when they get the recall work done, Toyota claims that one can overcome the problem with “firm and steady application of the brakes,” before bringing the vehicle to a safe stop and shutting it off.
The recall affects approximately 2.3 million vehicles.
Scroll down through the press release from Toyota for more information.
Toyota Announces Comprehensive Plan to Fix Accelerator Pedals on Recalled Vehicles and Ensure Customer Safety
Rigorously Tested Reinforced Pedals Will Eliminate the Excess Friction that Caused Sticking
Toyota Will Make Concerted Effort to Repair Recalled Vehicles as Quickly and Conveniently as Possible
TORRANCE, Calif., February 1, 2010 – Toyota Motor Sales (TMS) U.S.A., Inc., today announced it will begin fixing accelerator pedals in recalled Toyota Division vehicles this week. Toyota’s engineers have developed and rigorously tested a solution that involves reinforcing the pedal assembly in a manner that eliminates the excess friction that has caused the pedals to stick in rare instances. In addition, Toyota has developed an effective solution for vehicles in production.
Parts to reinforce the pedals are already being shipped for use by dealers, and dealer training is under way. Many Toyota dealers will work extended hours to complete the recall campaign as quickly and conveniently as possible, some even staying open 24 hours a day. The company has also taken the unprecedented action of stopping production of affected vehicles for the week of February 1.
“Nothing is more important to us than the safety and reliability of the vehicles our customers drive,” said Jim Lentz, president and Chief Operating Officer, TMS. “We deeply regret the concern that our recalls have caused for our customers and we are doing everything we can – as fast as we can – to make things right. Stopping production is never an easy decision, but we are 100% confident it was the right decision. We know what’s causing the sticking accelerator pedals, and we know what we have to do to fix it. We also know it is most important to fix this problem in the cars on the road.”
Lentz added: “We are focused on making this recall as simple and trouble-free as possible, and will work day and night with our dealers to fix recalled vehicles quickly. We want to demonstrate that our commitment to safety is as high as ever and that our commitment to our customers is unwavering.”
On January 21, Toyota announced its intention to recall approximately 2.3 million select Toyota Division vehicles equipped with a specific pedal assembly and suspended sales of the eight models involved in the recall on January 26.
Toyota vehicles affected by the recall include:
Certain 2009-2010 RAV4
Certain 2009-2010 Corolla
2009-2010 Matrix
2005-2010 Avalon
Certain 2007-2010 Camry
Certain 2010 Highlander
2007-2010 Tundra
2008-2010 Sequoia
No Lexus Division or Scion vehicles are affected by these actions. Also not affected are Toyota Prius, Tacoma, Sienna, Venza, Solara, Yaris, 4Runner, FJ Cruiser, Land Cruiser, Highlander hybrids and certain Camry models, including Camry hybrids, all of which remain for sale.
Further, Camry, RAV4, Corolla and Highlander vehicles with Vehicle Identification Numbers (VIN) that begin with "J" are not affected by the accelerator pedal recall.
In the event that a driver experiences an accelerator pedal that sticks in a partial open throttle position or returns slowly to idle position, the vehicle can be controlled with firm and steady application of the brakes. The brakes should not be pumped repeatedly because it could deplete vacuum assist, requiring stronger brake pedal pressure. The vehicle should be driven to the nearest safe location, the engine shut off and a Toyota dealer contacted for assistance.
Detailed information and answers to questions about issues related to this recall are available to customers at www.toyota.com/recall and at the Toyota Customer Experience Center at 1-800-331-4331.
How Toyota Will Fix Recalled Vehicles
Toyota has pinpointed the issue that could, on rare occasions, cause accelerator pedals in recalled vehicles to stick in a partially open position. The issue involves a friction device in the pedal designed to provide the proper “feel” by adding resistance and making the pedal steady and stable. The device includes a shoe that rubs against an adjoining surface during normal pedal operation. Due to the materials used, wear and environmental conditions, these surfaces may, over time, begin to stick and release instead of operating smoothly. In some cases, friction could increase to a point that the pedal is slow to return to the idle position or, in rare cases, the pedal sticks, leaving the throttle partially open.
Toyota’s solution for current owners is both effective and simple. A precision-cut steel reinforcement bar will be installed into the assembly that will reduce the surface tension between the friction shoe and the adjoining surface. With this reinforcement in place, the excess friction that can cause the pedal to stick is eliminated. The company has confirmed the effectiveness of the newly reinforced pedals through rigorous testing on pedal assemblies that had previously shown a tendency to stick.
Separately from the recall for sticking accelerator pedals, Toyota is in the process of recalling vehicles to address rare instances in which floor mats have trapped the accelerator pedal in certain Toyota and Lexus models (announced November 25, 2009), and is already notifying customers about how it will fix this issue. In the case of vehicles covered by both recalls, it is Toyota’s intention to remedy both at the same time.
####
Tags:
recallToyota