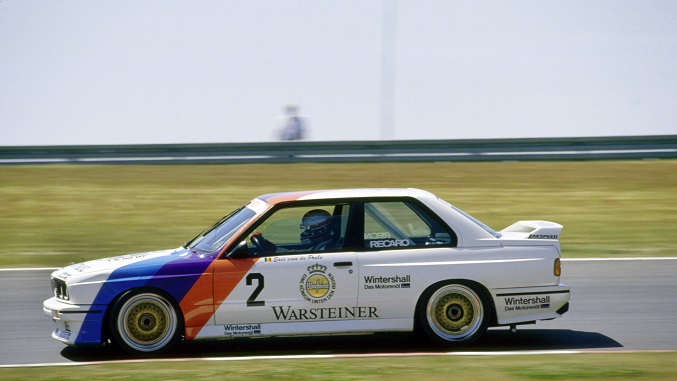 Munich. In August 1985, a rumor surfaced in motor magazine Auto-Deutschland which emanated from a new sports car. An A Group Car from BMW that was a thoroughbred racing car according to the rules but was also to be produced in a version licensed to drive on open roads for everyday use. Speculation about this dream car that could take to normal roads and was intended for the “Most dynamic among BMW 3 Series drivers” was right on target. But the pundits missed the mark about the motor-sport car by a mile on one prediction: They were convinced that anyone who “wants to be a key player in the A Team needs to be turbocharged under the bonnet”. Not true. The BMW M3 had a naturally aspirated engine. And it became the most successful touring car in the history of BMW.

The M3 project was launched just a few months earlier. Production of the M1 mid-engine sports car had already been discontinued for some time and BMW CEO Eberhard Kuenheim commissioned a design for a successor, almost as an aside, according to legend. After one of his regular visits to Motorsport GmbH in Munich’s Preußenstraße he said, almost as he was leaving: “Mr. Rosche, we need a sporty engine for the 3 Series.” His aspiration was in good hands. Motorsport GmbH with its managing director of technical development Paul Rosche had demonstrated its expertise with the legendary 5 Series saloons driven by M engines as well as developing the Formula 1 turbo engine that powered Brazilian Nelson Piquet to win the World Championship in the Brabham BMW in 1983.

The new 3 Series engine had something in common with this: the crankcase. It originated from volume production and actually formed the basis for the two-liter engine with four cylinders. Four cylinders meant less weight and high torque, an ideal platform for a sports engine in the projected displacement class. Naturally enough, the series four-cylinder engine was much too tame for a sports engine. A comprehensive power boost was called for in order to turn the plucky daily workhorse into an athletic and sporty power unit. The BMW design engineers increased the displacement to 2.3 liters and applied a formulation that had already achieved significant successes over a period of many years: four-valve engineering. There was also another reason for the decision to opt for a four-cylinder engine and not adopt the six-cylinder engine introduced in the BMW 3 Series. The longer crankshaft in the big engine started to vibrate much earlier than the shorter four-cylinder shaft. The design engineers therefore designed the crankshaft drive of the BMW M3 with sufficient torsional stability to achieve 10,000 revolutions a minute and more. By comparison with the four-cylinder engine installed in the series vehicles, this represented an increase of more than 60 percent.

Paul Rosche recalls: “We started work immediately. One advantage was that the big six-cylinder engine originally had the same cylinder gap as the four-cylinder engine. We therefore cut two combustion chambers off the four-cylinder head of the M88 and bolted a panel over the hole on the rear side.” This meant that the new four-cylinder engine had a second forebear. The six-cylinder engine that had initially created a sensation in the M1 and had meanwhile transformed the M635CSi into one of the fastest coupés in the world. Paul Rosche: “Whether you believe it or not – we had created an outstanding four-cylinder engine for the 3 Series within the space of two weeks. Under the development name S14, this engine was to generate headlines in sport and in volume production over the years to come. One Sunday, I drove to von Kuenheim’s flat and gave him the car for a test drive. When he came back he said: ‘Good, I like it.’ And that’s how the M3 came into being.”

Contrary to the situation with the mid-engine sports car, the BMW M3 was not going to be crafted by hand in small batches. This car was to be produced as a mass-production automobile on an assembly line. It was destined to compete in near-production touring car motor sport, or more precisely as a Group A racing car, defined as a “production car”, of which at least 5,000 units have to be built within the space of twelve consecutive months in accordance with Annex J of the international automobile sport regulations.

However, many of them immediately disappeared again into garages and workshops to be given a new outfit. After all, the M3 had been designed as a racing car, and this was the time to prove that it really could “race”. A World Touring Car Championship was held for the first time in 1987. And that was exactly what the M3 had been built for. But not quite in the guise in which it was seen on the streets. Instead of 200 hp, the 2.3 liter engine delivered up to 300 hp at 8,200 rpm in the racing version. This put it on a par with the BMW M635CSi. BMW didn’t line up on the starting grid with its own team but supported a number of famous racing outfits like Schnitzer, Linder, Zackspeed and Bigazzi. Drivers like Markus Oestreich, Christian Danner, Roberto Ravaglia and Wilfried Vogt took the wheel, and Annette Meeuvissen and Mercedes Stermitz were the first women drivers.

The first race for the 1987 World Touring Car Championship started in Monza on 22 March 1987 – and ended with a sensation. All the M3 cars were excluded from the placings. The vehicles were checked under chaotic conditions and disqualified because of sheet-metal thicknesses that were allegedly contrary to the regulations. BMW appealed but the sports tribunal decided that the appeal had been lodged too late. There was no longer any talk of infringements of the rules. All the brouhaha naturally didn’t have any effect on the result of the championship. At the end of the season, Roberto Ravaglia was standing on the podium as the first World Touring Car Champion. But that was only the pinnacle of the success list. Wilfried Vogt took the title of European Champion. Altfried Heger came in second – both driving a BMW M3. In 1987, the German Touring Car Championship (DTM) also went to the new BMW M3, with Eric van de Poele behind the wheel. Moreover, the most sporty 3 Series car was also winning competitions off the race track. An M3 crossed the finishing line in first place in the Corsica Rally and secured a victory for BMW after a gap of 14 years in a race for the World Rally Championship.

In 1988, the BMW M3 continued the success story and took the national titles in France, England and Spain. In the following year came another victory in the German Touring Car Championship (DTM), this time with Roberto Ravaglia in the driver’s seat, alongside wins at the national championships in Belgium, Holland, France, Italy, Finland, Spain, Sweden and Yugoslavia. Meanwhile, the displacement had been increased to 320 hp and the BMW M3 drove the competition into the ground. Belgian driver Marc Duez battled his way through the Monte Carlo Rally with an M3 and took eighth place as best driver in a car without a four-wheel drive. The sensational one-two victory in the 24-hour classic on the Nürburgring crowned this series of successes in 1989 with the driver combinations Pirro/Ravaglia/Giroix and Heger/Grohs/Manthey.

Playing with displacement: the right engine for each race.

The M3 had a commanding presence on the international touring car racing scene for five years. It became the most successful touring car of all times by winning the two champion’s titles in the European Touring Car Championship and twice in the German Touring Car Championship. There were also numerous further victories and championship wins at international level. Depending on the competition rules, the four-valve engine had to be adapted to national regulations. For example, the capacity for England was limited to 2 liters while for Germany and France it was raised to 2.5 liters with effect from 1990. This enabled the four-cylinder to deliver up to 355 hp. In the version with the biggest capacity, the engineers of BMW M GmbH went up against the limits of what was feasible. In order to make full use of the 2.5 liter limit, they not only increased the stroke of the 2.3 liter unit from 84 to 87 millimeters, but also increased the cylinder bore from 94 millimeters to 95.5 millimeters. This reduced the width between the cylinders to just 4.5 millimeters. But success proved the development engineers right. The engines withstood the stresses and strains of touring-car racing even at maximum output without any problem.

The year 1992 saw the birth of a completely new M3, this time with an advanced six-cylinder engine. Once again, Motorsport GmbH developed a version for competition in record time. In April 1993, the new M3 was due to line up at the start of the first race for the German Touring Car Championship (DTM). But due to discrepancies in the new regulations, BMW changed its strategy and instead set up a BMW M3 GTR in the striking design of a starting flag and entered the Warsteiner ADAC GT Cup organized by the German Automobile Association. The six-cylinder now generated 325 hp, the car weighed 1300 kilos in accordance with the regulations. A strong BMW team lined up at the start with Johnny Cecotto and Kris Nissen, and Cecotto ended up taking the championship at the end of the season. However, this was the end of the motor-sport chapter for this M3 GTR for the time being. Changes in the regulations meant that the potent 3 Series had no realistic changes of victory any more.

The BMW M3 GTR: the most powerful M3 ever.

BMW only returned to motor sport as a works team with a BMW M3 seven years later. In 2001, the first starting flag came down for the new BMW M3 GTR powered by a 450 hp V8 engine. The most powerful M3 ever set benchmarks in the GT class of the American Le Mans Series (ALMS) with its four-liter engine and raced in a quartet: Team BMW Motorsport entered two cars under the management of Charly Lamm and two other cars were raced by the American BMW Team PTG run by Tom Milner, who hailed originally from Germany. The coupé took seven victories in ten races, six of them were from pole positions. BMW works driver Jörg Müller won the driver’s championship in the GT Class, BMW Motorsport won the team placings, and BMW became constructors’ champion in the company’s most important export market.

But the advanced BMW M3 GTR also caused a sensation in Europe. Two each of these eight-cylinder racing cars lined up at the start of the 24 Hour Race at Spa-Francorchamps in Belgium and on the Nürburgring in 2004 and 2005.The result: In both years, BWM took a one-two victory on the Nürburgring, and class victory went to BMW in Spa in 2004.