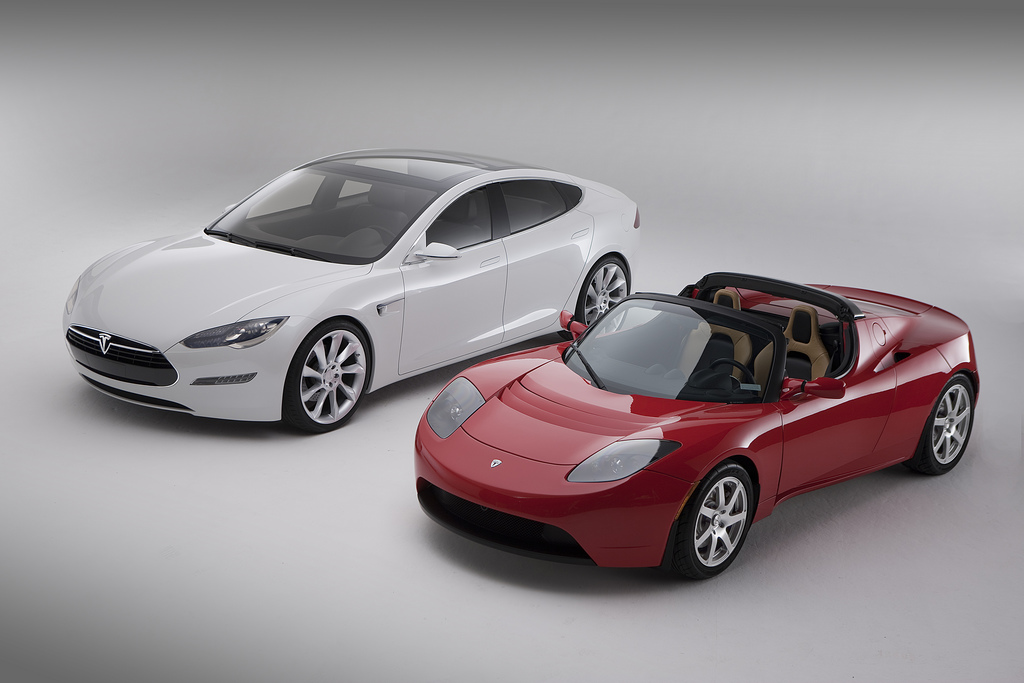 Tesla and Toyota have just made an agreement that will see the electric vehicle manufacturer and the world’s largest hybrid producer join forces on everything from EV parts and manufacture, to production systems and engineering support. The agreement will involve Toyota purchasing $50 million worth of Tesla’s common stock when an initial public offer is made.

In bigger news, Tesla has announced its purchase of the New United Motor Manufacturing Incorporated factory. The NUMMI factory, located in Fremont, California has produced the Toyota Corolla, Matrix, Tacoma, and the Pontiac Vibe. The plant is capable of producing 500,000 cars per year, but is likely to produce considerably less than that under Tesla. Initial plans involve production of the Model S electric sedan, with “future Tesla models” mentioned.

Please scroll down for the official press releases from Tesla and Toyota.

The two companies intend to form a specialist team to further those efforts. TMC has agreed to purchase $50 million of Tesla’s common stock issued in a private placement to close immediately subsequent to the closing of Tesla’s currently planned initial public offering.

"I’ve felt an infinite possibility about Tesla’s technology and its dedication to monozukuri (Toyota’s approach to manufacturing)," said TMC President Akio Toyoda. "Through this partnership, by working together with a venture business such as Tesla, Toyota would like to learn from the challenging spirit, quick decision-making, and flexibility that Tesla has. Decades ago, Toyota was also born as a venture business. By partnering with Tesla, my hope is that all Toyota employees will recall that ‘venture business spirit,’ and take on the challenges of the future."

"Toyota is a company founded on innovation, quality, and commitment to sustainable mobility. It is an honor and a powerful endorsement of our technology that Toyota would choose to invest in and partner with Tesla,” said Tesla CEO and cofounder Elon Musk. “We look forward to learning and benefiting from Toyota’s legendary engineering, manufacturing, and production expertise."

TMC has, since its foundation in 1937, operated under the philosophy of “contributing to the society through the manufacture of automobiles,” and made cars that satisfy its many customers around the world. TMC introduced the first-generation Prius hybrid vehicle in 1997, and produced approximately 2.5 million hybrids in the twelve years since. Late last year, TMC started lease of Prius Plug-in Hybrids, which can be charged using an external power source such as a household electric outlet. The company also plans to introduce EVs into the market by 2012.

Tesla’s goal is to produce increasingly affordable electric cars to mainstream buyers – relentlessly driving down the cost of EVs. Palo Alto, CA-based Tesla has delivered more than 1000 Roadsters to customers in North America, Europe and Asia. Tesla designs and manufactures EVs and EV powertrain components. It is currently the only automaker in the U.S. that builds and sells highway-capable EVs in serial production. The Tesla Roadster accelerates faster than most sports cars yet produces no emissions. Tesla service rangers make house calls to service Roadsters.

PALO ALTO, Calif. — Tesla Motors has purchased the former NUMMI factory in Fremont, California, where it will build the Model S sedan and future Tesla vehicles. As recently as April of 2010, the NUMMI factory was used by Toyota to produce the Corolla and Tacoma vehicles using the industry-leading Toyota production system. It is one of the largest, most advanced and cleanest automotive production plants in the world.

It is capable of producing half a million vehicles per year or approximately 1 percent of total worldwide car production. The award-winning plant was the birthplace of the vaunted Toyota Production System, a widely copied system that lead to dramatic quality improvements and unprecedented manufacturing flexibility and worker satisfaction.

The Model S is expected to be the first pure electric premium sedan and is designed from the ground up to take full advantage of the electric vehicle architecture. The sedan, which Tesla unveiled in March 2009, has an anticipated base price of $49,900, including a federal tax credit, and is intended to deliver the foremost design and technology in the automotive world. With an optional extended-range battery pack, the Model S will travel over 300 miles per charge.

The factory is located in the city of Fremont near Northern California’s Silicon Valley, very near Tesla’s Palo Alto headquarters. The location means Tesla can hire best-in-class engineers in Silicon Valley. The short distance also ensures a tight feedback loop between engineering, manufacturing and other divisions within the company.

Toyota produced its last car there just last month. Tesla began discussions to acquire the site this spring, when it was also evaluating opportunities in Downey and Long Beach. The turnkey nature of the facility with its recent production of top quality vehicles and its considerable room for expansion made it stand out from other sites.

Tesla’s goal is to produce increasingly affordable electric cars to mainstream buyers – relentlessly driving down the cost of EVs. Palo Alto, CA-based Tesla has delivered more than 1000 Roadsters to customers in North America, Europe and Asia. Tesla designs and manufactures EVs and EV powertrain components. It is currently the only automaker in the U.S. that builds and sells highway-capable EVs in serial production. The Tesla Roadster accelerates faster than most sports cars yet produces no emissions. Tesla Service Rangers make house calls to service Roadsters.