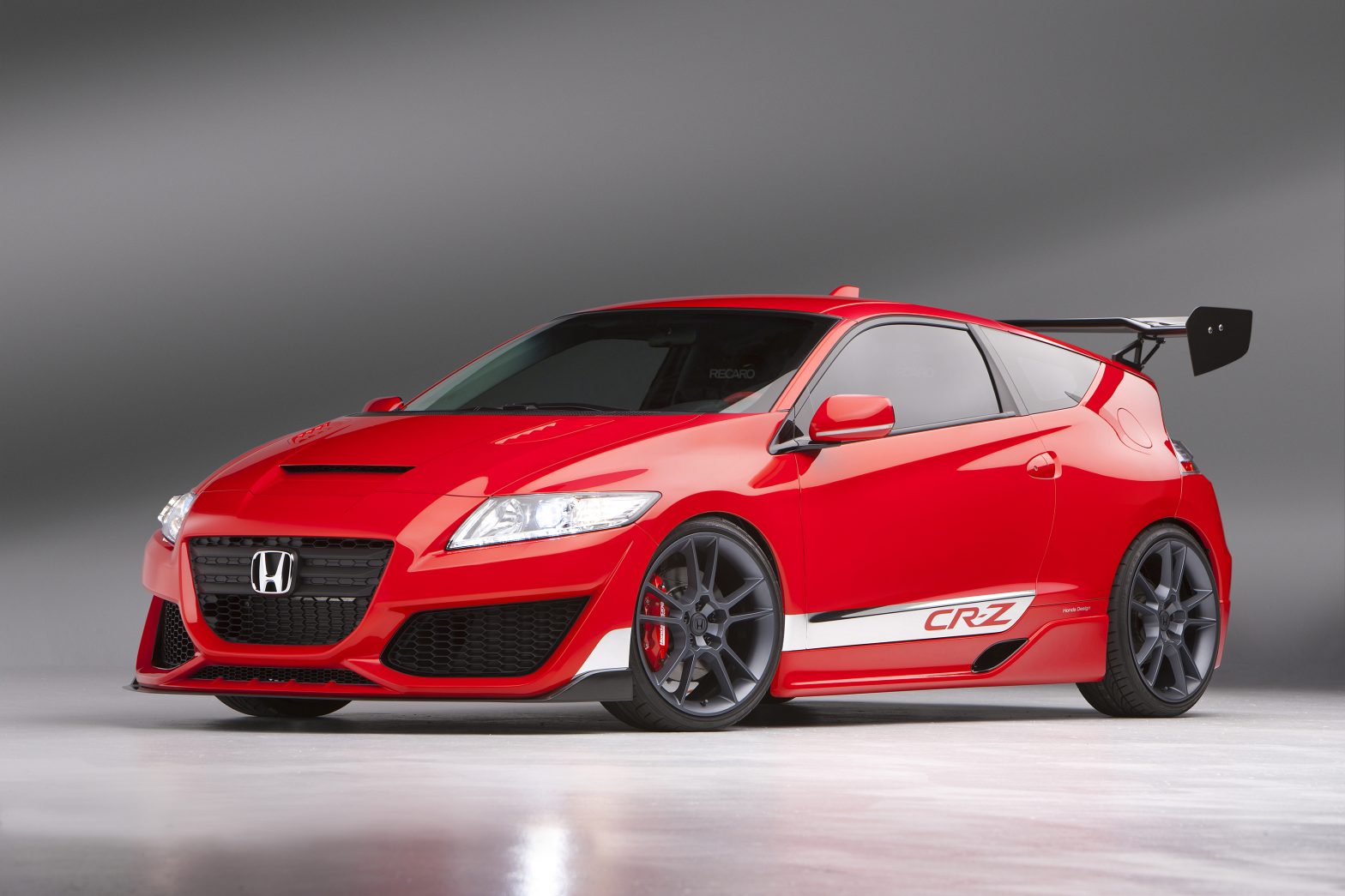 Before it arrived here, tuners in Japan were already modifying the 2011 Honda CR-Z hybrid. It comes as no surprise, then, that the Honda booth at the 2010 SEMA show is populated with different versions of the sporty hybrid.

Next, Honda Performance Development showed two concepts: the CR-Z Hybrid R Concept and the HPD CR-Z Racer. Both cars are turbocharged, and recieve an upgraded IMA hybrid system, good for about 200 horsepower and 175 pound-feet of torque. They baoth also get a performance clutch, upgraded brakes, limited-slip differential, sport tuned suspension, and an aero kit. Look for the HPD CR-Z Racer to compete in the 25 Hours of Thunderhill endurance race next month.

Scroll through the press release, below, for more details.

"With the CR-Z sport hybrid coupe, drivers can achieve the great efficiency of a hybrid car without giving up the fun that many demand from a sporty car," said Bruce Smith, vice president of Parts Operations for American Honda Motor Co., Inc. "The combination of greener practicality with style and fun makes this vehicle a perfect fit for young, environmentally conscious buyers looking to further personalize their cars."

A 2011 CR-Z equipped with MUGEN accessories is also being revealed, and Honda announced that in the spring of 2011, it will begin sales of a limited-edition MUGEN accessory kit for the vehicle. Limited to only 300 complete kits, the package includes: a full MUGEN body kit; a front grille; a rear wing spoiler; 17-inch "XJ" aluminum wheels; sport mats; a unique black aluminum shift knob and a billet aluminum oil-filler cap. Further, after purchase, each owner will receive a unique serial-number plaque designating each kit as one of 300 available. All of the painted parts will come color-matched to each of the five available CR-Z colors. Pricing details will be made available closer to the on-sale date.

Also unveiled today were two concept vehicles from HPD: the CR-Z Hybrid R Concept and the HPD CR-Z Racer. Though neither vehicle is intended for sale, HPD, Honda’s North American racing company, was determined to demonstrate the potential of the CR-Z for both street and racing performance. Both vehicles share many performance enhancements, with the CR-Z Hybrid R Concept highlighting Honda-designed street styling and the HPD CR-Z Racer opting for serious racing capability. To demonstrate that capability, HPD will campaign two HPD CR-Z Racers at the 25 Hours of Thunderhill endurance race in December. HPD enhancements to both cars include: a turbocharger and upgraded IMA™ hybrid system, resulting in an estimated combined 200 horsepower and 175 lb-ft. of torque; performance clutch; limited-slip differential; ‘circuit-tuned’ suspension; upgraded brakes and aerodynamic components.

Two vehicles were on display to demonstrate currently available Honda Genuine Accessories. For the CR-Z, Honda displayed a vehicle equipped with 17-inch alloy wheels; side, front lip and tailgate spoilers; a rear diffuser; an illuminated door-sill trim and an interior armrest. Additionally, a 2010 Accord Coupe equipped with dealer-installed Honda Factory Performance™ (HFP™) components melded a distinctive, custom appearance with an enhanced level of handling performance. All Honda Genuine Accessories offer the same 3-year/36,000 mile bumper-to-bumper warranty as the rest of the vehicle, when installed at the time of new vehicle purchase, and are engineered to be fully compatible with each Honda vehicle.

Reaching out to the import community, Honda invited six independent vehicle tuners to build and display their CR-Z hybrid concepts at the SEMA Show. Tuners were asked to push the limits to improve fuel economy and performance with their builds, and the vehicles on display show the variety of directions in which a personalized sport hybrid can go. Beyond this group, both the Los Angeles Auto Show and Honda Tuning Magazine displayed their CR-Z special project cars in the Honda booth.

Vehicles on Display at the Honda Booth