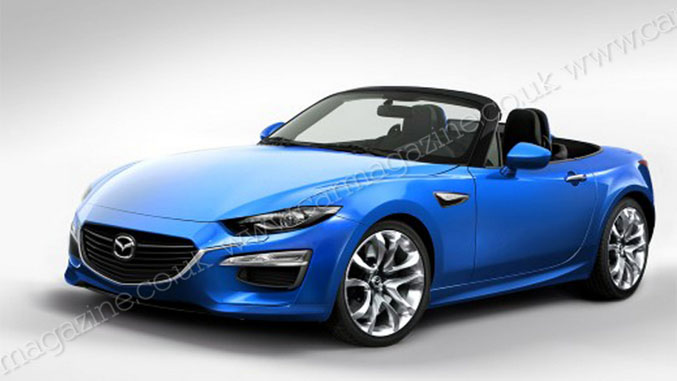 CAR magazine has provided a rendering of what they envision the next MX-5 may look like. Additionally, the team at CAR has a few theories about what changes await the legendary two seater.

To start with, and much to the glee of MX-5 enthusiasts, Mazda will continue its efforts to cut down weight across their model lines, which includes the Miata. To that end, the next MX-5 is rumored to weigh one approximately one tonne, or 2204 pounds.
CAR further speculates that the MX-5’s output will also get a modest bump as well, pushing output over 200 bhp for the first time. They expect to see naturally aspirated versions of Mazda’s 1.6 and 2.0-liter engines, along with the availability of a ragtop and folding hardtop roof.
Mazda has been pretty quiet about when we might get a glimpse of the upcoming refreshed roadster, but we’ll be keeping a keen eye out for anything Mazda might have on offer at next weeks Detroit Auto Show.
Check out our 2016 Mazda Miata overview page for the latest information about the car as it becomes available.
Tags:
MazdaMazda MX-5