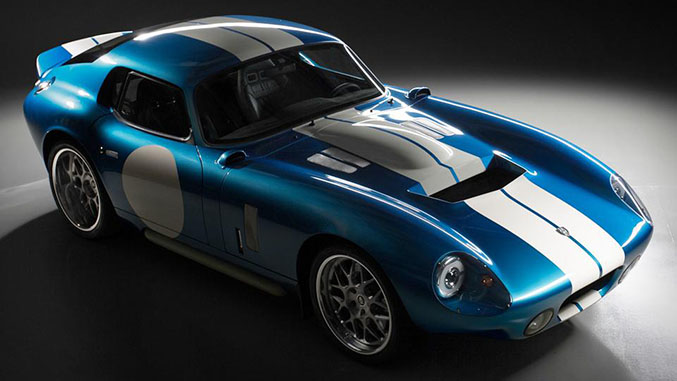 In the horsepower-flush times we currently live in, it’s becoming less and less of a Herculean task to take a capable chassis that already exists and stuff a proven performance powertrain in it and call it a supercar. However, it’s quite another thing to take the iconic silhouette of the Shelby Daytona Coupe and create enough all-electric motivation for it to proclaim it as "the first American all-electric supercar." But that’s just what Renovo has done, and their new car has all the right numbers to back up that claim.
Conceived in Silicon Valley and unveiled earlier this month at Pebble Beach, the Renovo Coupe lands just in time to celebrate the original Shelby Daytona’s 50th anniversary.

"I’ve always been a car guy", says Renovo’s CTO Jason Stinson, a former design engineer at Intel, "I’ve got a small collection of vintage cars that I wrench on. I’d still be at Intel, but I wanted to be a part of this history – a new chapter that’s being written." Jason, along with CEO Christopher Heiser, wanted to make sure they got the Coupe right from the start, and have been consulting with Peter Brock, the original designer of the Shelby Daytona Coupe, from the beginning of the Renovo project. Reassuringly, the finished product has Brock’s blessing: "When the Renovo team approached me with the idea of incorporating my work into their designs, I was thrilled. The finished product definitely carries the spirit of the original car strongly into the future."
Seeing the performance stats of the Renovo Coupe, we can see why the team is proud of their baby. Using twin sequential electric motors, the Coupe sends 500 horsepower and a staggering 1000lb-ft of torque to the rear wheels – all of which is available from idle. That’s enough grunt to get the Coupe from 0-60 in 3.4 seconds and to a top speed of 120 mph.

Crucially, and what is usually a stumbling block for EV performance, Renovo has managed to keep the bulk down as well, as the Renovo Coupe weighs in at just 3250 pounds. The team accomplished this feat by utilizing an innovative new battery design and focusing on the speed of recharging the system rather than the total range. The result is a range of only 100 miles on a full charge, but it’s a system which can be fully recharged in just 30 minutes rather than overnight. "We could’ve put bigger batteries in for a 300-mile range," Heiser said. "But then it would’ve been 4,500 pound car."
The Renovo Coupe will also get an extensive interior update from the Daytona on which its based, one which continues the theme of classic aesthetics married to cutting edge technology. New gauges will offer the relevant information about the electrically-powered drivetrain and a selector with allow the driver to adjust brake regeneration on the fly, but simplicity will remain a key tenet, as "we don’t want to distract our customers from the joy of driving the car" says Heiser.

The limited production of the Renovo Coupe will begin in the first quarter of 2015 in Silicon Valley, with deliveries to customers taking place shortly thereafter. The car will reportedly carry a price tag of $529,000. Check out the video below to see the Renovo Coupe in action, and the press release below that for additional details.
RENOVO MOTORS DEBUTS ALL-NEW 2015 RENOVO COUPE AT THE 2014 PEBBLEBEACH CONCOURSE D’ELEGANCE
– America‘s First All-Electric Supercar –
PEBBLE BEACH, Calif. (August 15, 2014) – Renovo Motors, Inc. today introduced the world to the groundbreaking Renovo Coupe with a production prototype on display at the 2014 Pebble Beach Concourse d’Elegance. Founded in 2010 with the mission to build the world’s most exciting vehicles, Renovo has operated in stealth mode for over four years as they developed and refined their patent-pending EV technology. The Coupe-the first all-electric American supercar-is the culmination of these efforts.
0-60 in under 3.4 seconds
1000 ft-lbs of direct-drive torque instantly available
Twin sequential axial flux motors producing over 500 horsepower
Incredible throttle response with full power available in just 37 milliseconds
Patent-pending modular lithium ion battery technology
A curb weight of just 3,250 lbs
30 minute quick charge and 5 hour level 2 charge
Genuine, factory modified Shelby American CSX9000 rolling chassis
Flexible control system with dynamic in-cabin regen adjustment
Proudly built in Silicon Valley, USA
Entering limited production in 2015
Featured at the 2014 PebbleBeach Concours d’Elegance
Preview at the Gold Rush Rally to benefit the Taylor Lynn Foundation
"Renovo Motors sought to create an aspirational vehicle that demonstrates the performance, control, and excitement that is possible with EV technology," said Renovo’s CEO Christopher Heiser. "We have poured our passion and innovation into the Coupe in an effort to deliver a truly amazing driving experience, and we’re honored to present the Production Prototype of our car at the Concours d’Elegance."
The Coupe sets a benchmark 0-60 time of just 3.4 seconds, the fastest of any production rear-wheel drive electric vehicle. The car’s massive 1,000 foot-pounds of torque is available immediately from a dead stop and delivers perfectly linear acceleration that is unlike any car on the road today.
The mid-mounted twin sequential axial-flux motors deliver both power and efficiency, with optimized energy mappings for a wide range of driving conditions. When run at full throttle, the motors produce over 500 horsepower. More importantly, the drivetrain ramps to full power in just 37 milliseconds-about ten times faster than the blink of an eye-and further redefines how a performance vehicle can respond to the commands of the driver.
The Coupe offers a new and unique viewpoint on the supercar segment. "Our motivation to design and build our cars is not artificially tied to any particular propulsion technology," notes Jason Stinson, Renovo Motors CTO. "Simply put, we can do things with electric vehicles that can’t be replicated by any other platform. Exploring these areas, reducing them to practice, and building them into our products is at the core of what we do best."
The Coupe’s incredible performance is made possible by the patent-pending battery technology developed by the Renovo team. Multiple separate battery enclosures enable a performance-oriented weight distribution and minimize chassis volume requirements. The Renovo Motors drivetrain is less than 40% of the total weight of the car, and yet delivers the highest peak power in its class.
The on-road performance is matched by a fast-charge system that can refill the batteries in just 30 minutes and maintains compatibility with a wide range of standard Level 2 charge systems. At the track, the Coupe can be charged between run sessions, offering the first true circuit-ready EV.
The Coupe’s sculpted drivetrain is on full display in its genuine, factory-modified CSX9000 chassis supplied by the world-famous Shelby American brand. Completely reimagined by award-winning designer Peter Brock, the CSX9000 delivers the features of a modern supercar while retaining the classic and race-proven aerodynamic silhouette of the original 1964 Le Mans winning car. "This shape was nearly perfect 50 years ago, and physics doesn’t change much over time," said Mr. Brock, an early advisor to Renovo Motors. "However, the redesigned car has a totally updated body, frame, suspension, and cabin; it’s a new chapter for this chassis. When the Renovo team approached me with the idea of incorporating my work into their designs, I was thrilled. The finished product definitely carries the spirit of the original car strongly into the future."
Every aspect of the Coupe’s interior was designed to create a more direct and immediate connection between machine and driver. From the cockpit the driver has access to a wide range of controls and information systems. Classic needle gauges surround a modern circular digital display, and a muscular drive selector enables brake regeneration to be adjusted in real-time-another first for a production electric vehicle.
Each Coupe is built at Renovo Motor’s facility in the heart of Silicon Valley, USA. The talented and experienced team of designers, engineers, and technicians at Renovo Motors are proud to share the Coupe Production Prototype with the world and are looking forward to entering the final stages of the car’s development program.
Renovo Motors brings the Coupe to limited series production in 2015. Pre-sales will commence at this Sunday’s PebbleBeach Concours d’Elegance. Initial sales are targeted for California and will expand nationwide later this year.
In addition to the Coupe’s global debut, Renovo will present an exclusive preview of the car on Saturday, August 16th at the Rolex Monterey Motorsports Reunion. The Renovo Coupe Production Prototype will be featured at the Gold Rush Rally in support of the Taylor Lynn foundation, a charity that provides microGRANTS™ focused on enhancing the lives of children.
Renovo Motors, a Silicon Valley Car Company, is driven to create the world’s most exciting vehicles. By harnessing the power of the latest electrical, mechanical, and software systems the Renovo team creates cars that redefine the driving experience. Their debut offering, the Renovo Coupe, sets multiple benchmarks in the EV supercar segment and demonstrates the performance, control, and excitement that is made possible by Renovo’s patent-pending technology.
Tags:
Coupeelectric vehiclesShelby