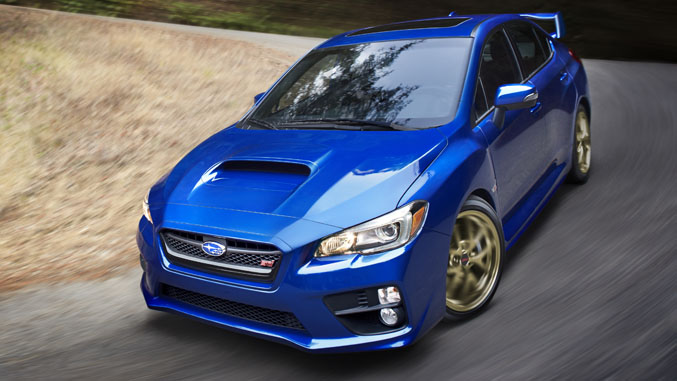 When we drove the standard WRX in November of last year, we found it to be a great road car with incredible handling capabilities, but it perhaps lacked a little something in the sex appeal department. With the new STI model, Subaru looks to increase the WRX’s performance capabilities even more, and make the WRX more of a head turner while they’re at it.
The new STI gets a dose of visual moxie by way of a more aggressive aero kit and the addition of the distinctive STI wing affixed out back. As we’d expect from the STI version of the WRX, the new car gets more power by way of Subaru’s turbocharged 2.5-liter boxer engine, here making 305 horsepower and 290 lb-ft of torque. Along with uprated springs and the new WRX’s firmer chassis, the STI also receives a quicker 13.0:1 steering ratio, and to further improve handling, the STI employs a number of handling technologies as well.

First seen on the standard 2015 WRX, Active Torque Vectoring will improve handling by sending power to the outside wheels and applying the brakes to the inside wheels while cornering. The STI will also get a "Multi-Mode Driver Controlled Center Differential" – a unique version of Subaru’s Symmetrical All-Wheel Drive system which provides the driver with the ability to select one of six center differential locking levels. Stopping power on the WRX STI will be provided by a Brembo-sourced system with Super Sport ABS.

Inside, the STI shares much of the same updated look of the new WRX. Providing some additional flare to the STI are the new Alcantara seating surfaces accented by red and black leather bolsters and red stitching, and a leather-wrapped flat-bottom steering wheel continues the theme.
If you’re particularly keen on the WRC-style WR Blue paint and gold BBS wheel combination on display here, you’d better act fast, as this particular configuration is designated as the STI Launch Edition, and will be limited to just 1000 units. Like the standard WRX, the STI will only be available in sedan form, but unlike the standard model, it will not be possible to option the STI with the CVT automatic gearbox.
Check out the video below to see the new WRX STI in action, and scope the press release below for additional details. Also be sure to keep an eye on the 2015 Subaru WRX STI overview page for additional details as we add them.
ALL-NEW 2015 SUBARU WRX® STI® DEBUTS AT NORTH AMERICAN INTERNATIONAL AUTO SHOW IN DETROIT
– New platform offers a stiffer, more agile chassis for Subaru’s global performance flagship model
– Bold new sedan model with aero body design
– High-performance chassis with new Active Torque Vectoring
– 305 hp turbo BOXER engine; most powerful engine in the segment
– Driver Controlled Center Differential All-Wheel Drive
– STI Launch Edition limited to 1,000 available
DETROIT, Jan. 14, 2014 – Subaru of America, Inc. today introduced the all-new 2015 WRX STI, Subaru’s iconic performance flagship model, at the North American International Auto Show. Subaru will offer a WRX STI Launch Edition, limited to 1,000 units and exclusively featuring WR Blue paint and gold BBS® forged alloy wheels and unique interior trim.
Powered by the legendary 305-horsepower 2.5-liter turbocharged BOXER engine, the 2015 WRX STI debuts a new four-door wide-body design, built on a stiffer chassis for even greater handling agility and precision. The WRX STI provides a rally-bred drivetrain and all-wheel drive handling that is unique to this model. Handling is enhanced with a stiffer chassis, firmer springs and faster steering (13.0:1 ratio).
New for the 2015 WRX STI, Active Torque Vectoring joins an arsenal of the model’s proven handling technologies that includes Multi-Mode Driver Controlled Center Differential (DCCD) Symmetrical All-Wheel Drive, Multi-Mode Vehicle Dynamics Control, and a Brembo® Performance Brake System with Super Sport ABS.
The 2015 WRX STI carries its bold personality inside, where new Alcantara seating surfaces accented by red and black leather bolsters and red stitching set the tone for the upgraded and roomier cabin. A driver-focused interior remains integral to the WRX STI performance character, with the new model debuting a motorsports-inspired flat-bottom steering wheel and new whiplash-reducing performance-design front seats with height and tilt-adjustable head restraints. A wide array of new user technologies include, for the first time in a WRX STI, availability of a harman/kardon® premium audio system.
Iconic STI Design Exclusively in Sedan Form
A bolder front design makes the 2015 WRX STI look ready to devour the road. The "nose-cone" configuration combines the grille and bumper cap into one unit ahead of the hood, which for the 2015 model is made from aluminum to reduce weight over the front of the car. Narrower headlights, designed to evoke a raptor’s stare, flank the Subaru hexagonal grille. It’s a more powerful stare thanks to new standard LED low-beam headlights.
The special hood, fenders, doors and quarters, bumpers, headlights and taillight clusters convey the WRX STI identity. As on previous WRX STI models, a functional hood scoop supplies the intercooler with fresh air, and in the 2015 model it is set more deeply into the hood to provide better forward visibility.
Tags:
BoxerSTISubaruSubaru of America Inc.WRX