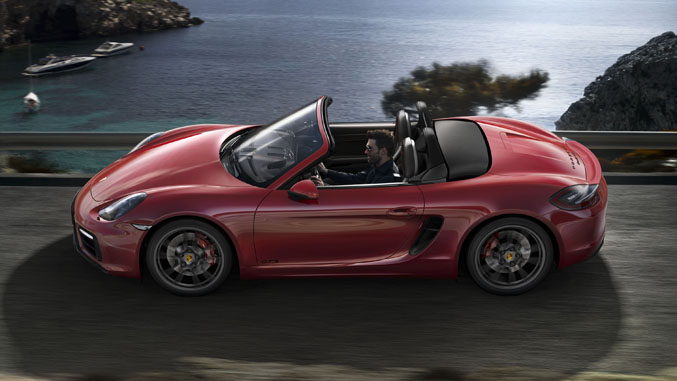 Not long ago, the Boxster and Cayman were saddled with the reputation as the Porsche 911 for buyers who couldn’t quite afford a Porsche 911. When the latest generation of the 911’s mid-engined little brother was unveiled two years ago, that conversation started to change – in some ways the Boxster and Cayman were seen as even better handling cars than their 911 brethren. Still, a lack of horsepower and the sophisticated technologies offered on 911 has kept the Boxster and Cayman a notch below in the Porsche lineup. However, that line is starting to blur with the introduction of the Boxster GTS and Cayman GTS.
The first mid-engined Porsche to wear the GTS badge since the 904 Carrera of 1963, the new car starts off life as an S model Boxster or Cayman, where its 3.4-liter flat six engine gets a 15 horsepower and 7 lb-ft bump in power, bringing the new total output to 330 horsepower and 273 pound-feet of torque in the Boxster and 340 horsepower and 280 lb-ft of torque in the Cayman. Both will feature the Sport Chrono package and the PASM active suspension system as standard. To help visually differentiate the GTS from its lesser counterparts it will also come with blacked out Carrera S 20-inch alloys, headlight surrounds, trim and exhaust pipes.

The GTS models will be offered with a choice of either a six speed manual gearbox or a seven-speed dual clutch unit. Equipped with the latter, the Boxster GTS is said to hit 60 mph from rest in 4.4 seconds, while the coupe will do the deed in 4.3 seconds – an improvement of three tenths of a second for each.
Inside, the GTS will feature an alcantara wrapped steering wheel, headliner, center console, and seat inserts, as well as GTS-embroidered headrests on the now-standard sport seats.