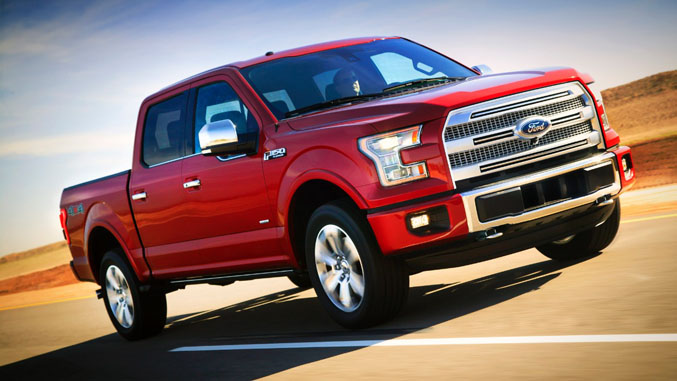 Ford’s venerable full-size has been the best selling pickup truck in the United States for more than four decades. While altering a winning formula is almost always risky endeavor, with mounting fuel efficiency standards looming, Ford had no choice but to shake things up significantly for the all-new 2015 F-150. Fortunately, it appears the engineers and bean counters did their homework on this one, as the new F-150 looks to be a big step forward for Ford’s most popular line of trucks.
Based on the Atlas Concept that Ford showed off at last year’s Detroit Auto Show, perhaps the biggest news about the new truck is the incredible diet it has gone on – one which has allowed the F-150 to shed 700 pounds of weight in the process. The vast majority of that weight loss can be attributed to the use of aluminum alloy in the truck’s body panels, as well as the increased use of high-strength steel in the truck’s ladder-box frame. In terms of the former, Ford has gone to great lengths to reassure its customers that the transition to aluminum alloy will actually translate not only into better performance and fuel economy, but a tougher truck as well. Indeed, the aluminum alloy used here is very similar to what the US Military uses on vehicles like the Humvee and M2 Bradley, and Ford expects this new alloy to be even more resistant to dents and dings than ever before.

In keeping with the theme of fuel economy, the F-150 also adds an engine to its lineup while dropping another. The new entry to the roster is a 2.7-liter EcoBoost V6, an engine which according to Raj Nair, group vice president of global product development, "combines a host of advanced technologies found throughout the industry to create one of the most technically advanced and efficient engines ever designed." While no official figures have been released for the new motor, Ford promises that its output should be very competitive with the small V8s on offer from other manufactures.
The F-150s engine lineup now starts with the 3.5-liter V6, with the new 2.7-liter EcoBoost mill slotted above it, the 5.0-liter V8 above that, and the 3.5-liter EcoBoost V6 topping out the range. If it sounds like someone is missing from the party, it’s because the raucous 6.2-liter V8 is no longer on offer in the F-150.