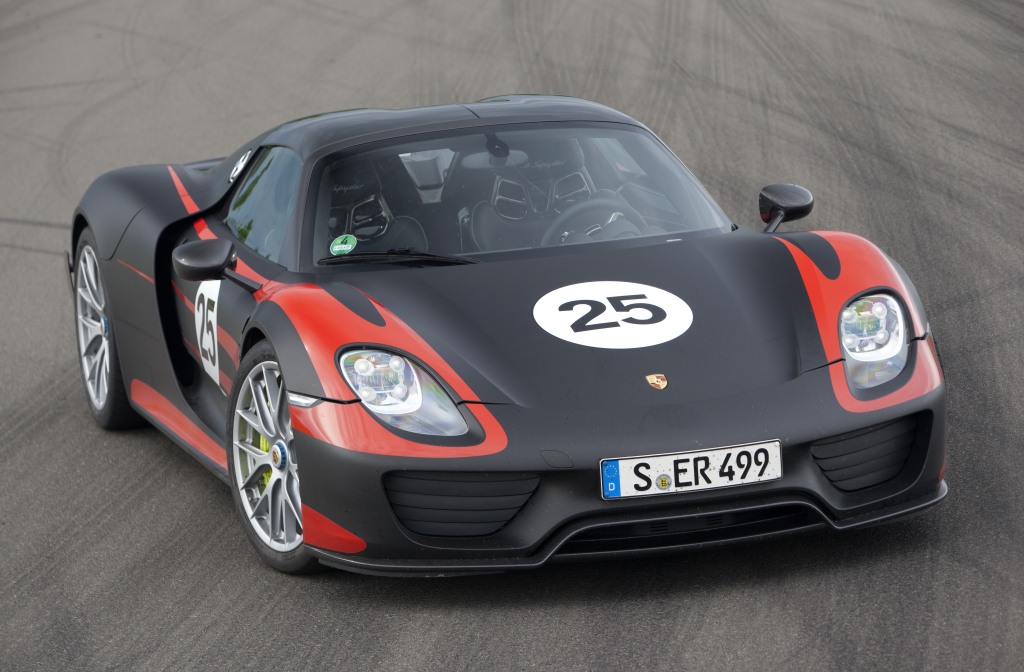 For more information about the Porsche 918 Spyder, including news, reviews, photos, and videos, please visit its master landing page.
Years after we found out what it looked like, Porsche has finally released complete details on the 918 Spyder. We covered a few facets of the car’s performance earlier this week, but the attached press release has almost everything.
As we mentioned yesterday, the 918 Spyder is a plug-in hybrid hypercar (if you want the abridged version of the following paragraphs, click here). A 4.6-liter V-8 sits amidships, churning out 608 horsepower at 8600 rpm. Torque rests at 390 pound-feet at 6600 rpms, while the max engine speed is 9150 rpms. Joining the V-8 are a pair of electric motors, one for each axle. The rear-axle motor packs an extra 154 horsepower, while the front axle has 127 horsepower. Combined system power sits at 887 ponies. Torque, meanwhile, amounts to 940 pound-feet with over 590 pound-feet available between 800 and 5000 rpm.
Not surprisingly, the 918 will be fast. 62 miles per hour arrive sin just 2.8 seconds, while driver’s can hit 124 mph in 7.9. Keep the pedal to the floor, and 186 mph arrives in just 23 seconds. The top speed is over 211 mph.
This being 2013, though, the 918 needs to be green. Its twin electric motors and 312-cell lithium-ion battery allow it to cover about 18 miles on electricity alone, as well as hitting 62 mph in about seven seconds. Charging takes seven hours on a standard wall plug, or two hours on a rapid charger. Buyers can also opt for a more potent at-home solution, that completely juices the 918’s battery in 25 minutes.
Speaking of those two electric motors, mounting one on each axle essentially gives the 918 a torque-vectoring all-wheel-drive system. That, along with the seven-speed PDK gearbox, account for a fair portion of this Porsche’s performance.
To control the myriad systems at play in the 918, drivers will have five different driving modes at their disposal. Controlled via a switch on the steering wheel, the driver can easily select a mode based on the conditions.
“E-Power” is the default mode on a charged battery. The 4.6-liter V-8 will only kick in when there’s a power demand that the electric motors can’t fulfill. “Hybrid” mode functions just like your uppity neighbor’s Prius, with every aspect of the powertrain working together.
“Sport Hybrid” keeps the gas engine running full time, and is the primary source of power. The electric motors act in more of a support role. “Race Hybrid” sharpens things up, with the gas engine’s leash being let out even further. The V-8 will charge the batteries when its full potential isn’t used, while the electric motors deliver their maximum amount of power. Finally, “Hot Lap” pulls out all the stops, and will drain the battery packs in order to deliver maximum performance.
We were told back in March of 2011 that the 918 Spyder would go on sale September of 2013, with pricing to start at $845,000. If that is the case, the 918 should be more affordable than either of its primary competitors, the McLaren P1 and Ferrari LaFerrari.
Please scroll down for the official press release from Porsche.

Base Versus Loaded: 2013 Tesla Model S