Plug It In, Plug It In: Volvo C30 EV Coming To Detroit Auto Show 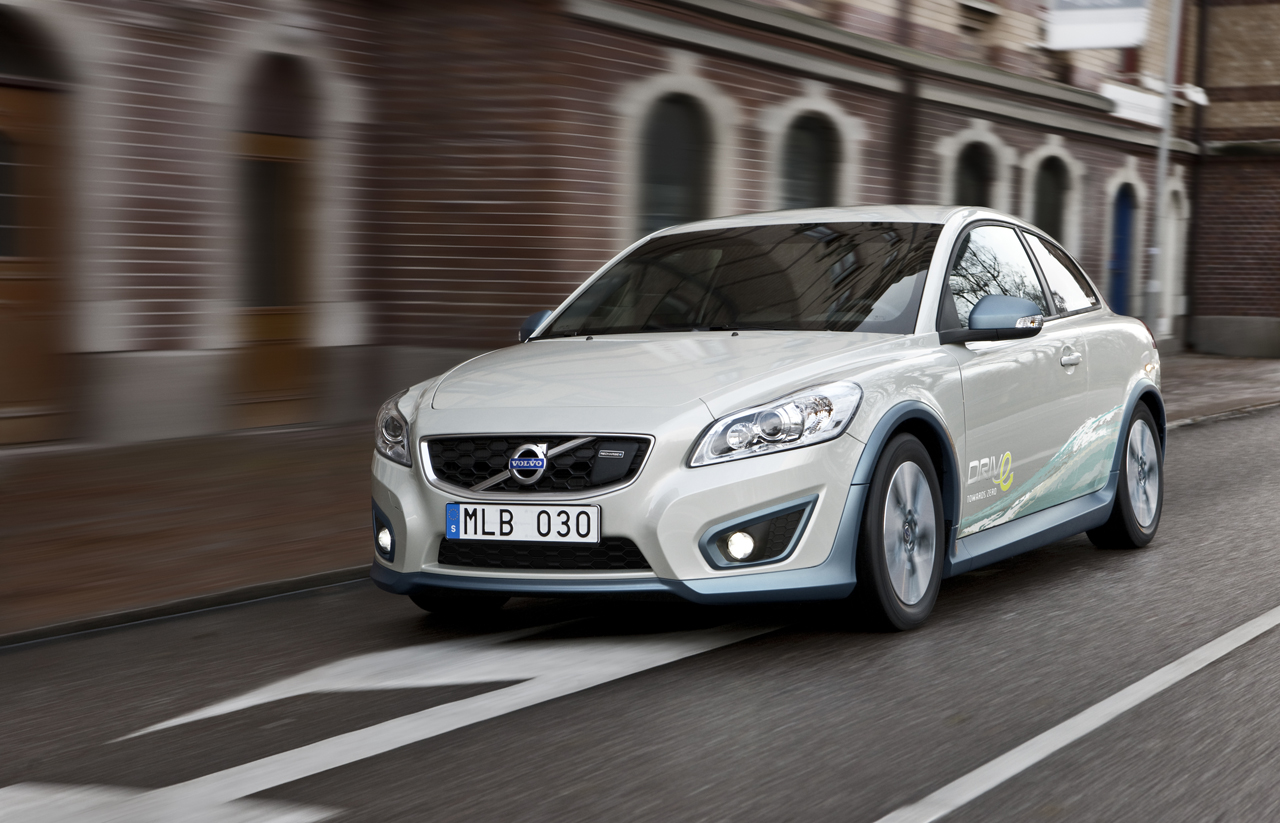 Volvo initially debuted an all-electric C30 hatchback in September at the Frankfurt Motor Show, but a more evolved version of this EV will be making an appearance at the Detroit Auto Show next month. Why? Volvo is planning to build fifty units of the EV C30 and will start doing real-world road tests in 2011.

The enhanced C30 EV now features a complete interior with full instrumentation, as well as better overall packaging for the battery unit. That electric motor is good for a range of about 150 kilometers (93-ish miles), and produces 24 kWh of nominal energy, of which 22.7 kWh is actually used to power the car. Volvo says that the EV C30 will sprint from a stop to 62 miles per hour in 10.5 seconds. It’s not as quick as the Mini E we tested recently, but we like that the C30 remains a full four-seater, whereas the Mini’s rear seats were removed.

Stay tuned for more information at the North American International Auto Show in a few weeks. For now, scroll down to read Volvo’s press release.

At the Detroit Motor Show, Volvo Cars is presenting a complete battery electric Volvo C30 with a range of 150 km. The next step forward is to build a test fleet of at least 50 electric Volvo C30s, which will be used in real-life traffic from 2011.

Volvo presented a driveable electric car prototype in September 2009. The C30 now being shown in Detroit takes the company one step further in the development process. It features both a complete interior and full instrumentation, as well as enhanced battery packaging.

"The first prototype helped us identify the main technological challenges, such as battery packaging and safety issues. We have addressed these challenges without compromising the C30’s cool and fun-to-drive personality. I am very happy with the result. The electric C30 in Detroit is a much more complete product," says Lennart Stegland, Director of Volvo Cars Special Vehicles.

The next step in 2010 is a factory-built series of test cars. Selected users will drive the test fleet during a two-year trial period in order to provide Volvo Cars with valuable experience. Not just technical but also behavioural.

The Swedish Energy Agency is supporting the project by contributing SEK 150 million towards its funding.

Valuable field data
A pure electric car has different characteristics compared to a car with an internal combustion engine. Now Volvo’s experts will have the opportunity to study how users handle these differences.

"Our test fleet data will be valuable in Volvo Cars’ development of electric cars. It will also provide crucial input for the infrastructure planners and help define which services are needed to make rechargeable cars the most attractive choice in the future," says Lennart Stegland.

New instruments and graphics
The electric C30 looks like a regular Volvo C30 and it offers the very same safety, comfort and roominess as the standard car. The most obvious difference inside the car is the new instruments facing the driver. The gauges and graphics are somewhat different to those in a conventional Volvo. The cool and user-friendly combined instrument shows in principle only road speed and energy consumption. However, it also integrates a number of new symbols such as a gauge for battery charge status and other relevant information for this type of vehicle.

The driving experience is also different to that in a conventional car. The electric C30 has no gears and the motor’s power is delivered seamlessly, with full power available immediately.

"Sailing along virtually without a sound is a very special experience. The power is there instantaneously. We need to spend a lot of time verifying a transmission system that is both comfortable and safe for the driver to handle and at the same time utilizes the battery’s capacity optimally at different speeds," says Lennart Stegland.

Like a regular C30 – all the fun but with no emissions
An electric motor uses about one-fourth as much energy as an engine running on fossil fuels. This superior energy efficiency suggests that interest in electric cars will increase as fuel prices rise and demands for low CO2 emissions become increasingly stringent.

The Volvo C30 shown in Detroit is powered by Lithium-Ion batteries that can be recharged via either a regular household power socket or special roadside charging stations. Charging the battery fully takes about eight hours.

If the car is recharged with renewable electricity, CO2 emissions could be almost zero in the well-to-wheel perspective. Top speed with a fully charged battery pack is about 130 km/h (81 mph). Acceleration from 0 to 60 mph takes less than 11 seconds. The car’s range is up to 150 km (94 miles). This covers the daily transport needs of more than 90 percent of all motorists in Europe.

As safe as all other Volvos
The electric motor is fitted under the bonnet while the batteries (24 kWh) are installed in the propshaft tunnel and in the space normally occupied by the fuel tank, outside the passenger compartment and away from the deformations zones.

"What is more, they are well encapsulated and the structure around them has been reinforced. Electric cars represent yet another interesting challenge in our dedication to building the world’s safest cars. An electrically powered Volvo must be as safe as all other new Volvos. And the very same standards also apply to ownership, driving and protection in the event of an accident," says Thomas Broberg, Senior Safety Advisor at Volvo Cars.

Market prospects for electric power
When it comes to electric-only cars, there are several factors that determine their appeal in the future. "The consumers must feel that this type of car is attractive both to drive and own. That is why electric cars have to be as comfortable and safe and offer the same sort of performance as cars with other power sources," says Paul Gustavsson, Director of Electrification Strategy at Volvo Cars.

He continues: "We believe in this technology and our field test aims to demonstrate that electric cars have considerable market potential. However, offering an attractive car is not enough. What is also needed initially is a system of subsidies to make the electric car’s expensive battery technology financially viable for the car buyers. We hope that the authorities and the rest of the society will follow Volvo Cars in our "Drive Towards Zero" – Volvo Cars’ journey towards zero emissions."

GMC Acadia Gets The Denali Treatment For 2011