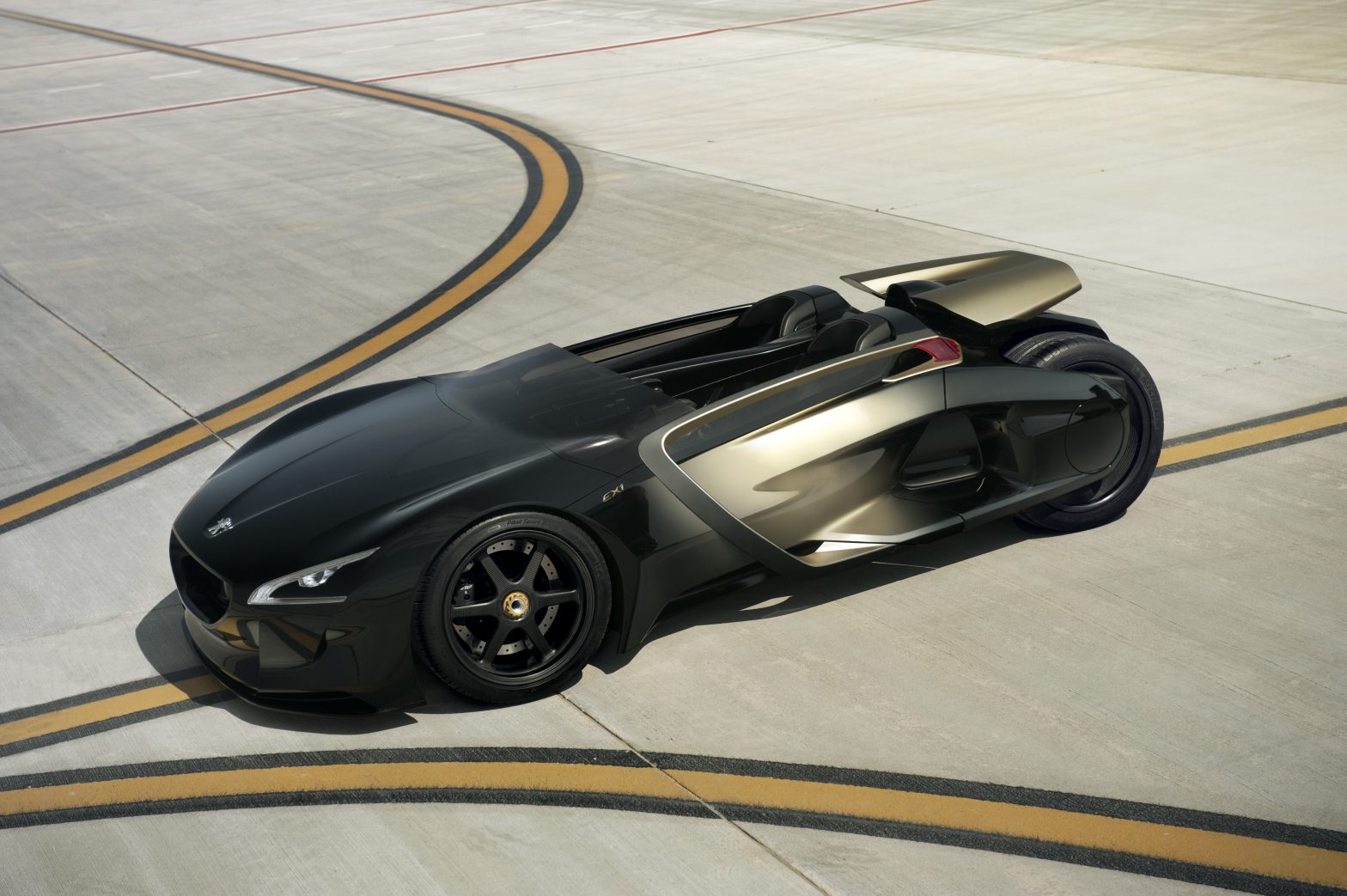 Today, Peugeot pulled the wraps off its EX1 all-electric concept car ahead of its debut at the Paris Motor Show.

Powered by an electric motor at each axle, thus making it four-wheel drive, the EX1 produces a total of 340 horsepower, with 177 pound-feet of torque available at each axle from zero rpm. Energy is stored in a high-output lithium-ion battery.

The EX1’s unique shape is meant to aid in streamlining the vehicle for maximum efficiency and balance. Its low center of gravity also speaks to this. The driver sits at floor level in the car, and drives the car with two control handles. We’re hoping for more details on this at the debut, so stay tuned.

Though Peugeot doesn’t give detailed specs, it is lightweight and aerodynamic, aiding in its overall quickness. In terms of acceleration, the EX1 is capable of  a claimed 1 g, which should translate to some pretty quick 0-60 times. Peugeot expects the EX1 to break performance records in the near future.

Scroll down for more details in the press release, below.

Peugeot’s latest concept car is a visually striking two-seater roadster with a futuristic styling and an original architecture, designed to offer intense driving sensations as a celebration of the Marque’s 200th anniversary.

The EX1 has already broken several world records for acceleration from a standing start.

It owes its stunning performance to its streamlined aerodynamics, its ultra-light structure and its two electric motors, which give the car a cumulative maximum power of 250 kW (340 bhp) and four-wheel drive.

As the preparations for the commercial launch of the iOn near completion, Peugeot demonstrates with the EX1 the exciting possibilities for electric power.

The powerful spirit of inventiveness is always present in Peugeot’s design offices and helps create an unceasing flow of ideas. The most daring, interesting and exciting of these ideas sometimes come together, to give the body and soul to an extreme dream car.

With the desire to unveil a stunning creation to celebrate Peugeot’s 200th anniversary, some of these exciting ideas quickly became associated with another ambition: that of highlighting the enormous possibilities offered by the use of electric power in the realm of creating new driving sensations.

To this end, engineers and stylists explored the Marque’s history to find the most radical technical solutions to use as a basis to produce a futuristic performance car dedicated entirely to creating new driving sensations yet at the same time presenting responsible environmental credentials. The original architecture is reminiscent of previous charismatic concept cars like the Asphalte and 20Cup, while also benefiting from all of the Marque’s historical expertise in the field of electric vehicles.

At a time when the electric motor once again becomes 100% real for Peugeot, with the i0n about to go on sale, the EX1 propels us into a new dimension of raw emotion.

The pure styling of this two-seater roadster is in keeping with its mechanical design, like a kind of “exoskeleton” highlighting the light-weight nature that guided the vehicle’s creation.

The design of the body incorporates Peugeot’s new stylistic design codes, first seen on the SR1 concept car earlier this year, with its “floating” front grille and flowing contours. Polished aluminium components adorn the door surrounds in a reference to the RCZ and BB1.

Architecture, structure and suspension. at the service of maximum efficiency

Far from being a “classic” roadster, the EX1 concept car is based on an architecture shaped like a “water droplet”, with a rear section built around two closely set rear wheels.

Based on the experience gained from creating the 1996 Asphalte concept car and the two 20Cup models from 2005. The chosen architecture of the EX1 has enabled the size of the passenger compartment to be reduced for optimal weight distribution and ensure that there is no extra weight at all in the overhangs.

The suspension employs a number of technical solutions that ensure road holding of a very high level. The front suspension consists of a drop link double wishbone arrangement. The rear suspension comprises of a single “swinging arm” linked to a centrally mounted shock absorber which is connected via a rocker arm to provide a variable damping rate.

The monocoque body structure is manufactured from a carbon/honeycomb composite to optimise weight and rigidity. It also incorporates all of the mounting points for the car’s mechanical components.

Finally, the dimensions of the car (0.90 m high with a width of 1.77 m) contribute to overall efficiency, a lowering of the centre of gravity and improved aerodynamics.

Engines: PEUGEOT expertise in the field of electric power

The electric motor is a potential source of new driving sensations thanks to its exceptional acceleration capabilities, but also because it is silent in operation and makes the car very easy to drive (no need for a gearbox).

On the EX1 concept car, two electric motors are used, one on each axle, each with a peak output of 125 kW (250 kW / 340 bhp in total), and an immediately available constant maximum torque of 240 Nm at the front and rear.

This mechanical architecture allows not only the optimisation of weight distribution, but also four wheel drive. This reflects the positional benefits of HYbrid4 technology, available as standard on the 3008 from 2011, featuring an HDi FAP diesel engine at the front and an electric motor at the rear.

A futuristic and sophisticated passenger compartment

The driver and passenger climb into the passenger compartment through a reverse-opening door, giving access to the two sports bucket seats. This unusual arrangement instantly immerses the occupants in a futuristic and sophisticated environment, as does the on-board instrumentation (instrument panel screens for each occupant showing in particular the vehicle’s instantaneous performance) and the chosen materials (e.g. “pure” metals and embossed leather).

The driver, seated at floor level in a driving position that helps enhances the sense of excitement (legs outstretched), drives the vehicle with two control handles, providing an experience similar to that of an aircraft pilot or video game.

As well as the presence of harnesses inside the car, the occupants are also protected by the height of the carbon passenger cell, which has sufficient overhead clearance to include a roll-over protection bar. Similarly, the wind deflector, perfectly integrated in terms of style, allows the car to be driven on a daily basis without a helmet.

An electric dream car designed to be a record beater

The EX1 concept car benefits from characteristics that give it a high enough level of performance not only to leave behind the city centre, the preferred territory of electric vehicles, but also to challenge acceleration records.

Its lightness, weight distribution and aerodynamics, the torque and power of its two electric motors and its high-output lithium-ion battery are just some of the characteristics that make this a car capable of lightning acceleration: the latter can exceed 1 G of gravitational force.

Indeed the EX1 concept car has already broken the following international records (approved by the International Automobile Federation) for an electric-powered terrestrial vehicle.

This series of records was established, by Nicolas Vanier, the famous French explorer and film-maker (“The Last Trapper”, “Wolf”) who drove the EX1 concept car.

Between now and the end of the year, China, the world’s largest car market, will be the setting for the EX1 to pursues other world records.