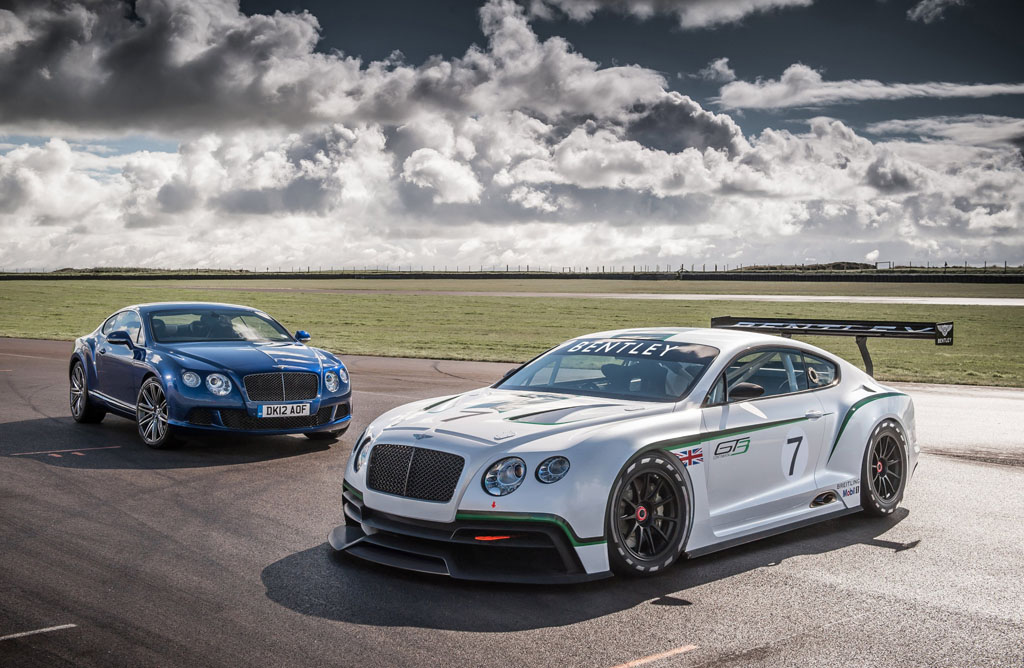 Bentley has declared its intention to return to the world of racing. Ten years on from the debut of the Continental GT Concept, the British brand has debuted a racing version, called the Continental GT3 Concept.
To get ready for the world of endurance racing, Bentley ditched the hefty all-wheel-drive system of the standard car in favor of a GT3-compliant rear-drive setup. It also sports a state-of-the-art aerodynamics package, allowing this big racer to slice through the air. Bentley doesn’t mention any specific racing series its targeting with the GT3, but claims it has the full support of the FIA, and specifically mentions 24-hour racing. If that’s not hinting at a return to Le Mans (for a potential seventh win), we don’t know what is.
Other than that, there’s not much to go on here. Development will continue on the GT3 over the coming months, with a test program slated to start in 2013.
Please scroll down for the official press release from Bentley.
Bentley unveils new Continental GT3 concept racer
Based on Bentley’s fastest ever road car – the new GT Speed
FIA-approved concept with 2013 test programme in development
(Paris, 26 September 2012). At the 2002 Paris Motor Show, the unveiling of the Continental GT concept took the world by storm and opened an exciting new chapter in Bentley’s history. Now, ten years on, Bentley is repeating the same feat with a Continental-based GT3 race car currently being developed by a dedicated motorsport team at the company’s factory in Crewe.
Signalling Bentley’s return to the racetrack for the first time since its historic sixth Le Mans victory in 2003, Continental GT3 remains faithful to the company’s founding motorsport philosophy of developing racing cars from their road-going counterparts.
Dr Wolfgang Schreiber, Bentley’s Chairman and Chief Executive, comments: "The clear message from our customers is that Bentley belongs on the racetrack, and the Continental GT3 is the realisation of a dream we’ve had ever since the launch of the Continental GT. The new GT Speed is the perfect car for us to develop into a racer, and our work so far has shown huge potential. The Continental GT3 is set to show the world what the Continental GT is capable of in its most extreme form, and establishes a solid foundation for Bentley’s long-term motorsport plans."
The new Continental GT Speed is a refined, luxury grand tourer but which, if the driver demands, has a distinctly hard-edged sporting character. With exceptional levels of instantly accessible performance, the GT Speed, the fastest road-going Bentley ever, is a supercar that can be used every day, whatever the weather and road conditions. The Continental GT3 concept capitalises on the prodigious performance, outstanding high-speed stability and renowned durability of Bentley’s iconic coupe, while tailoring its specification for the track with the adoption of a rear-wheel drive chassis in accordance with the regulations, state-of-the-art motorsport hardware and a comprehensive aerodynamic package. The dramatic livery of the car enhances the muscular, sculpted form of the Continental GT Speed while remaining proudly patriotic with the inclusion of Union flags.
With the Continental GT3 concept receiving the full support of the FIA, Bentley is returning to the motorsport arena towards the end of 2013 with a GT race car capable of competing with the very best, in the true Bentley tradition.
Equipped for endurance as well as outright speed, the new Bentley competitor will be eligible to race in a range of race series and events, up to and including 24-hour marathons.
Heading the development of the Continental GT3 is Bentley’s Director of Chassis, Powertrain and Motorsport, Brian Gush. Having led the programme that famously saw a brace of Bentley Speed 8 prototype racers take a dominant and dramatic one/two at the 24 Hours of Le Mans in 2003, Brian is well placed to lead Bentley’s return to competitive racing.
Development of the Continental GT3 will continue over the coming months in the build-up to the start of a test programme in 2013. More information and details about Bentley’s return to motorsport will be released in the near future.
Tags:
Bentleybentley conti gtBentley Continental GTbentley continental gt3Chairman and Chief Executiveconcept carconti gtContinental GT3racerroad car