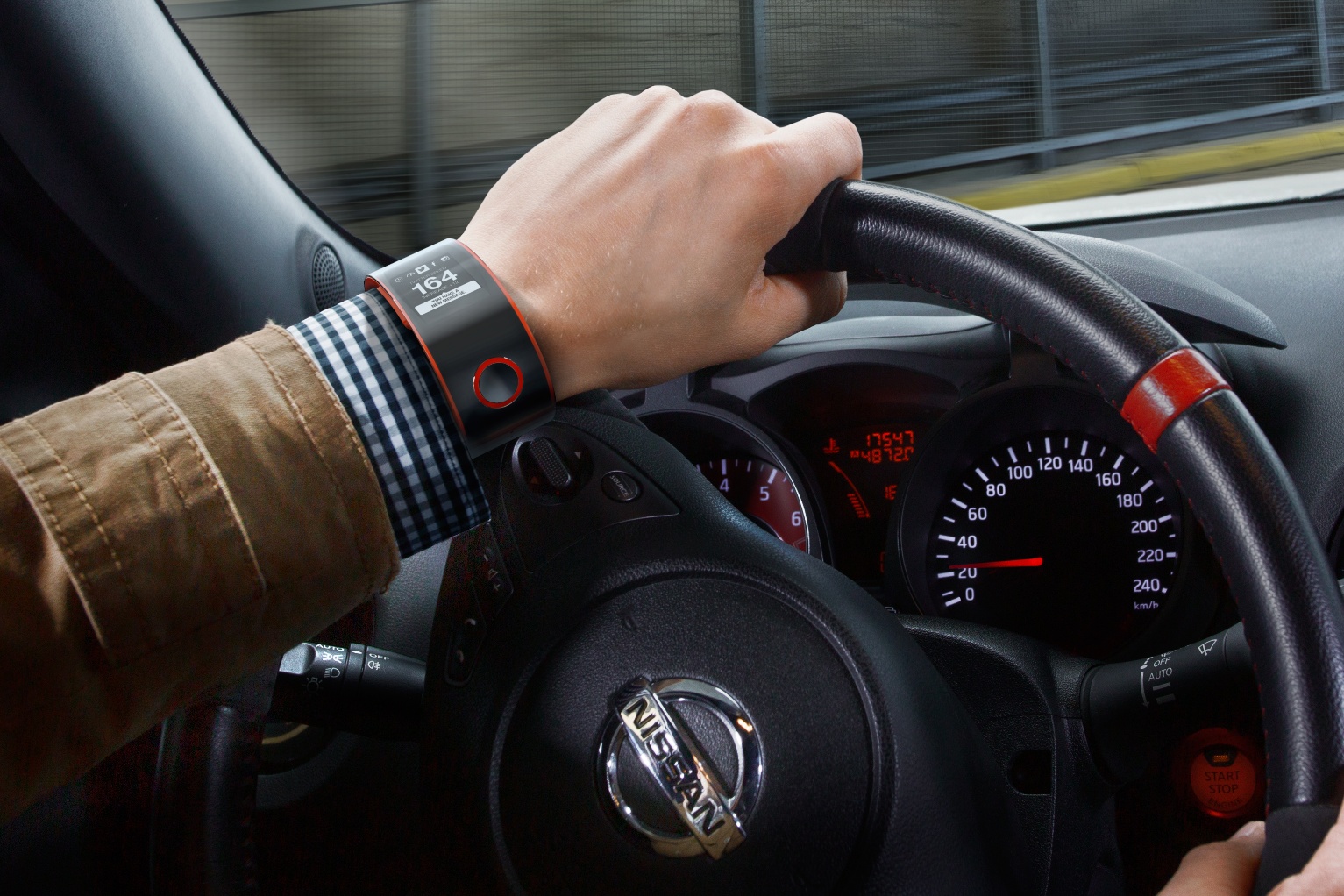 Nissan has launched the Nismo Watch Concept, a smartwatch that captures performance driving data, measures biometrics, and connects to social media. Designed for drivers of Nismo cars, the watch concept is being displayed at the Frankfurt Motor Show, and it’s a lot more than just a slick-looking timepiece.
There is definitely an athletic aspect to motorsports, and a driver who is in good shape with find it easier to control their car, withstand the forces at play, and overcome driver fatigue. With this in mind, the Nismo Watch uses electrocardiogram (ECG), electroencephalogram (EEG) and skin temperature monitoring technologies to provide important feedback to the wearer. ECG monitors heart rate and fatigue. EEG monitors brainwave function, which helps the driver achieve the “zone” mindset. Skin temperature levels can help prevent fatigue and dehydration.

In addition to this, the Nismo Watch connects wirelessly to the car, and captures performance data like speed, g forces, and fuel consumption, and combines them with the other data to give a broad picture of what is going on throughout the drive or race.
Finally, the Nismo Watch can then connect to the user’s social media accounts to share the desired data on Twitter, Facebook, and the like.
The Nismo Watch comes in three colors, and is packages in a box made from rubber scraped from the racetrack.

Learn more about the Nismo Watch concept in the videos below, or keep scrolling to read the official press release from Nissan.
NISSAN ENTERS WEARABLE TECHNOLOGY SPACE WITH THE UNVEIL OF THE NISMO WATCH CONCEPT
Nissan launches first smartwatch to connect car and driver performance
Rolle, Switzerland, 9th September, 2013 – Nissan will become the first car manufacturer to create a smartwatch designed specifically for drivers of Nissan Nismo cars. The Nissan Nismo Concept Watch will be the first smartwatch to connect a driver to the car and will provide drivers with real-time biometric data.
The watch, unveiled today ahead of its display at the Frankfurt Motor Show (10th – 22nd September 2013), is Nissan’s first step into wearable technology and epitomises its ‘fan first’ approach to performance.
The Nissan Nismo Watch will allow drivers to:
Gareth Dunsmore, Marketing Communications General Manager, Nissan in Europe, commented: "Wearable technology is fast becoming the next big thing and we want to take advantage of this innovative technology to make our Nismo Brand more accessible. On track, Nissan uses the latest biometric training technologies to improve the performance of our Nissan Nismo Athletes and it is this technology we want to bring to our fans to enhance their driving experience and Nismo ownership."
Earlier this year, Nissan launched the Nismo Lab – a bespoke, mobile laboratory that features the latest, advanced biometric training tools such as brainwave technology and JukeRide – a cutting-edge performance analysis tool, that captures live biometric and telematics data from the race cars and Nissan Nismo Athletes during races. Nismo’s vision is to take these digital age technologies and make them available to athletes from other disciplines and to Nissan owners through future wearable tech. Three key technologies have already identified for future development:
The Nismo Watch will also track and rate the user’s social performance across Facebook, Twitter, Pinterest and Instagram via Nissan’s proprietary Social Speed software.
The sleek Nismo Watch will be available in three colours – black, white and the flagship black and red. The watch design was inspired by the Nismo ring and is reflected in a seamless, futuristic and ergonomic design.  The simple user interface can be controlled by two buttons and is secured onto the driver’s wrist via a simple snap-fit mechanism.
Even the packaging will have a unique Nismo identity.
Dunsmore concluded: "We have brought the Nismo experience to life in every aspect of the watch, including its packaging, which will be made using tyres and rubber from the racetrack. As Nismo is the performance arm of Nissan, we wanted a way of integrating Nismo’s heritage in racing into this futuristic innovation."
The Nismo Watch will use a lithium battery and will be charged by micro-USB, with a battery life of over seven days under normal usage conditions.
Tags:
concept carNissansocial media