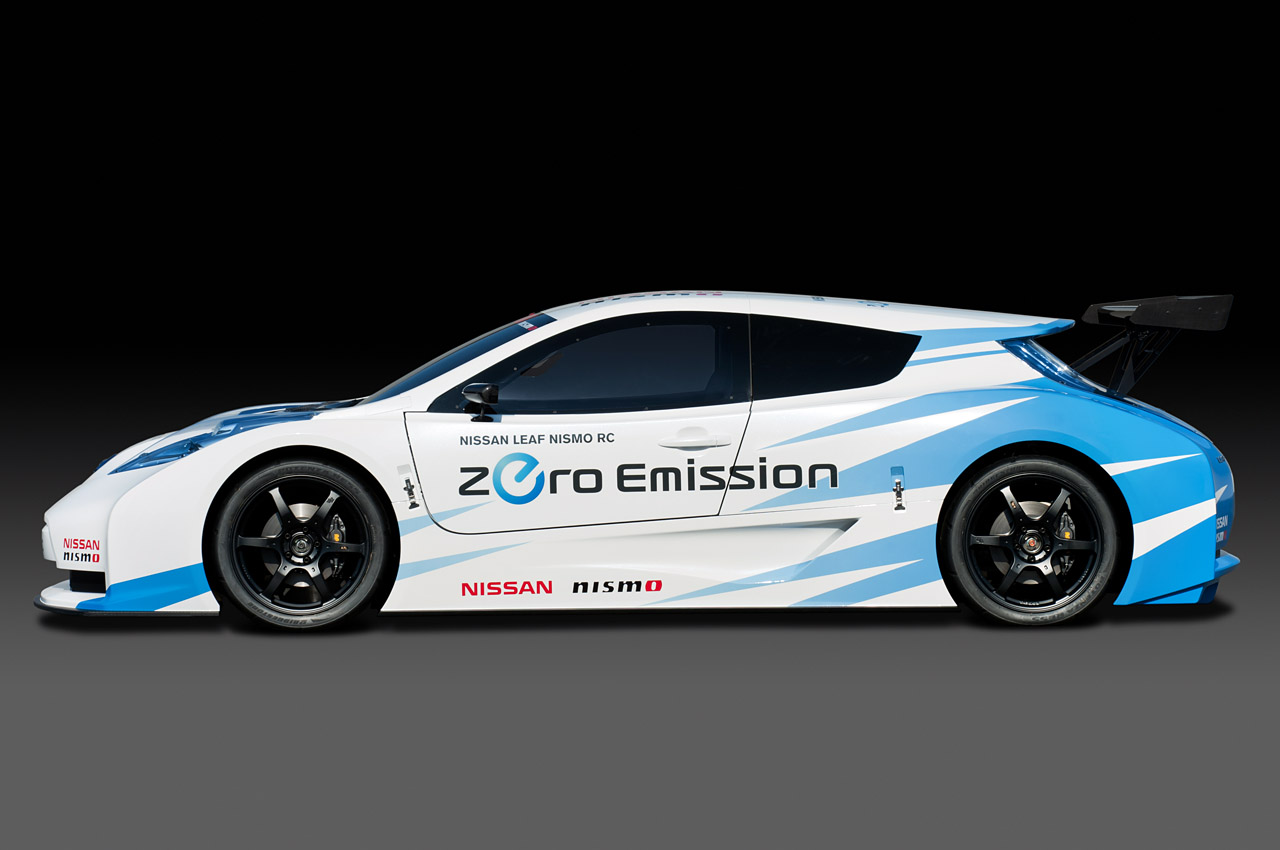 Nissan is using the occasion of the New York Auto Show to unveil a new conception of its Leaf EV—a thoroughbred racing electric that’s called the Leaf Nismo RC.

In this case “RC” is short for “Racing Competition” (yeah, we kind of thought it was going to be a radio-controlled boy-toy when we first heard the name, too), and the one-off EV is said to be pretty serious about going fast in a zero-emissions fashion. Just the sort of Greenformance-forward concept car that we love.

Similarity to the production version of the Leaf starts and ends with the lithium-ion battery pack—composed of 48 modules—and an 80kW electric motor that pumps out 107 horsepower and 207 pound-feet of torque.

The rest of the Leaf RC is pure racecar: the motor is mid-mounted, the bodywork is full carbon fiber monocoque, the rear wheels are the driven ones, and the overall size is much lower and wider. The RC is more than 13-inches shorter than the standard Leaf, and weighs in at only 2068 pounds (40-percent less than the road car). The result is sweet-handling racer with a sub-seven-second 0-62 mph time, a top speed of 93 mph, and a race-conditions running time of around 20 minutes.

The name on the back panel, just under the massive adjustable rear wing, says Nissan LEAF™. The powertrain is an 100% zero emission advanced Lithium-ion battery design, just like that found on the world’s first affordable mass market electric vehicle. And despite its lack of rear doors, rear seat, trunk, audio system, navigation, carpeting and other amenities, there is a discernable family resemblance. But that is where the similarities between the production Nissan LEAF and the Nissan LEAF NISMO RC end. As indicted by the "RC" – for Racing Competition – this new electric vehicle, which makes its world debut at the 2011 New York International Auto Show, is purpose-built to bring new meaning to the term "Racing Green."

Already a world leader in zero emission production vehicles with the late 2010 launch of the Nissan LEAF passenger vehicle in the United States, Europe and Japan, Nissan is now looking the racing world as a way to draw attention to the seemingly untapped potential of electric vehicles.

"Combining the talents of NISMO, Nissan’s world renowned motorsports group, and engineers behind some of the company’s Super GT and FIA GT1 race teams, the Nissan LEAF NISMO RC will serve as a rolling laboratory for the accelerated development of EV and aerodynamic systems, as well as a platform for the development of new green motorsports series," said Carlos Tavares, chairman, Nissan Americas, speaking at the New York International Auto Show.

Dimensionally, the race car features a 3.9-inch shorter wheelbase, is 0.8 inches longer and 6.7 inches wider. The most dramatic difference is height, with the NISMO RC sitting more than a foot (13.8 inches) lower than the production Nissan LEAF. Ground clearance is limited to 2.4 inches, compared to 6.3 inches for the road going car. And, at 2,068 pounds, the race car weighs in at about 40 percent less than the production vehicle.

The layout of the NISMO RC is also markedly different from the production sedan, offering a mid-ship location for the battery pack, electric motor and inverter – with drive to the rear wheels versus the production Nissan LEAF’s front-wheel drive. The NISMO RC also utilizes a double-wishbone suspension design front and rear and driver-adjustable brake balance. It rides on 18-inch 6-spoke wheels and P225/40R18 Bridgestone racing tires.

Like the production Nissan LEAF, the NISMO RC is powered by a lithium-ion battery composed of 48 compact modules and a high-response 80kW AC synchronous motor that generates 107 horsepower and 207 lb-ft of torque. It can be charged up to 80 percent of its full capacity in 30 minutes using the quick charging port located inside the rear cowl. And unlike other competition vehicles, the NISMO RC has no tailpipe, no emission of CO2 or other greenhouse gases while being driven, and no exhaust sound.

In preliminary testing the NISMO RC produces 0 to 62 mph acceleration in 6.85 seconds and a top speed of 93 miles per hour. It is projected to have a running time of around 20 minutes under racing conditions.

"There’s a perception among some people that electric vehicles fall on the dull side of the automotive enthusiasm scale – which is certainly not the case with either the production Nissan LEAF or this electrifying Nissan LEAF NISMO RC," added Tavares. "Nissan LEAF owners are fully embracing this new world of zero emission technology. We believe the same potential exists in the motorsports world as well, with Nissan proud to be first on the starting grid."

Tesla has released a timelapse video of its Tesla Semi electric truck completing a 500-mile trip with a full load on a single charge.

2023 Mercedes-AMG S63 E PERFORMANCE: The Most Powerful S-Class Ever

Meet the new Mercedes-AMG S63, a hybrid land-yacht making 791hp thanks to F1 technology.  That’s right, seven hundred ninety-one horse power, making it the most powerful S-Class ever made.