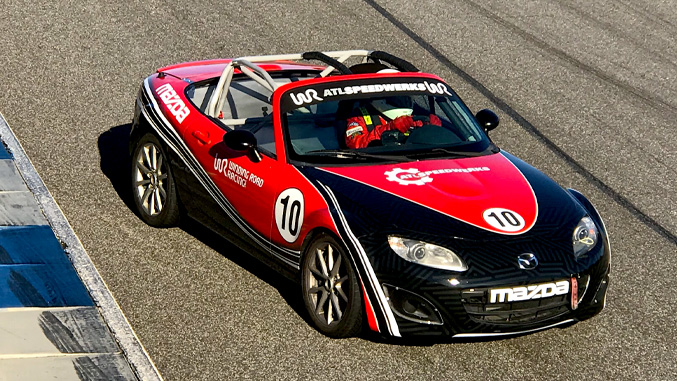 We are excited to see a new race series for 2018 that we think will be of interest to many of our readers. Positioned between Spec Miata and Global MX-5 Cup, Spec MX-5 gives drivers a new rung on the ladder system toward pro racing that will yield $100k in winnings to the champion. With full arrive & drive service, including a Spec MX-5 rental race car, Spec MX-5 is intended to be a cost-effective series focused on driver development. If you are interested in learning more, contact Jeff Sexton: [email protected] or visit: SpecMX-5.com.

Spec MX-5 will feature identically prepared NC generation (2006-2015) Mazda MX-5s, that are owned and maintained by both Winding Road Racing and Atlanta Speedwerks. Winding Road Racing will be conducting a 6 weekend/12 race Central series in conjunction with NASA events, while Atlanta Speedwerks will be hosting a 6 weekend/12 race Eastern series in conjunction with SCCA events. 10 drivers will be selected to compete in each series, with the top 7 drivers from each series coming together for the 14 car final event to determine the overall champion.

May 4-6 Circuit of The Americas (NASA)

High quality competition is a very important aspect of Spec MX-5 Challenge. To ensure fairness, drivers will be randomly assigned a different car each weekend, with procedures in place to ensure each car is identically prepared. Drivers will only be allowed to use one set of dry tires per weekend; an official tire manufacturer will be announced soon. Drivers will drop their lowest race finish from the points tally to account for any incidents, mechanicals, or missed races.

Mazda is integrating the Spec MX-5 Challenge into their industry-leading pro racing ladder system. “Mazda has done more for road racing in the United States than any other brand, and we are thankful that they have joined us in this venture to create a new series for drivers to showcase their talents and move up the Mazda ladder,” said Todd Lamb, owner of Atlanta Speedwerks.

With assistance from Mazda, the Spec MX-5 series will award the 2018 Spec MX-5 Challenge champion with a $100,000 scholarship toward running the Battery Tender Global Mazda MX-5 Cup presented by BFGoodrich Tires series in 2019. In addition, Mazda will pick one at-large nominee from the Spec MX-5 Challenge for the Mazda Road to 24 Shootout. “We are excited to assist Spec MX-5 in creating a bridge for driver talent to move from successful amateur classes like Spec Miata to Global MX-5 Cup and beyond,” said David Cook, business development manager, Mazda Motorsports.

Only available as an arrive-and-drive program, the cost for the season will be $45,000. This price includes Spec MX-5 race car rental, entry fees, transport, prep, trackside support, tires and consumables. “We have observed that costs continue to rise in all forms of racing, so we wanted to find a way to create an affordable arrive-and-drive series,” said Tom Martin, CEO of Winding Road Racing. “Our experience running professional teams has shown us ways to reduce costs for racers and we have incorporated that knowledge into Spec MX-5,” he said.

Mazda, Winding Road, Atlanta Speedwerks and many others in the racing community intend for Spec MX-5 Challenge to grow beyond the 2018 season. The series has plans to expand car count, race shop support and geographical coverage in 2019 and beyond. “Ultimately, we need to be running hundreds of Spec MX-5s to fulfill the vision of creating a new level of road racing,” said Martin. “With support from Mazda and other partners, along with a step-by-step strategy, we are confident that Spec MX-5 Challenge has a bright future.”

Winding Road Racing is a leading provider of road racing equipment and services. With locations in Austin, Los Angeles, Thunderhill and NCM Motorsports Park, and online at windingroadracing.com, the company offers a full line of safety and performance equipment from leading manufacturers like Stilo, AiM, Sparco, Bell, Schroth and Motorola. From shops in Austin and Sonoma, the company runs teams in Pirelli World Challenge and Global MX-5 Cup, as well as building cars and providing full service for NASA and SCCA drivers.

Free eBook: How to Learn a Track… Fast!