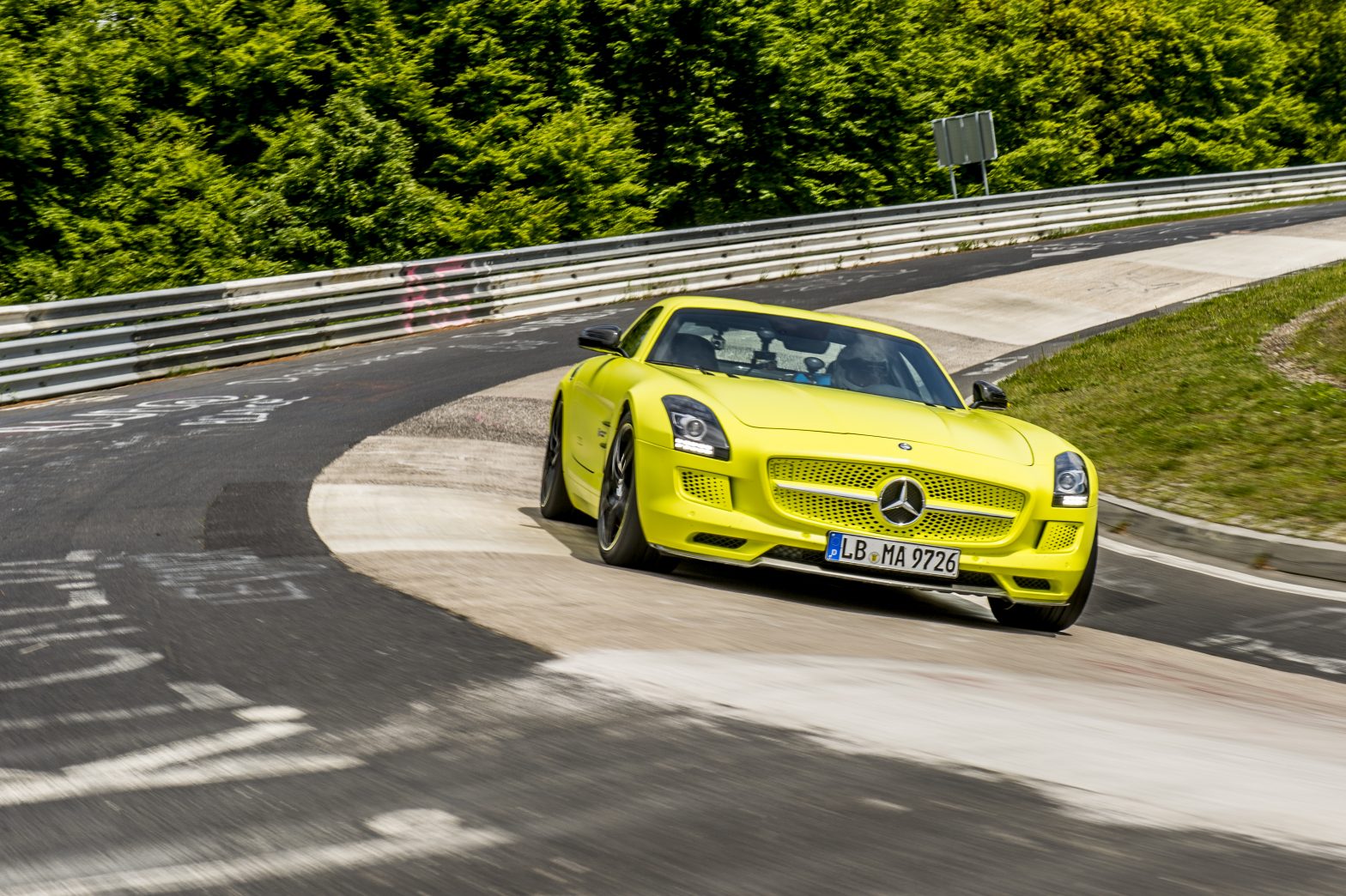 7:56.234 minutes. That’s the record lap time of the Mercedes-Benz SLS AMG Electric Drive on the Nürburgring, making it the first electric series production vehicle to make the loop in under eight minutes.
And this piece of forbidden fruit (alas, it is not slated to be sold in the US) looked pretty amazing doing it, with that brilliant yellow paint job.
The SLS AMG Electric Drive is an impressive performance car despite its green cred, with 751 horsepower and 738 pound feet of torque. It can sprint to 62 miles per hour in just 3.9 seconds, and is electronically limited to a top speed of 155 miles per hour. It has an impressive price tag, too, at the rough equivalent of $550,000.
Now, this is all well and good, but it’s hard to grasp how impressive the SLS AMG Electric Drive lapping the Green Hell without the actual sights and sounds. The stunning photography attached is nice, but luckily, there’s on-board footage of the event, so you can witness the bright gullwing whispering violently along one of the world’s most infamous tracks.
Scroll down past the video for more details in the official press release.
Mercedes-AMG establishes lap record in the "Grüne Hölle" ("Green Hell")
SLS AMG Coupé Electric Drive masters Nordschleife in 7:56.234 minutes
Nürburg/Affalterbach – The Mercedes-Benz SLS AMG Coupé Electric Drive circled the Nürburgring Nordschleife ("north loop") in a record time of 7:56.234 minutes. Therefore, the electric AMG super sports car is at the same time the first electrically-powered series production vehicle, which masters the legendary race track in under eight minutes. The record time of the SLS AMG Coupé Electric Drive was notarially certified. Two weeks after the first overall win for the Mercedes-Benz SLS AMG GT3 in the 24 Hours Nürburgring, a further member of the SLS AMG family impressively demonstrates its potential on the most difficult race track worldwide.

"Mercedes-AMG impressively shows the potential of the SLS AMG Coupé Electric Drive with the new record on the Nürburgring Nordschleife. Mercedes-AMG is the first vehicle manufacturer which makes it possible to circle the Nordschleife in under eight minutes with an electrically-powered series production vehicle. This record run is another proof for our constant innovative vigour," according to Ola Källenius, Chairman of Mercedes-AMG GmbH.

"For the first time, an electrically-powered series production vehicle circles the Nürburgring Nordscheife in under eight minutes. The record for the SLS AMG Coupé Electric Drive in 7:56.234 minutes on the Nordschleife shows the special position of our innovative and unique drive solution. With the extremely efficient battery technology deriving from Formula 1, four electric motors positioned close to the wheels, the individual wheel torques "AMG Torque Dynamics," the SLS eSound and our ambitious "AMG Lightweight Performance" design strategy, the SLS AMG Coupé Electric Drive generates a breathtaking sensation unlike any other model out on the road," according to Tobias Moers, Head of Overall Vehicle Development and member of the Board of Management of Mercedes-AMG GmbH.

The SLS AMG Coupé Electric Drive, with which Mercedes-AMG set up the record on the 20.832 kilometres long traditional race track in the Eifel, corresponds to the series version, which celebrates its launch in June 2013. The currently strongest AMG high-performance car has four electrical motors with a total output of 552 kW (751 hp) and maximum torque of 1000 Nm (738 lb-ft).

The gullwing car is therefore advancing to become the strongest and fastest electrically-powered series production vehicle in the world. The SLS AMG Coupé Electric Drive accelerates from zero to 100 km/h in a mere 3.9 seconds and can reach a top speed of 250 km/h (electronically limited).

A new dimension of driving performance – the AMG brand pledge is fulfilled to remarkable effect by the outstanding performance dynamics, which come courtesy of AMG Torque Dynamics and are made possible by the wheelselective all-wheel drive. The most "electrifying" gullwing model ever has been developed in-house by Mercedes-AMG GmbH. The extremely powerful highvoltage battery for the SLS AMG Coupé Electric Drive is the result of the collaboration between Mercedes-AMG and Mercedes AMG High Performance Powertrains in Brixworth in the UK and is setting the pace in energy density, power density and efficiency. Here, the British Formula 1 experts were able to draw on their extensive experience with KERS hybrid concepts.

The car’s agile response to movements of the accelerator pedal and the linear power output are a source of pure delight: unlike with a combustion engine, the build-up of torque is instantaneous with electric motors – maximum torque is effectively available from standstill. The spontaneous torque build-up and immense power delivery without any interruption in traction on the one hand are combined with completely vibration-free motor running characteristics on the other.

An overview of the most important data:

All-wheel drive with AMG Torque Dynamics offers new-found freedom
Four motors, four wheels – the intelligent and permanent all-wheel drive of the SLS AMG Coupé Electric Drive guarantees driving dynamics of the highest calibre, while at the same time providing the best possible active safety. Optimum traction of the four driven wheels is therefore ensured, whatever the weather conditions. According to the developers, the term "AMG Torque Dynamics" refers to individual control of the electric motors, something which enables completely new levels of freedom to be achieved. The AMG Torque Dynamics feature is permanently active and allows for selective distribution of power to each individual wheel. The intelligent distribution of drive torque has a beneficial effect on driving dynamics, handling, driving safety and ride comfort. Each individual wheel can be both electrically driven and electrically braked in accordance with the specific driving situation, thus helping to
The AMG Torque Dynamics feature boasts a high degree of variability and individuality by offering three different driving modes:
Manufaktur hand finishing at company headquarters in Affalterbach
Mercedes-AMG has installed a dedicated Manufaktur hand-finishing section for electric vehicles at its headquarters in Affalterbach for final assembly of the SLS AMG Coupé Electric Drive. The electrically powered gullwing model is assembled and readied for operation at a total of seven different stations. The entire logistics process is based in Affalterbach, too.

Production of parts such as the exterior and interior initially takes place at the Mercedes-Benz production facility in Sindelfingen. In Affalterbach, highly trained workers take charge of assembling the axles, electric motors, transmissions and cooling system components. Particular care is taken with the installation of all high-voltage components, such as the liquid-cooled lithium-ion battery, the accompanying cables, inverter and control units, and the onboard charger. Needless to say, the utmost standards of safety are applied during all work on high-voltage components. The operational check and extensive final inspection at the end ensure that the manufacturing and product quality offered by the SLS AMG Coupé Electric Drive is of the very highest order.

The SLS AMG Electric Drive is currently not planned for sales and distribution in the United States.