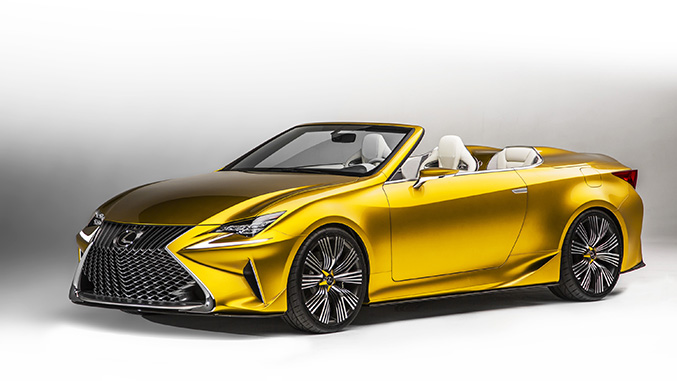 Lexus has unveiled their latest design study in the form of a 2 + 2 roadster that recalls the distinctive looks of the LF-LC Concept that debuted in Detroit in 2012, and the currently-in-production RC coupe, which has yet to see a convertible model added to its roster. Accordingly, it likely foretells both what to expect from the RC lineup as well as the future of Lexus design language, which looks to be staying the course with regard to its bold and angular styling.
The LF-C2 concept continues the current tradition of current Lexus models with its dominating centerpiece spindle grille along with a front fascia that has no shortage of interconnecting sharp angles and folds. According to Lexus, this complex design “would allow the LF-C2 to exude a different character when seen from different angles and under different lighting conditions.”

Jeff Bracken, Lexus group vice president and general manager says that while the LF-C2 is a concept, the design exercise was produced sheerly to draw attention:
"The LF-C2 concept shows what’s in store for our brand’s future design direction. This concept shows consumers around the world Lexus’ devotion to emotional designs as well as our passion for an exceptional driving experience.”
Inside, “functional simplicity” is the overriding theme, with an LFA-like instrument cluster and touchpad-controlled center display dominating the otherwise straightforward layout. Since concepts like the LF-C2 do not have to adhere to the constrictions of production necessities, to convey the concept’s open-air grand touring nature as purely as possible, it does not have a roof of any kind, leaving the transition between exterior and interior uncluttered with the traditional aesthetic compromises involved with stowing a folding roof.

Whether or not a vehicle based on the LF-C2 will be coming to market soon isn’t clear, but with the recent rollout of the RC lineup – all of which feature a fixed roof – it wouldn’t be a shock if the LF-C2 ultimately serves as the harbinger of a droptop RC. Check out the press release below for more details on the LF-C2 Concept.
Lexus LF-C2 Concept Dazzles at the 2014 Los Angeles Auto Show With World Premiere of 2+2 Roadster
Open Air Luxury GT Concept Explores The Lexus Brand’s Design Themes
November 19, 2014
LOS ANGELES – Nov. 19, 2014 – Beautiful sunshine, warm weather, and winding roads are the perfect complements to the Lexus LF-C2 concept that made its global debut at the 2014 Los Angeles Auto Show today. The LF-C2 concept is a design study in the form of a 2+2 roadster and explores key styling themes involved in the Lexus brand’s future, bolder styling direction. The LF-C2 is also a luxury Grand Touring concept inspired by the brand’s passion for driving.
"The LF-C2 concept shows what’s in store for our brand’s future design direction," said Jeff Bracken, Lexus group vice president and general manager. "This concept shows consumers around the world Lexus’ devotion to emotional designs as well as our passion for an exceptional driving experience."
The LF-C2 concept involves a highly styled 2+2 layout, and is derived from a pure and simple sports coupe idea. Its open-air design allows the driver and passengers to feel the wind through their hair, while enjoying the car’s performance characteristics on their favorite twisty road. As a roadster concept, the LF-C2 concept does not have any kind of top covering the cabin.
The exterior styling of the LF-C2 was influenced by the way various surface shapes interact with different types of light. Designers created edges, planes and curvature that would allow the LF-C2 to exude a different character when seen from different angles and under different lighting conditions. This objective when combined with Lexus’ layered paint process results in a striking and progressive interpretation of an open top luxury GT.
The brilliant, golden yellow is produced by a multi-layer paint process. The first coat is a primer, followed by silver, a clear coat, then the yellow that reflects off the silver to give the brilliant luster. A final top coat is then applied.
"We’ve been instinctively drawn to and inspired by those things that capture the beauty of light," said Yasuo Kajino, chief designer LF-C2, Lexus Design Division. "When you put something in the right light, people see it in a way they never have before."
The front fascia of the LF-C2 is highlighted by a more experimental expression of Lexus’ signature spindle-shaped grille. The concept’s grille features a refined braided mesh theme that exemplifies Lexus’ high level of craftsmanship and changes its appearance when viewed from different angles and lighting conditions. It sits between triangle-shaped LED headlights, a signature element of Lexus sports cars, and stylish indicator lamps that initiate the character line of the LF-C2. The character line sweeps through the car’s arrow-shaped body and ends at the abbreviated rear deck. Vents in the front bumper send cool air to the brakes as well as help manage airflow through the body to help keep the front end stable at high speed.
The LF-C2’s profile shows a swooping line from the car’s front bumper fin to the steeply-angled A-pillar. Small vents in the side sills direct air to the rear brakes and out the fin-like rear diffusers. The rear end of the LF-C2 is highlighted by Lexus L-shaped taillight bulbs, an exhaust system with chrome-covered quad exhaust tips, and an expressive new rear diffuser design. The concept’s impactful stance is planted by five-spoke 20-inch alloy wheels.
Step inside, and the LF-C2 treats its occupants to a luxurious and spacious cabin that flawlessly matches the sporty elegance of the exterior. The exterior extends into the cabin as the center console originates from the rear deck and runs down the length of the cabin all the way to the dashboard. The dashboard design is presents functional simplicity with an attractive-yet-straightforward instrument cluster, a central video monitor controlled by a Remote Touchpad on the center console and a classically-styled analog clock placed between the central air vents. The thick leather-wrapped steering wheel implies that this is a driver’s car, as do the form-fitting seats.
The LF-C2’s interior designers opted to instill a balanced atmosphere of power and simplicity that harmonizes with our primary senses. White-and-gray leather surfaces are soft to the touch while LED lights that run along the length of the interior below the windows. The inviting cabin of the LF-C2 blends the open-air excitement that results from an eye-catching roadster blended with a heavy dose of Lexus luxury.
LF-C2 Specifications
Length 4,715 mm 185.6 inches
Width 1,840 mm 72.4 inches
Height 1,385 mm 54.5 inches
Tags:
concept carLexus

Update: 2016 Jaguar F-Type Gets Manual Gearbox, AWD with Some Caveats