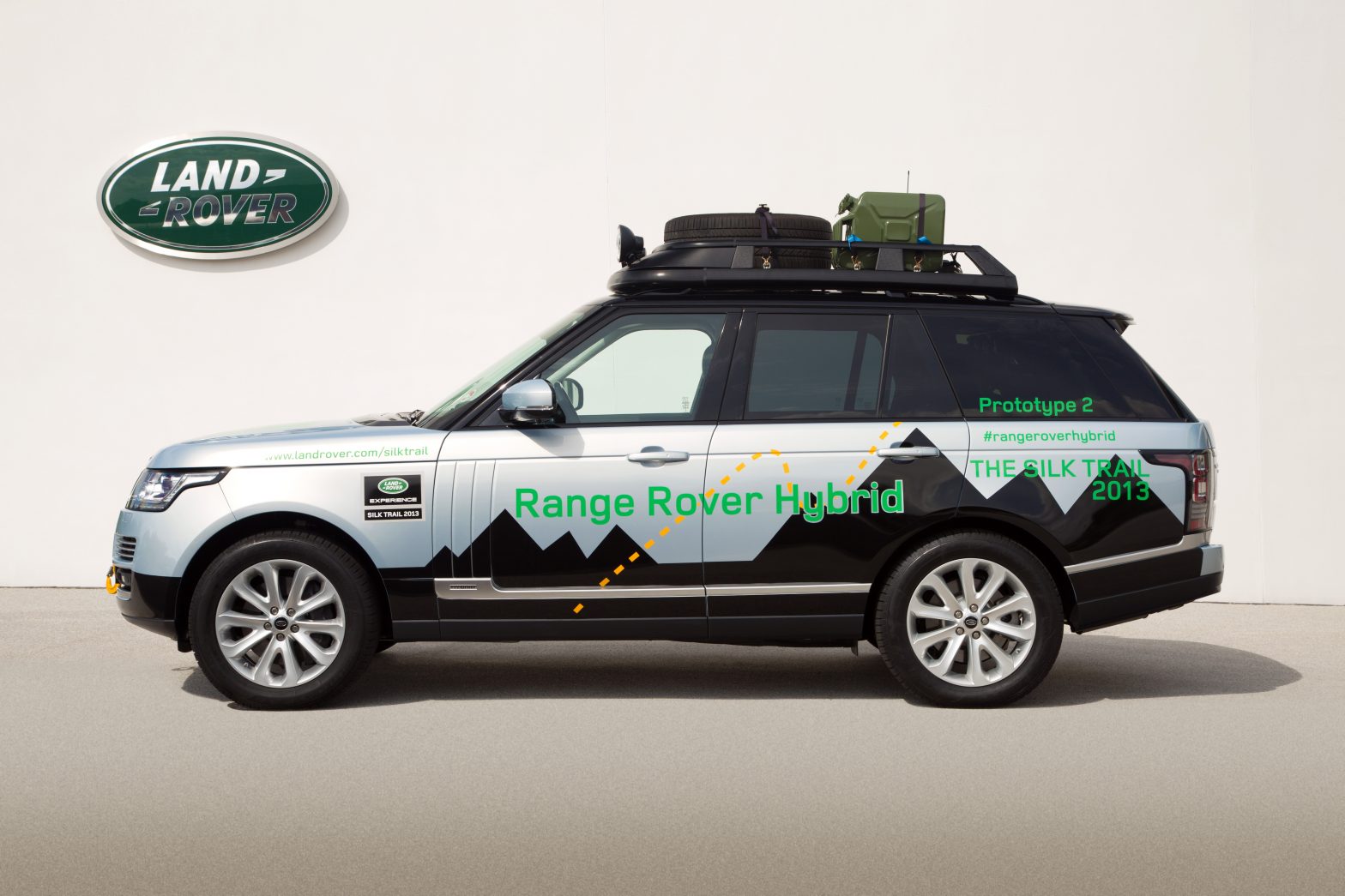 Land Rover has announced the launch of the Range Rover Hybrid and Range Rover Sport Hybrid, the first hybrid models for the brand. Three Range Rover Hybrids are also going on a Silk Trail 2013 expedition to show off their capabilities.
The hybrid powertrain combines a 3.0-liter diesel engine with a 35-kilowatt electric motor integrated in the eight-speed automatic transmission. The system provides a total of 335 horsepower and an impressive 516 pound-feet of torque (125 of which is supplied by the electric motor)—just the thing for traversing treacherous terrain.
The Range Rover Hybrids each jog to 60 miles per hour in under seven seconds, and have top speeds of 135 mph (Range Rover Hybrid) and 140 mph (Range Rover Sport Hybrid). The vehicles can run on electric power alone at speeds up to 30 mph and a range of up to a mile.
Despite the addition of the hybrid system, neither of the new vehicles sacrifices anything in the way of passenger space, cargo volume, or even a spare tire. The liquid-cooled battery pack is mounted beneath the floor, leaving the interior unchanged.
To kick off the new model, three Range Rover Hybrids will take part in an international expedition of nearly 10,000 miles, part of which takes place along the ancient Silk Road. The trip traverses some of the world’s great and difficult roads and trails through 12 countries in Asia and Europe.
Scroll down for more details and specifications in the press release, below.
Land Rover Launches Its First Hybrid Range Rover Models
Whitley, UK, August 21 2013 – Land Rover is launching its first-ever hybrid models – the Range Rover Hybrid and Range Rover Sport Hybrid – which will deliver outstanding fuel economy, significantly lower CO2 emissions and retain Land Rover’s renowned capability and performance. Order books in the UK will open from September 10 with first deliveries in early 2014, the two all-aluminium models are based on Land Rover’s Premium Lightweight Architecture and share an identical powertrain.  They are the world’s first premium diesel SUV hybrids.
"We are excited to introduce the Range Rover and Range Rover Sport Hybrids, the world’s first hybrid SUVs with legendary Land Rover capability.  The addition of a smooth electric drive enhances refinement, cuts CO2 emissions and delivers staggering performance on a par with our SDV8 engine," said John Edwards, Land Rover Global Brand Director.
To demonstrate the capabilities of the new hybrids, three Range Rover Hybrids will embark tomorrow (Thursday, August 22) on an epic trip, from the home of the Range Rover brand in Solihull to the home of the parent company Tata, in Mumbai, India.
This ‘Silk Trail 2013’ 16,000km expedition visits 12 countries and takes in some of the world’s most challenging roads, passes and trails, including part of the ancient, 4,000 mile Silk Road connecting Asia with the Mediterranean. These are the first hybrids to ever attempt this challenging route.
The new Range Rover Hybrid powertrain features three driver-selectable modes and combines Land Rover’s popular 3-litre SDV6 diesel engine with a 35kW electric motor integrated with the 8-speed ZF automatic transmission.  The hybrid system, including lithium ion battery pack, inverter and electric motor weighs less than 120kg.
The electric motor produces 170Nm torque to boost acceleration and drives the vehicle in EV Mode. The motor also acts as a generator, harvesting kinetic energy through regenerative braking, charging the battery when the vehicle is slowing.  In driver-selectable EV mode the Range Rover Hybrid can travel at speeds of up to 30mph (48km/h) for a range of up to one mile (1.6km) before the diesel engine seamlessly restarts.
Together, output of the diesel engine and electric motor is 340PS at 4,000rpm and a class-leading 700Nm torque between 1,500-3,000rpm, resulting in stunning SDV8-style performance.  Both models accelerate to 62mph (100km/h) in under seven seconds, deliver strong transient and mid-range performance with a top speed of 135mph (218km/h), combined with a 26 per cent reduction in CO2 emissions to 169g/km, equivalent to 44.1mpg on the combined cycle.
The latest generation Range Rover models have all been designed with the integration of a hybrid system in mind.  Consequently, the liquid cooled battery pack is mounted beneath the floor of the vehicle in a protective boron-steel cradle without impacting on the cabin or luggage space.  The Range Rover Hybrid has the same five-seat capacity and luggage space as the standard vehicle and retains the full-size spare wheel.  This no-compromise philosophy is echoed in the Range Rover Sport Hybrid whose interior is unchanged from the standard model, right down to the 5+2 seating.
Both hybrid Range Rover models continue to deliver a class-leading breadth of capability and versatility, enhanced by the exceptionally linear torque delivery from the powertrain and retaining Land Rover’s peerless four-wheel drive system including Terrain Response® 2, with uncompromised wading and ground clearance.
The ‘Silk Trail 2013’ expedition featuring the new Range Rover Hybrids is scheduled to visit France, Belgium, Germany, Poland, Ukraine, Russia, Uzbekistan, Kyrgyzstan, China and India.  The expedition will be broken into 10 separate legs, with the Range Rover Hybrid vehicles driven by teams of Land Rover development engineers and invited media – arriving in Mumbai on October 15.
Technical Specifications
Tags:
AsiaIndiaLand Roverrange rover sport