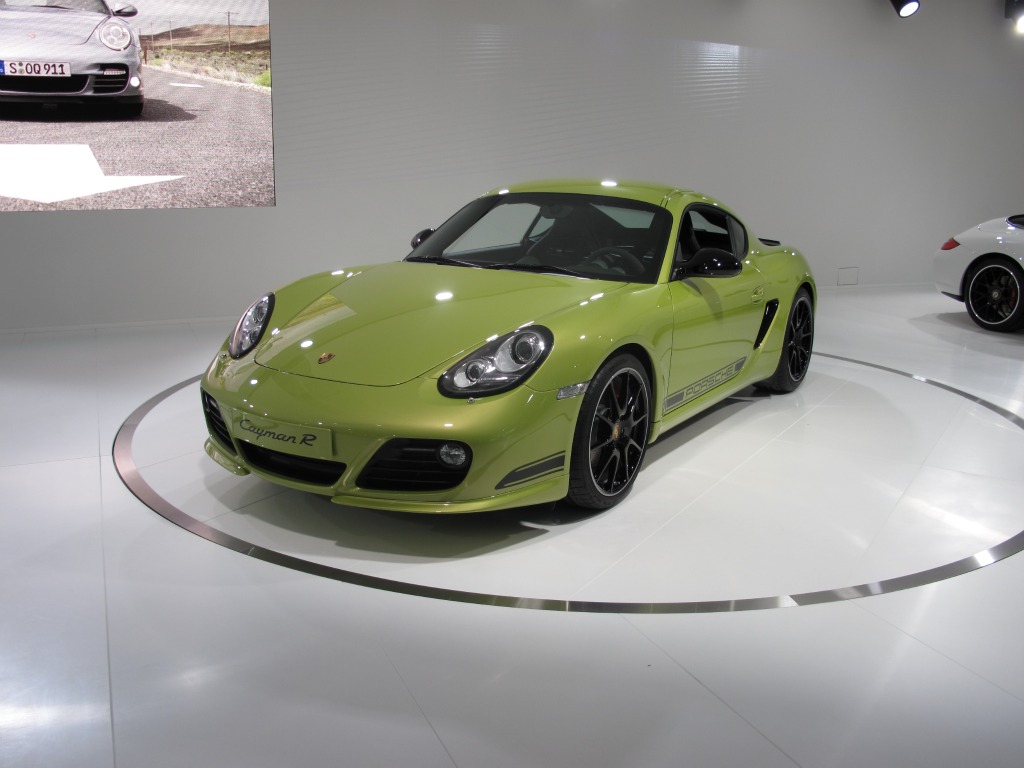 If the Boxster Spyder is a bit too showy for you, Porsche has a more conspicuous solution for you. The Cayman R receives a similar treatment to the Boxster Spyder, only with door handles instead of straps. The Cayman S’ 3.4-liter flat-six produces an extra 10 horsepower (320 in the S, 330 in the R), and a systematic diet work together to give the Cayman R a power-to-weight ratio of 8.58 pounds per horsepower.
For those disinclined to working the six-speed manual gearbox, Porsche will offer a seven-speed PDK. Manual transmission Cayman Rs can scamper to 60 miles per hour in 4.7 seconds on the way to a 175 mile per hour top speed, while PDK cars can get there in 4.4 on the way to 174 miles per hour.
To save weight, Porsche ripped out the air conditioning, put in aluminum doors ad carbon fiber-backed racing buckets. The Cayman R also receives a revised suspension, which lowers the car 20 millimeters, and a new aero kit to keep the car planted at high speeds.
The Cayman R will be available at your local Porsche dealership in February of 2011, at a starting price of $66,300.
Please scroll down for the official press release from Porsche.
2012 Porsche Cayman R Makes World Debut at Los Angeles Auto Show
New mid-engine coupe takes its purist cue from Boxster Spyder
ATLANTA – November 17, 2010 – Featuring 121 pounds less weight and the most horsepower available in a mid-engined Porsche, the 330-hp Cayman R has been created for one reason: pure driving dynamics. With its highly-tuned sports suspension and vigilant attention to weight savings, the third Cayman model offers an even more precise driving experience than the “standard” Cayman S. A direct descendant of the famous 1950’s 550 and 1960’s 904 mid-engined, high-performance Coupes, the 2012 Porsche Cayman R is celebrating its world premiere at the Los Angeles Auto Show November 17, 2010.
Light and Powerful
The newest member of the mid-engine family features the highly efficient 3.4-liter six-cylinder Direct Fuel Injection (DFI) boxer engine found in the Cayman S, but produces 10 more horsepower. With a six-speed manual transmission, the Cayman R sprints from a standstill to 60 mph in 4.7 seconds, two-tenths of a second faster than the Cayman S. With the optional seven-speed dual-clutch PDK (Doppelkupplungsgetriebe) transmission and the Sport Chrono package, the exercise is reduced to 4.4 seconds. Top track speed with the manual transmission is up by 3 to 175 mph (282 km / h), 174 mph (280 km / h) with the PDK.
The main objective in the concept and execution of the Cayman R was to improve the already energetic two-seater through a systematic reduction in weight, thereby increasing performance, driving dynamics and agility. With a DIN unladen weight of 2849 lbs. (1295 kg), Porsche engineers were able to achieve a power-to-weight ratio of 8.58 lbs. per hp (3.9 kilograms per hp) and with 8.8 lbs per hp (4 kilograms per hp) with the PDK.
More from Less
The greatest savings comes from the use of lightweight components and the omission of certain standard equipment not directly associated with driving performance.
In addition to the removal of the A/C and stereo, the driver-focused Cayman R utilizes a sports suspension system that lowers the Cayman R by 20 mm, helping lower center of gravity. Optional on the Cayman S, the Cayman R comes with a standard limited slip differential, front and rear spoilers from the Cayman Aerokit and special lightweight 19” wheels also found on the Boxster Spyder.
Lightweight aluminum door skins, carbon-fiber backed sport bucket seats and interior door panels from the 911 GT3 RS also contribute to the weight reduction. Black-framed halogen headlights, contrasting side mirrors and decorative "PORSCHE" side-stripes add to the unique appearance.
The 2012 Cayman R goes on sale in February 2011 and U.S. base pricing is $66,300.
About Porsche Cars North America, Inc
A wholly owned, indirect subsidiary of Dr. Ing.h.c.F.Porsche, Porsche Cars North America, Inc. and its 197 dealers offer U.S. customers some of the most technically advanced and high-performance vehicles in the world. Porsche is also synonymous with supreme quality and first-class customer treatment. Also, Porsche is fully and publically committed to being a leader in significantly lowering emissions, and saving fuel. The company’s guiding credo is “Porsche Intelligent Performance” and the goal is to prove that Porsche’s high performance and efficiency are not contradictory terms. A dramatic example of this is the highly-anticipated 918 Spyder – a super sports car that is also a planned plug-in hybrid. Of course this is nothing new for Porsche, which for 62 years has developed numerous technologies that have advanced vehicle performance, improved safety and spurred environmental innovations. Obviously, one expects such achievements from the most revered race car brand in the world — one that has accumulated more than 28,000 motorsport victories. Today, PCNA imports the cars that are the product of this great history, including the iconic 911 series, the renowned Boxster and Cayman mid-engine sports cars, the high-end Cayenne sport utility vehicles and the four-passenger Panamera Gran Turismo cars.
Follow us: www.twitter.com/Porsche and www.facebook.com/Porsche
Note: Photos are available to accredited journalists on the Porsche Press Database at http://press.porsche.com/. Video footage is available to registered users at http://thenewsmarket.com/porsche.
###
PR-10-67
Quick Specs:
Horizontally opposed 6-Cylinder, Mid-Engine
Displacement – 3.4 Liters
Bore – 97 mm (3.8 in.)
Stroke – 77.5 mm (3.05 in.)
Horsepower – 330 @ rpm – 7400
Torque – 273 lb-ft @ rpm – 4750
Compression ratio – 12.5: 1
Fuel tank capacity – 14.3 Gallons
0-60 (manual: PDK w/Sport Chrono PDK) – 4.7 seconds /4.4 seconds
Top track speed manual (PDK) – 175 mph (174 mph)
Tags:
2010 Los Angeles Auto ShowCaymanPorsche