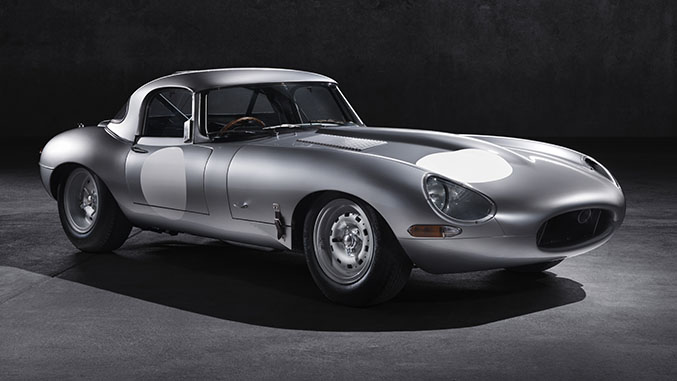 At today’s opening reception of the Concours D’Elegance, Jaguar’s Special Operations division unveiled the Lightweight Continuation E-Type cars that their team has set out to build. Between 1961 and 1975 a mere dozen Lightweight examples of the E-Type were built by the factory, and they remain some of the most coveted Jags in history. Jaguar had originally planned to build 18 Lightweights, and the Special Operations team wants to make good on that initial goal while staying as faithful to the original build process as possible.

Each of the six cars will be built to the specification of the last Lightweight E-Type delivered in 1964 and will be hand-crafted at a new Heritage facility located at Browns Lane in Coventry, England.
Based on the standard road-going E-Type, the lightweights lose some 200 pounds of excess weight in the pursuit of performance. To replicate the original cars to the most minute detail, Jaguar scanned the body of the last example built in 1964 and put together the tooling and materials necessary to replicate the build processes used in the 1960s. Jaguar says that 75% of the Lightweight E-Types’ components will be fabricated in-house, while the remain bits will be made using machinery built to Jaguar’s specifications off-site.

The continuation cars will use a triple carbureted, 3.8-liter inline six-cylinder engine based on the Le Mans winning D-Type’s motor, but the engine’s block will be made of aluminum rather than iron. Good for about 300 horsepower and 280lb-ft of torque, the grunt will channeled through a 4-speed manual with a single plate clutch, lightweight flywheel, and a Power Lok limited slip differential.