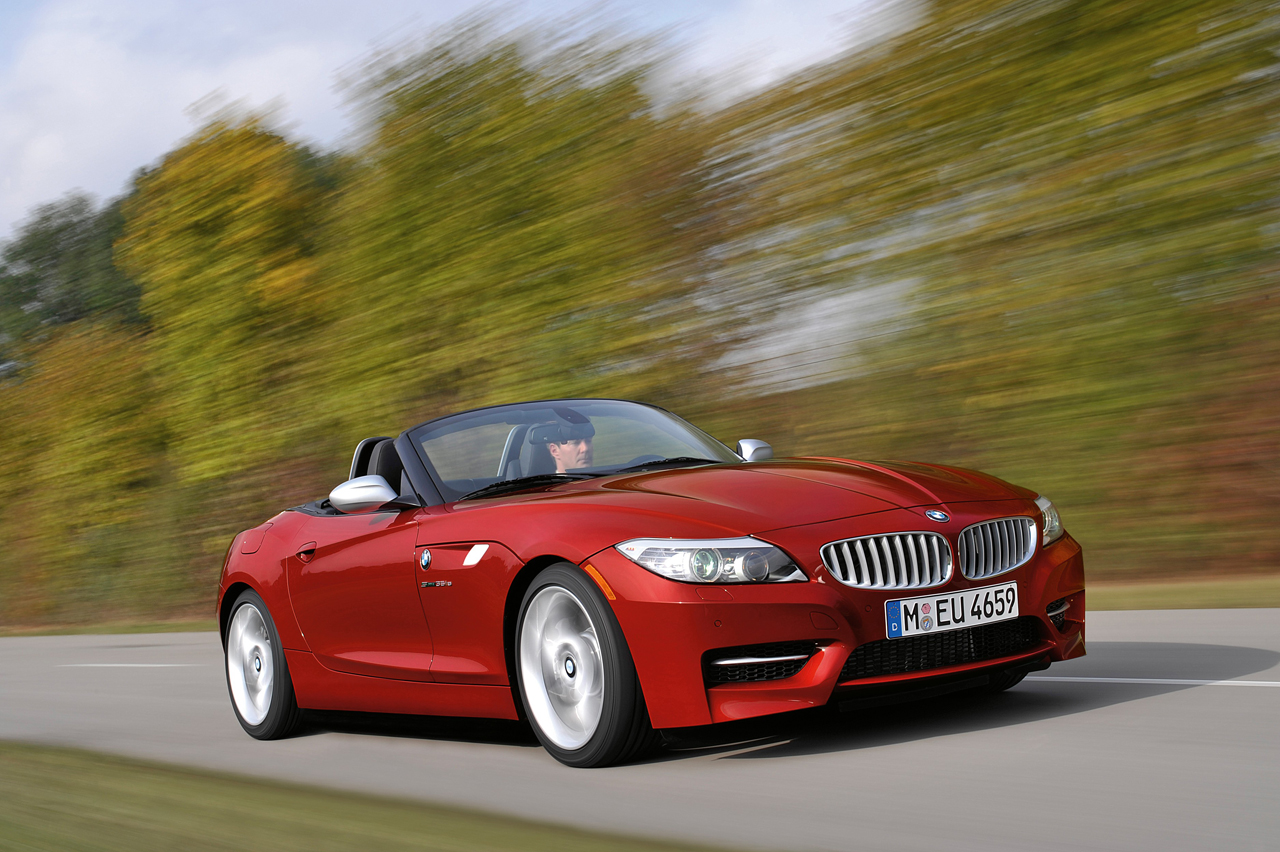 Is that you, M Roadster?

We’ve fallen madly in love with the new BMW Z4, especially the 35i with its twin-turbo inline-six and Boxster-hunting driving dynamics. And while we’ve secretly been hoping for an M-badged version, it looks like this new model, the sDrive35is, will be as closest thing we’ll get. (That’s fine.) Look for the 35is to make its official debut next month at the Detroit Auto Show.

The twin-turbo six is still intact, but a higher-flow intake and additional turbo boost means output is now rated at 335 horsepower and 332 pound-feet of torque (increases of 35 and 32, respectively). In fact, there’s even a bit of turbo overboost available for short sprints, resulting in 369 available pound-feet at times. BMW says the 35is will run to 60 miles per hour in just 4.7 seconds, and we’re willing to spend many days verifying that number ourselves.

Visually, a new M Sport aero package fleshes out the Z4’s body a bit, and a 0.4-inch lower ride height will be better for balance and the car’s overall center of gravity. The electric power steering has been reprogrammed, allowing for a better steering feel, and the Z4’s lovely seven-speed dual-clutch transmission will be standard.

Scroll down to read BMW’s full press release, and stay tuned for more details from the Detroit show in January.

Woodcliff Lake, NJ – Combining classic proportions with modern features, the BMW Z4 Roadster enjoys the top spot in its market segment. Now, the new BMW Z4 sDrive35is distills the Roadster’s performance potential to produce one of BMW’s fastest and best-handling Roadsters ever. The BMW Z4 sDrive35is is making its world debut as a 2011 model at the 2010 North American International Auto Show (NAIAS) in Detroit. It arrives at authorized BMW Centers in Spring 2010.

The latest Z4 model is characterized by instantaneous response to the accelerator pedal, fantastic sounds, and a free-revving spirit. The engine features increased air intake flow and increased boost pressure to release more power with the same standard of efficiency. The combination of twin low-mass turbochargers and High Precision direct injection offers an output a naturally-aspirated engine would only be able to provide through more cylinders and larger displacement.

The turbocharger system developed for the engine of the new BMW Z4 sDrive35is maintains a high output throughout the entire engine speed range. Nominal peak torque is increased to 332 lb-ft from 1,500 rpm to 4,500 rpm. Maximum output of 335 hp is delivered at 5,900 rpm.

The BMW Z4 sDrive35is offers outstanding power and performance without an increase in fuel consumption or emissions. Its figures are expected to match those of the BMW Z4 sDrive35i with Double-Clutch Transmission on the EPA test cycle. This balance of performance and fuel efficiency results from the fundamental design and layout of the BMW inline-6, which combines twin turbochargers with High Precision direct injection. The fuel injectors operate at a pressure of up to 200 bar (2900 psi), distributing fuel in a conical spray pattern throughout the combustion chamber. Another advantage of direct fuel injection is its cooling effect which allows higher compression while reducing the possibility of detonation.

Signature engine sound to accompany the surge of power.

The exhaust system of the BMW Z4 sDrive35is has been tuned specifically for this model. Acoustic engineering gives the car a very unique sound pattern across the speed range. This tuned sound is the result of special baffles and a unique set of mufflers. The sound is characterized by a deep rumble with a focus on the low frequency sound range.

Electric Power Steering (EPS) on the BMW Z4 sDrive35is features very sporty programming, focused to provide intense and clear steering feedback to the driver. This enables the driver to turn-in with remarkable precision and confidence at all vehicle speeds.

The standard 7-speed Double-Clutch Transmission (DCT) in the BMW Z4 sDrive35is combines the best in driving dynamics and efficiency. A highlight is the dual-mass flywheel, configured for the higher levels of power and performance. The DCT can shift gears without the slightest interruption of power to the rear tires, and offers a choice of automatic or manual gear selection. The programming of the DCT has been tailored to complement the sporty nature of the BMW Z4 sDrive35is at every level.

When shifting gears manually or within the SPORT and SPORT+ modes of the Z4’s standard Driving Dynamics Control, the transmission offers an exciting experience through faster gearshifts and a greater increase in torque before shifting. The DCT also features a Launch Control function for maximum performance when accelerating from a standstill. The DCT is controlled by an electronic gear selector on the center console and comes with gearshift paddles on the steering wheel.

Special 18-inch light-alloy wheels in five-spoke design round off the sporty character of the Z4 sDrive35is. 19-inch light-alloy wheels are available as an option. In addition to its unique wheels, the new model is further distinguished by a striking front bumper with a matte aluminum trim bar in each outer air intake, a rear bumper with accentuated surrounds on the tailpipes, and a rear diffuser finished at top in body color and black textured surface underneath.

The range of leather upholstery is being further enhanced by an additional color variant marking the launch of the BMW Z4 sDrive35is: All versions of the Z4 Roadster are now also available in Kansas Walnut leather as an option. The BMW Z4 sDrive35is is available with a choice of six paintwork colors. In addition to Alpine White and the metallic colors Titanium Silver, Black Sapphire, Space Grey, and Deep Sea Blue, the Z4 Roadster is now available for the first time in Melbourne Red metallic. Regardless of the color chosen, the exterior mirror caps on the BMW Z4 sDrive35is are always Oxide Silver.